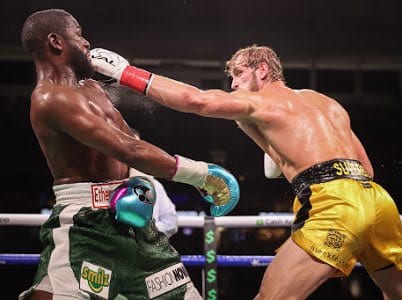 So the exhibition finally took place between Floyd Mayweather and Logan Paul Sunday night from the Hard Rock Stadium in Miami, Florida that ended in a draw over eight rounds. The draw result was met with a smattering of boos from those in attendance to the event that aired on Showtime pay-per-view

What went down in the ring had no bearing in the record books, as it was an exhibition and an unsanctioned bout. They even joked in the opening round of the fight that it was sponsored by the letters W,T, F so needless to say, this was treated as such.

So by all means, the action that played out as you expect from one fighter (Mayweather) who has a pro record of 50-0,  who is 44 years old and another that is 0-1 (Paul), who hadn’t met anyone at a high level of competition. Paul seemed gassed in the contest from the fourth round on, but was able to hang on for all twenty-four minutes.

This is normally where I’d lay out to you the in-ring action but the general story of the exhibition was that Mayweather over eight rounds was able to still showcase his defensive prowess over, Paul who threw more punches but was not landing anything of consequence.

“I had fun. You got to realize I’m not 21 anymore.It felt great to get in the ring with the younger guys,” Mayweather said to Brian Custer of Showtime after the exhibition.

“Even though he doesn’t have that much experience, he was able to use his weight to tie me up tonight,” Mayweather stated.

“This was one of the greatest moments of my life. I’m going to go home and think to myself, “Did he let me survive?” Paul said.”

The final punch stats showed that Paul was largely ineffective at landing anything on Mayweather. This, as he landed a grand total of 28 out of 217 total punches and just 7 of the 73 jabs he tried. Meanwhile, the older Mayweather was more economical and successful with 43 of 107 punches landed.

So, in the end, we learned that Mayweather is still hard to hit and mentioned that he’d be open to more of these exhibitions in the future. This was mentioned by his own accord as “legalized bank robbery” before the bell rang and I’d be shocked if we don’t see him in anymore of these.