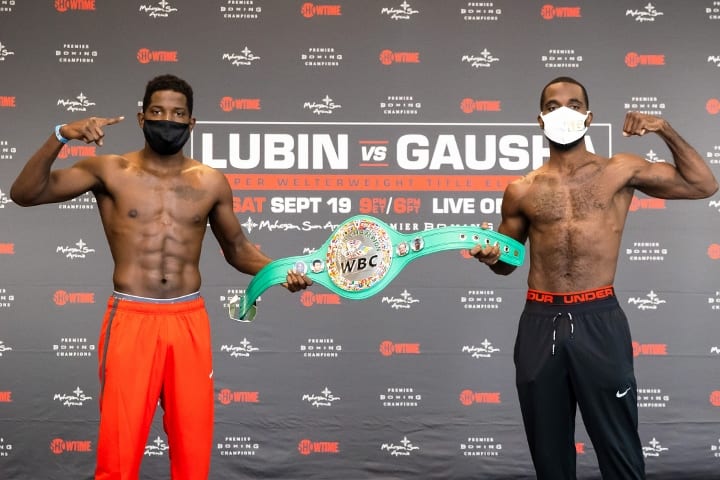 Lubin-Gausha a pivotal fight for both at 154

Showtime has a pivotal fight at 154 pounds as the main event is the WBC Super Welterweight title eliminator showdown between Erickson “Hammer” Lubin and Terrell Gausha on Saturday night.

Please make no mistake; both of them know the importance of this one as this has been in the works since last October.

What’s on the line in this title eliminator is simple. The winner of this bout will be one step closer to being the mandatory opponent to challenge the winner of Jermell Charlo and Jeison Rosario in their unification bout taking place next Saturday.

Listen to our latest edition of the Big Fight Weekend podcast, where we talk about this fight and out conversation with legendary referee Joe Cortez.

Lubin (22-1-0, 16 KOs) was last in the ring last October, taking on late replacement Nathaniel Gallimore and becoming too much for him winning by a wide unanimous decision victory. The original opponent slated was Gausha, but had to withdraw due to injury. Lubin made a note of this and took a cheap shot at him after the victory.

“At first, we had Terrell Gausha, but he fell out due to an injury. I don’t know what happened. I think he’s pregnant or something, Lubin said after the victory of Gallimore.

Crackbacks aside, Lubin, while speaking to the media this week, felt he saw something in Gashua’s game that he’d capitalize on in the ring.

“I think Gausha has some problems with southpaws, but I’m not focused on that. I’m focused on my game plan and coming out victorious Saturday night,” Lubin said on the media call this week.

“I have to go out there and win, but I also have to win in style. I have to look good winning. I feel like my advantage is that I’m more determined than he is. I’m younger, and I believe that I have the edge in almost every department. I know that I’m a couple of steps ahead of him.

A super welterweight war is set for TONIGHT 9PM ET on @Showtime and streaming LIVE on https://t.co/eUIShU9DR6. #LubinGausha pic.twitter.com/hlJv7KVFUV

Gausha (21-1-1, 10 KOs) last seen was in action taking on Austin Trout in Biloxi last year in a contest that while in my eyes, the broadcast on Fox Sports 1 and the fans at the Beau Rivage Resort & Casino thought he won, end with a split decision draw instead.  Despite that outcome, he still was slated to face Lubin in October last year but had to withdraw due to a hand injury. Gausha cleared the air about his hand, and he is ready to go Saturday.

“My hand has totally healed,” Gausha said this week, coming out of training camp. “I’m ready to go full-throttle, and I have no problems there anymore. The pandemic actually helped the healing process because I wasn’t using my hands as much. So I’m definitely 100% now.”

Speaking on the matchup with Lubin, Gashua mentioned how this would be a familiar style he’s seen as it would be another lefty he’ll face in the ring.

“There’s no pressure on me. I definitely want to let my hands go, but there’s no pressure,” Gausha said to the media this week. This will be my fourth southpaw in a row. So I’m more comfortable and familiar this time around.

“I like the style matchup heading into the fight with Lubin. He likes to stay busy and press the action, and I think that’s better for me and gives me a chance to catch him.

The sportsbooks have Lubin favored in this contest as a 6 to 1 favorite in most places in the closest fight of the night on the Showtime card. The consensus being age as Lubin being 24 to the 33 of Gashua. We’ll see if that will play any part of this as both look to get into the title picture tonight after this one.