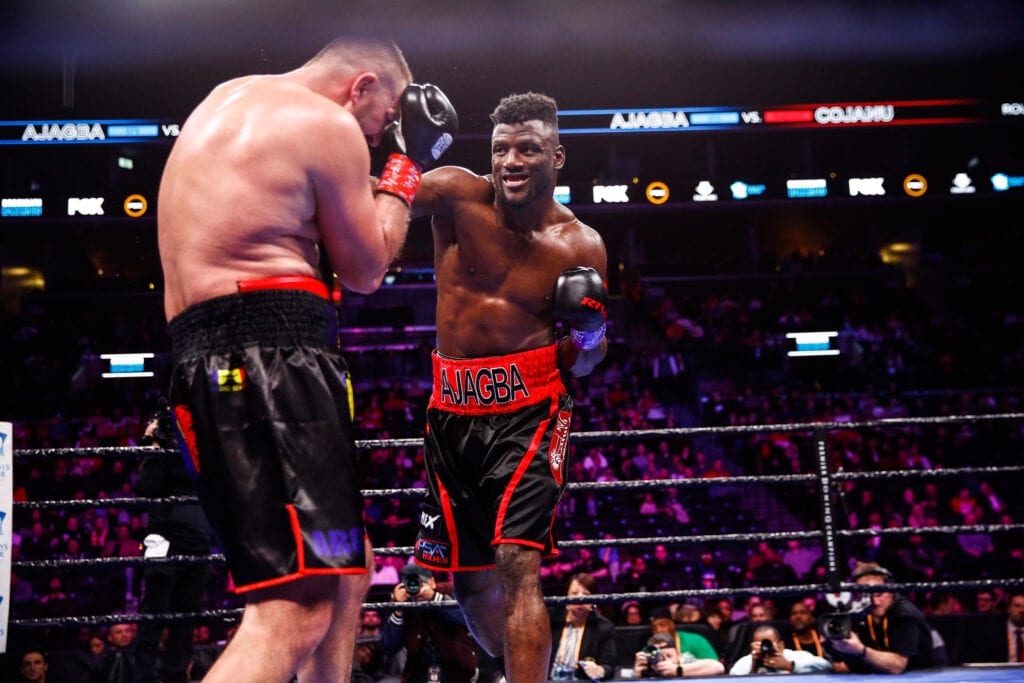 Nigerian-born unbeaten, Heavyweight Prospect, Efe Ajagba, has switched his allegiance to Top Rank Boxing and Saturday night he gets an opportunity to showcase himself on their latest Vegas “bubble” card.

Ajagba, 13 – 0, 11 KOs, did a deal with Top Rank earlier this Summer and will be the co-feature fight pitted against California journeyman Jonathan Rice (13 – 5 – 1) And, it’s a fight that he should be able to win fairly easily.

We talked more on the Big Fight Weekend Podcast with senior writer for the site, Marquis Johns, about Ajagba’s prospects for the short-term, now that he’s aligned with Bob Arum’s promotional company:

“What they (Top Rank, etc.) are looking for from Ajagba in this is he using his footwork? And, if he can ‘close the show out’ and pretty much “shorten the space on this guy.’ And if any of that happens, this will be quick work for Ajagba,” Johns told us.

Then again, anything can happen in Heavyweight boxing and Ajagba was involved in a wild fight in his last bout back in Brooklyn, NY, in March with Razvan Cojanu. That’s even though, he had scored an early knockdown of Cojanu, he was later rattled-nearly going down himself, before Ajagba came back to finish Cojanu in the ninth round for a TKO.

Ajagba came in around his usual weight Friday afternoon at 242 lb.

Don’t look for a similar test from Rice (who was a hefty 265 lb. Friday) tonight at the MGM Grand Conference Center, but it could still take Ajagba some time to get Rice out of there.

Ajagba who represented Nigeria in the 2016 Rio Olympics turned pro the following year and had been fighting for Premier Boxing Champions for the past two years. But, he is now is part of Top Rank’s young stable of Heavyweights that includes, the 2016 Gold Medalist from Rio in the Heavyweight division, France’s Tony Yoka. And also, unbeaten Italian Guido Vianello could be matched with Ajagba in the future, as well.

Chua targets Kambosos, Ng & Mackenzie Trilogyfe
Lubin-Gausha a pivotal fight for both at 154
Advertisement
To Top
We use cookies to ensure that we give you the best experience on our website. If you continue to use this site we will assume that you are happy with it.OkPrivacy policy