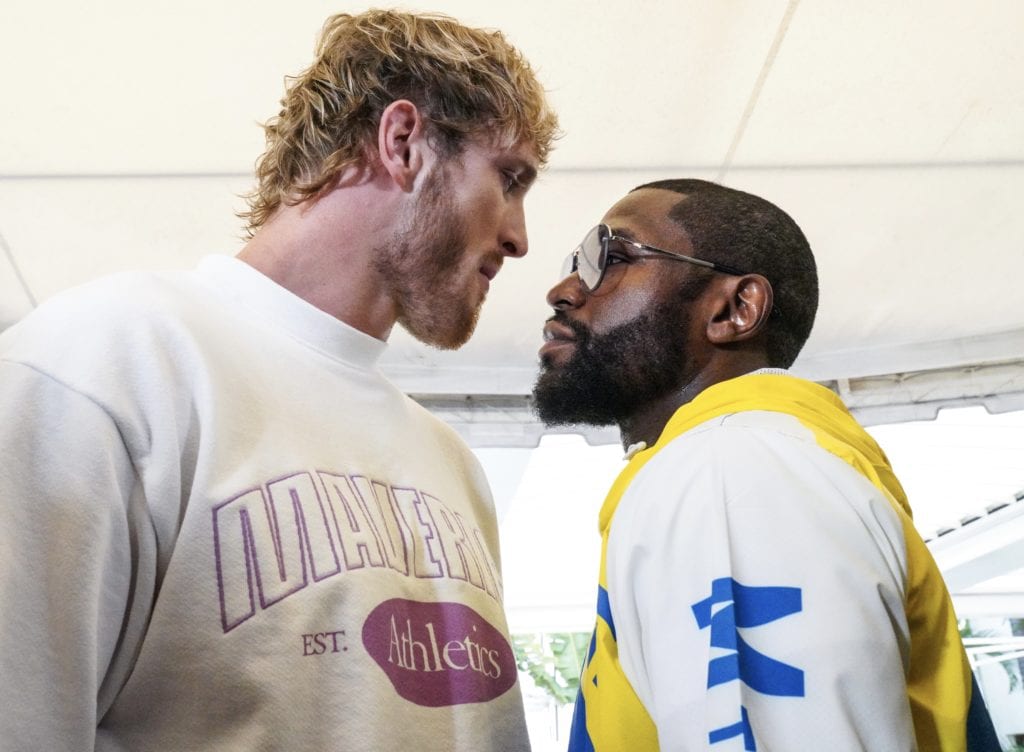 On Saturday Afternoon in South Florida, former five division world champ Floyd Mayweather and popular Youtuber Logan Paul both stepped on the scales prior to their Sunday night PPV exhibition bout. And, to no one’s surprise there was a wide disparity.

It had been understood that Mayweather, who fought most of his famed career from the Jr. Welterweight to Jr. Middleweight divisions (140-154 lbs.) would be giving up significant weight to Paul, who’s only previous fight in 2018 was at Cruiserweight (190 lb.). And, that was confirmed in the “ceremonial weigh in,”

As ring announcer Jimmy Lennon announced to the media and fans attending, Mayweather with a “ripped” 44 year old physique was 155 lb. Saturday. This after Paul just earlier was 190 1/2 lb. for the scheduled eight round exhibition.

“Weights don’t win fights. Fighting wins fights…..I’m not worried about a hat. I’m not worried about what people say. I’ve been at this top level for 25 years. So, I know what it takes, when it’s a fight of this magnitude,” Mayweather told Showtime’s Brian Campbell shortly off the scale.

However, there is a valid point that Mayweather has never had a fight, exhibition or otherwise, where the opponent has been this much bigger.  Still, Paul still has to demonstrate that he can actually do something with his size and reach on Sunday night at Hard Rock Stadium.

Hear us discuss Mayweather vs. Paul with Marquis Johns and Showtime’s Steve Farhood on this week’s Big Fight Weekend Podcast by clicking below.

The Mayweather-Paul bout will be eight, three minute rounds, however, it’s not a sanctioned fight due to the weight disparity. So, there will be no official judges or decision.  Now, the referee for the fight will have discretion to stop it or count out a knocked down opponent who doesn’t make it back up by ten, for a KO. And, it remains to be seen, if that will happen for either fighter.

Mayweather, who’s made over $200 million in the ring, is looking to cash-in, as he always has. This includes his last actual fight in the ring having been against MMA Megastar Conor McGregor, whom he defeated in a full-on boxing match in August of 2017.

There will be an expected crowd of at least 10,000 fans on scene and potentially a million or more who will watch on PPV.