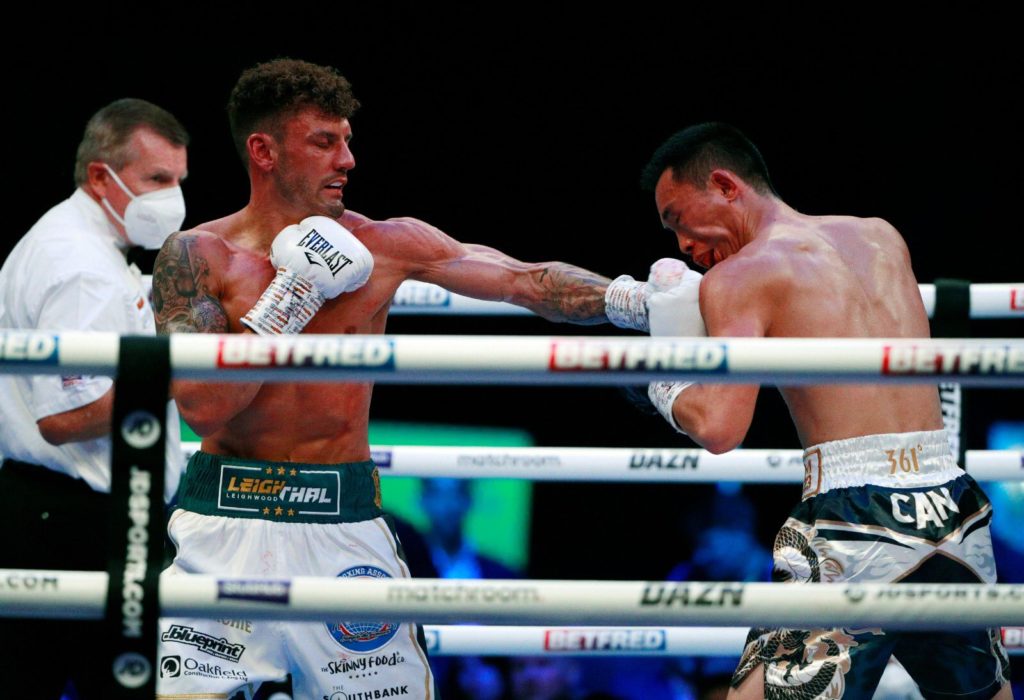 A version of the WBA Featherweight title was up for grabs at “Hearn Square Garden,” as Leigh Wood was able to stop Xu Can to win Saturday night by twelfth round stoppage in a slight upset.

The official time of the stoppage was 2:43 of the final round, as Wood captures the “regular” version of the WBA strap in the process.

The first fight card to start from Matchroom Sport’s “Fight Camp” series from their headquarters in Brentwood, Essex, England, bolstered this fight as the main event. This, as the originally planned fight between Conor Benn and Adrian Granados was scrapped due to Benn testing positive for COVID.

Can started off this fight showed the 21-month layoff outside of the ring, as the normal volume punching Featherweight didn’t do any of that and Wood was able to attack at a distance. Wood’s power had to have been an issue early on as it was a very timid start for Xu Can.

That picked up in the third as there were several good exchanges from there. The pace of the fight was clearly in favor of Wood but Can was getting going being able to land counter shots in close.  The biggest takeaway was the first half of the fight, Wood was able to land the uppercut seemingly whenever he felt like it.

As the second half of the fight began, the governing theme on the broadcast from the streaming service DAZN and the fight was when was Xu Can going to flip the switch and fire more like usual. That was wasn’t the case so far and he was only throwing shots 1 or 2 times at a time. Wasn’t his regular output and Wood was able to keep him at bay by punching around his guard of Xu Can.

It got to the point by the championship rounds, it wasn’t a matter of how wide of a win for Wood but rather the endless factors that played into the performance of Xu Can who just couldn’t get anything going against the backdrop of fans cheering for Wood at the Matchroom Compound.

Can Xu picked it up a little towards the end of the night but may have been too little, too late against Wood. This dream was also dashed as he was sent down with a right hand late in the final round. Can beat the count but after an onslaught of punches with no return fire, referee Marcus McDonell stopped the fight.

With the victory for Wood (24-2, 14 KOs), we’ll see what’s next for him as this will have him up higher on the featherweight food chain. A safe assumption is he’ll keep an eye out on the winner of Jazza Dickens and Kid Galahad taking place next week at Fight Camp for the vacant IBF title.  Can Xu after this defeat falls to 18-3.