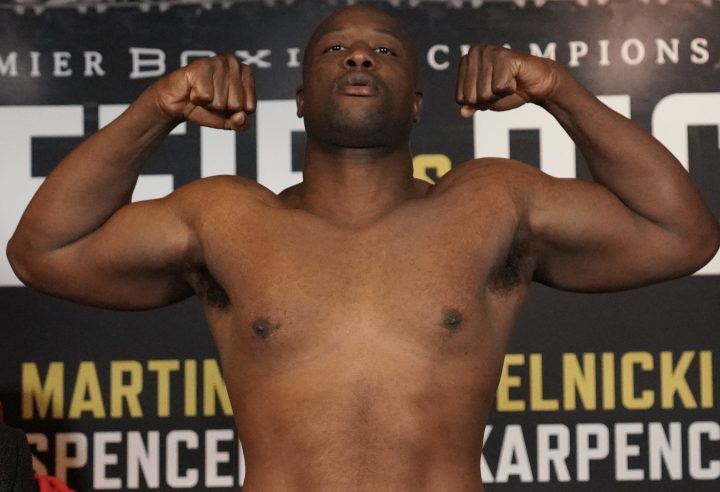 Heavyweight prospect Michael Coffie was given more than he can handle, as he was upset in the PBC on Fox main event by late-replacement Jonnie Rice in the fifth round from the Prudential Center in Newark, New Jersey.

The official time of the stoppage was 2:19 of the fifth round in which Rice was on top from the second he got in the ring.

The contest that aired on Fox Sports in the United States by Premier Boxing Champions had Rice come in after original challenger Gerald Washington had to withdraw due to COIVD 19.  What we got was Rice who was more than ready to step up, while as much as a 20 to 1 underdog before the opening bell.

Everyone watching once the opening bell rang figured this be a tough test for the 35 year old Coffie, who started boxing late after serving in the Marines. What we got instead and was noted heavily during the telecast was Coffie seemingly flat-footed through the contest. Rice however on the other hand was able to move around more fluidly and from the beginning was the more active fighter.

Rice was landing bombs from the onset as the night grew on, the punishment Coffie was absorbing was getting to him. By the time the fifth round came, many who were watching were wondering was this the same Coffie who took out Damian Rock in his last bout in three rounds. That answer was no, and as swelling upon Coffie’s left eye grew more apparent, so did Rice going in to close out the night.

That happened in the same fifth round as the referee Eric Dali grew concerned and asked Coffie if he was okay after he had taken several hard shots. It seemed pretty clear Coffie was having a hard time out of his left eye. What proceeded was a couple of overhand shots from Rice that stunned Coffie which forced Dali to step end to end the scheduled tenth-round contest.