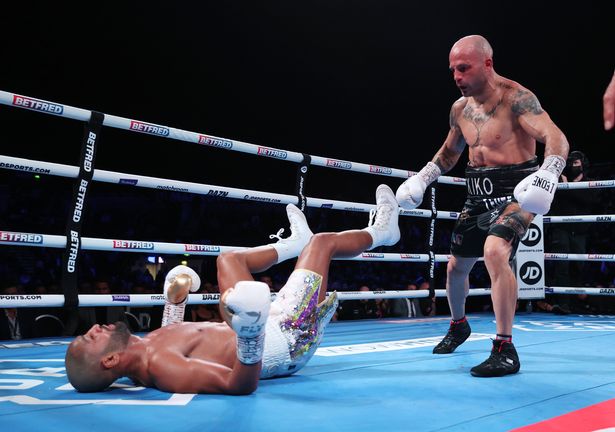 Martinez rallied after being dominated in the early rounds by Galahad, who even cut him over the right eye, but it all changed at the end of round five. That’s, when Martinez dropped Galahad with a hard right at the end of the round. Galahad beat the count, but was clearly hurt.

Then, after the 60 seconds in between rounds elapsed, Martinez landed another thunderous straight right just seconds into the sixth that dropped Galahad flat on his back unconscious. The referee waved the contest off. See it here,

KIKO MARTINEZ KNOCKS OUT KID GALAHAD WITH THE FIRST PUNCH OF THE SIXTH ROUND!#GalahadMartinez pic.twitter.com/ztiAREQKyo

Martinez was previously the IBF 122 lb. world champ with two title defenses in 2013-14.

The Sheffield resident Galahad, now 28-2, was making the first defense of the IBF belt he won by TKO over Jazza Dickens in August of this year. Galahad had previously lost for the only other time to Leeds’ Josh Warrington by split decision in a world title challenge for the same IBF championship in June of 2019.

It looked like it was going to be an easy night for Galahad, as he wobbled Martinez at the end of the first round and was in control with his jab and hand speed. Alas, it was yet another reminder that one punch can change everything and it did for Martinez.

Earlier on the Matchroom under card it was another KO shocker, as Michigan contender
Alycia Baumgardner scored a fourth round knockout of unified Super Featherweight ladies world champ, Terri Harper. The end came after Baumgardner scored a big right and series of follow up shots forcing the stoppage less than :30 in round four. Harper was making her fifth defense of her WBC belt, but  Baumgardner captured both the WBC and IBO titles with the win.