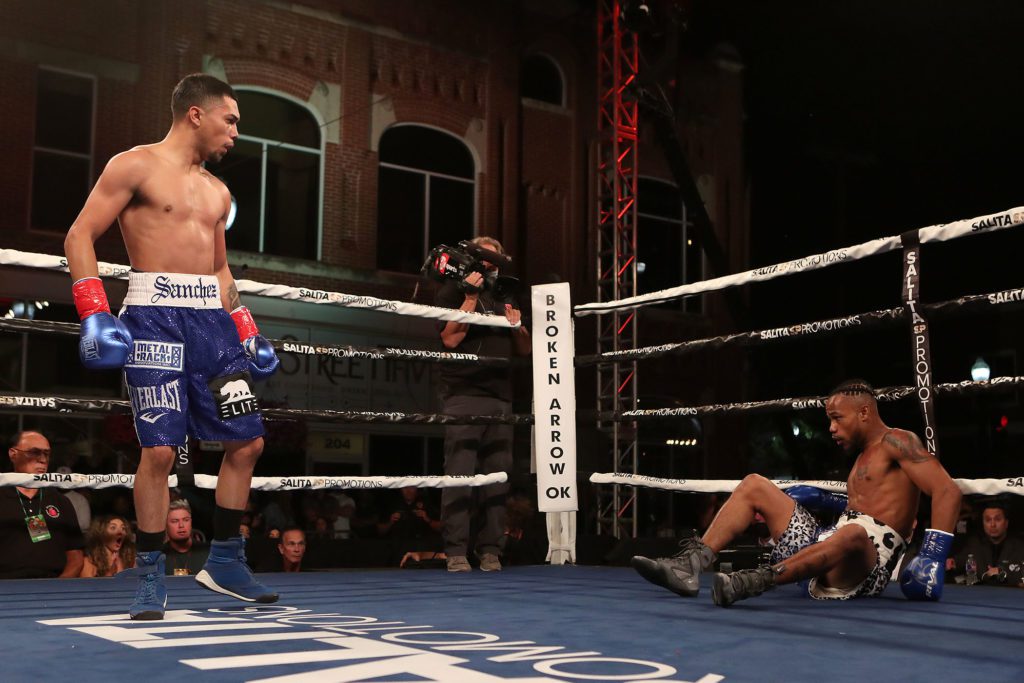 Red-hot bantamweight contender, Saul “The Beast” Sanchez (17-1, 10 KOs), of Pacoima, CA, coming off back-to-back first-round KOs on national television, is back in action as he will headline Thompson Boxing’s “Path to Glory” event on Friday, December 17, 2021, against Jose “Hollywood” Estrella (23-17-1, 16 KOs) of Tijuana, Mexico. The 10-round bout will serve as the main event of the evening.

This event will take place at the Doubletree Hotel Ontario, CA. Doors open at 6:30 pm PT with the first fight starting at 8:00 pm PT. Tickets are priced at $50, $75, & $100, and are available for purchase by calling 714-935-0900, or online at ThompsonBoxing.com. Fight fans will be able to watch all Thompson Boxing fights, weigh-ins, and behind-the-scenes content, via their new Mobile App downloadable on Apple and Google.

“I feel like I am going to the next level as my training with Manny Robles has now gotten me back-to-back first-round knockouts on national TV, with my last one being on ShoBox – which was a huge statement,” said Saul Sanchez, who is promoted by Thompson Boxing. “I am excited to fight back in the L.A. area and put on an entertaining show, as my march toward a world title is in full effect.”

In the 8-round co-feature, hard-hitting Ruben “Ace” Torres (16-0, 13 KOs), of South-Central Los Angeles, Calif., will square off against undefeated Francisco “La Roca” Armenta (12-0, 4 KOs) of Sinaloa, Mexico, in a battle of two unbeaten super lightweights.

“It is great to finish out the year on the right foot and be able to put myself in a position in the ratings next year,” said Torres. “I have big goals that I want to accomplish in this sport, it goes back to what my family believes in me, as well the time my coach Danny Zamora has put into me, and I have to live up to what they see in me. I want to be a world champion and will do whatever it takes to make it happen.”

“This is a huge opportunity for me that I won’t let pass by me, I know Torres well and I am getting ready to give him his first career loss,” said the Sinaloa’s Armenta while in training camp. “I want to show the people what I’m capable of and there is no better time than December 17.”

This event will stream live for free on the Thompson Boxing Promotions mobile app, website (www.thompsonboxing.com), as well as their Facebook and
YouTube pages, in addition to Fight Hub TV, our proud Media Partner.

Opening the card is super bantamweight Ivan Zarate of San Pedro, Calif (2-0), who will face an opponent to be named at a later date. (4-rounds)

Beto Duran will operate as the blow-by-blow commentator with expert commentary by Doug Fischer and Rich Marotta. Jessica Rosales will serve as the onsite ringside reporter.

For more information, regular updates on our fighters, events, and promotions, please visit ThompsonBoxing.com. You can also follow the conversation on social media, please use #ThompsonBoxing.