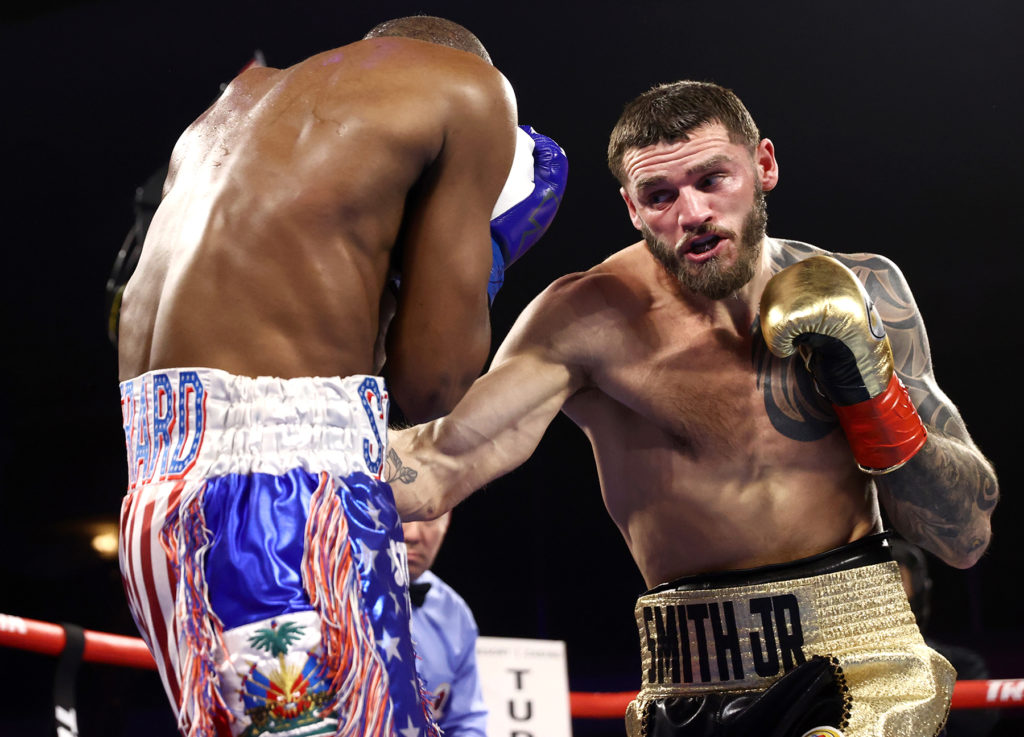 For many years Joe Smith Jr. maintained a singular goal for his boxing career. It was to win a light heavyweight world title.

He got an opportunity to fight for one in March 2019, but lost a wide decision to WBA titlist Dmitry Bivol despite badly hurting him at the end of the 10th round.

He continued to pursue the goal and rebounded with strong victories in a decision over Jesse Hart and a highlight-reel knockout of former world titlist Eleider “Storm” Alvarez to put himself in position for another opportunity.

Smith did not let the chance get away from him when he got it and in April 2021 he grinded out a hard majority decision win over Maxim Vlasov to win the vacant WBO 175-pound title.

Goal achieved. But now what for the 32-year-old “Common Man” from New York’s Long Island?

“Everything I’ve accomplished led me to a world title and I’m glad I accomplished that by becoming a world champion and now I have a new goal in mind,” Smith said. “I want to just keep working towards it and be the best I can be.”

That new goal is to unify world titles.

After making his first defense in January by one-sided ninth-round knockout of Steve Geffrard, a late replacement for Callum Johnson, who had come down with Covid-19, Smith pushed for a unification fight with WBC/IBF champion Artur Beterbiev, which Beterbiev was also very interested in.

“For awhile my team knew I wanted to fight Beterbiev and top guys,” Smith said. “I want to unify the division as quickly as possible. There hasn’t been a (four-belt) unified champion in the light heavyweight division so I would like to be the first to do it. But we got a long way to go.”

Hear us preview Beterbiev-Smith from our latest “Big Fight Weekend Preview” podcast by clicking play below,

Smith will have his chance to move close to that new goal when he faces fearsome puncher Beterbiev to unify their three belts in the main event of the Top Rank Boxing on ESPN card on Saturday (ESPN/ESPN Deportes/ESPN+, 10 p.m. ET) at the Hulu Theater at Madison Square Garden in New York.

“I got to get past Beterbiev. He’s a tough guy, but my team got it together quick. (Star Boxing promoter) Joe DeGuardia, he got on the phone and was making calls. I believe if I can beat Beterbiev and Bivol I could be recognized as one of the best light heavyweights ever,” said Smith, whose aim is to win Saturday and have a rematch with Bivol for the undisputed championship.

They are lofty goals but Smith, a tremendous puncher in his own right, is a decided underdog against Beterbiev, 37, a two-time Russian Olympian based in Montreal, in a fight most expect to be action-packed for as long as it lasts.

But mention his underdog status to him and Smith (28-3, 22 KOs) will literally laugh. He’s been down that road before.

An obscure fighter at the time, Smith was a massive underdog when he obliterated Andrzej Fonfara in the first round on national television in June 2016.

That victory led Bernard Hopkins, who was inducted into the International Boxing Hall of Fame last Sunday, to hand pick Smith to be his farewell opponent six months later. Again, Smith was the underdog and all he did was brutally knock Hopkins out of the ring in the eighth round and send him into retirement. Smith was the underdog against Hart as well and outpointed the Philadelphia contender.

So what about being the ‘dog again against Beterbiev (17-0, 17 KOs), who is the only active champion with a perfect knockout record?

“We both hit very hard but we’re also both very tough guys,” Smith said. “He’s been hurt before and he came back stronger in the next round where he looked great. I’ve been in tough fights where I pulled through and came back stronger in the next round, so the fight could be up and down. You don’t really know what’s going to happen. We both can box, we both have experience. I’ve been in a lot of big fights now so I feel I am ready for this and I can’t wait to see what happens.

“With our styles, it’s definitely going to be a crowd-pleasing fight. We’re both tough guys. We both have the will to win and we’re both very strong. I think the key for me to come out with a victory is for me to stay calm, relaxed, and patient and take it round by round, and I believe I’ll do it.”