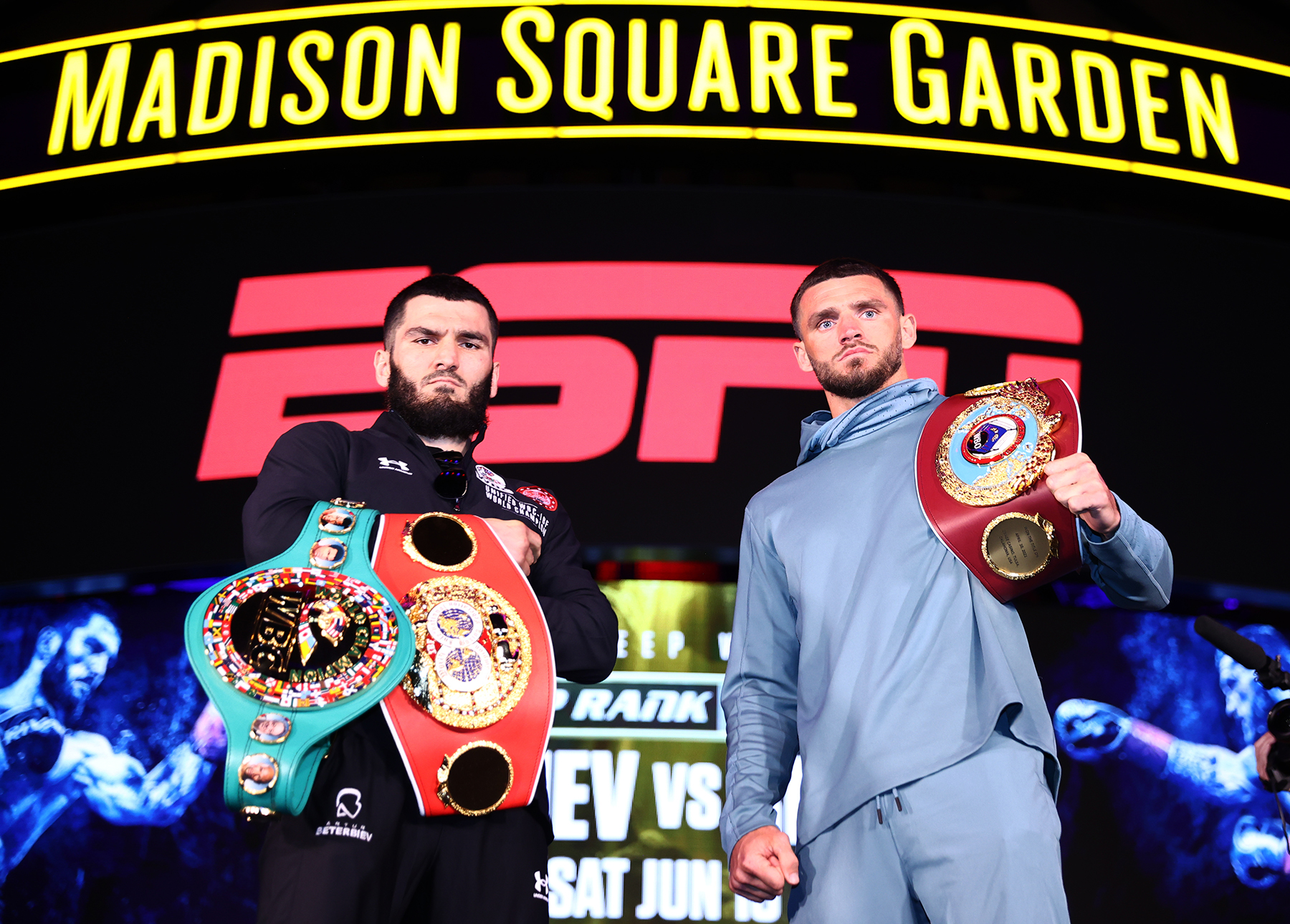 And, whether it’s Beterbiev’s KO streak or Smith’s storyline, there will be plenty of intrigue in this one.

At Thursday’s press conference, this is what the fighters and Top Rank chairman Bob Arum had to say.

“At my age, this fight brings me back so many decades to when Top Rank promoted the leading light heavyweights in the world like Bob Foster, Matthew Saad Muhammad, John Conteh, Eddie Mustafa Muhammad, and Marvin Johnson. The light heavyweight division has given people who follow boxing great thrills for as long as I’ve been promoting fights. Now we have this fight, which will go into the annals like all the great light heavyweight fights of the past and may even be the one that is the greatest.”

Hear Dan Rafael (who will be ringside at the Hulu Theater Saturday night) and me preview Betervbiev-Smith on our “Big Fight Weekend Preview” podcast by clicking below,

“Joe Smith is a tremendous fighter. He has a big heart. He has a lot of skills and a lot of punching power. And what can I say about Artur Beterbiev? He really epitomizes the ferocity that light heavyweights have been known for. Tremendous puncher. Big heart. A guy who refuses to lose. Nothing can be better than this. I predict that this fight will be considered the Fight of the Year for 2022.”

“If we compare it to the last one, this camp went very well. This camp was better. I want to thank my team, my conditioning coach, my boxing coach, all my team and all my sparring partners who helped me. We had a good camp.”

“We are both ready for this fight. I think it’s going to be a good fight. We will see. I can’t predict the future. I’m just a boxer.”

“This is a huge opportunity. Beterbiev is a huge name in boxing. Everyone knows who he is at this point. He has two world titles, and I want those belts. I believe this fight is going to be great. You’ve got two big punchers, and I’m just excited to be in there with him. He’s a great name.”

“I’m fighting at the Garden. Home is not too far from here. All my fans are going to be here to support me or, if not, watch at home. I’m just glad to be here defending my WBO title and unifying two other belts.”

In the highly anticipated 10-round featherweight co-feature, two-time Cuban Olympic gold medalist Robeisy Ramirez (9-1, 5 KOs) steps up against the unbeaten Abraham “El Super” Nova (21-0, 15 KOs). Ramirez has won nine straight bouts since a shocking loss in his pro debut, while Nova has settled in at featherweight after spending the first five-plus years of his career campaigning at junior lightweight.

Beterbiev-Smith Jr. and Ramirez-Nova will be broadcast live on ESPN, ESPN Deportes and ESPN+ at 10 p.m. ET/7 p.m. PT.

Golden Boy Confirms Vergil Ortiz August Return
Joe Smith Has New Goals To Fulfill Starting Saturday Night
Advertisement
To Top
We use cookies to ensure that we give you the best experience on our website. If you continue to use this site we will assume that you are happy with it.OkPrivacy policy