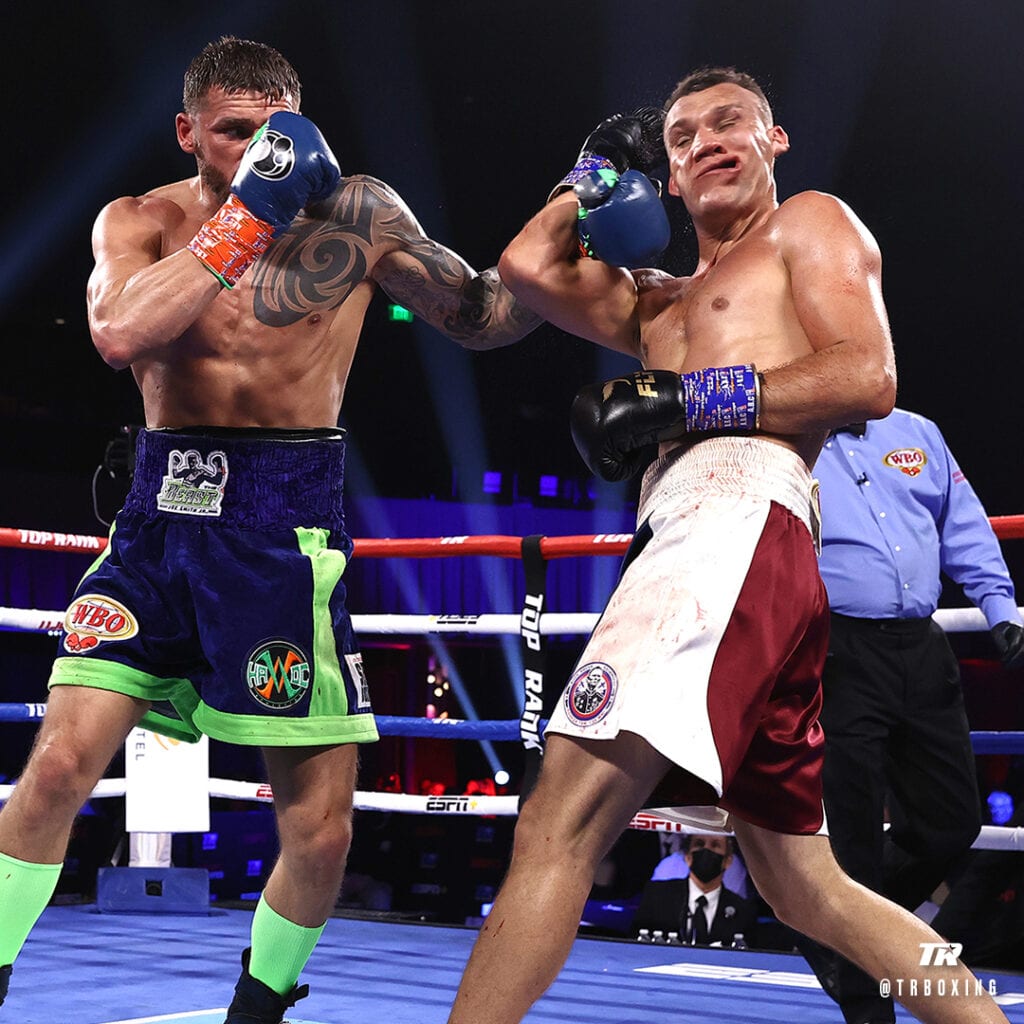 The wait was finally over, and the WBO Light Heavyweight title is now in the hands of Joe Smith Jr., as he defeated  Maxim Vlasov to close out the ESPN broadcast airing from the Osage Casino in Tulsa, Oklahoma.

The title fight was the first outside of the Top Rank “bubble” of Las Vegas and had about 500 fans in attendance to give the fight that sound of fans that weren’t available at a piece of a button or soundboard.  In the ring, a fight that was delayed from February started with Vlasov using his movement to disrupt Smith.

The second round was a concerning one as Smith looked to land to the body, but the rhythm of Vlasov was still causing issues. That was until Smith caught him with overhand right near the end of the round that looked to have hurt Vlasov a bit. A cut started to was getting worse as the fight went on over the left eye of Smth that started as well. The third round showed Smith still landing shots on Vlasov behind chants of “USA, USA” to back the Long Island native.

Despite being the underdog and fighting away from home, Vlasov was still able to land by throwing in bunches against Smith. The talk from his end led up to the fight as he felt Smith was predictable, and Vlasov looked to be firm in control after the first three rounds of this fight. Vlasov, who had to pull out of the original date of February due to COVID, didn’t look in the ring someone who had its effects in the ring, something we couldn’t say about when we saw Alexander Povetkin against Dillian Whyte.

Wild contest and was a fight continued, and by the end of the sixth round of the slugfest shown Vlasov sporting a busted lip from the shots, Smith was landing. The seventh-round Smith seemed to have Vlasov in trouble landed a chopping right hand that staggered him. Smith continued to dig to the body and was warned a second time in the fight for low blows. The fight passed on, and the seventh may have been a huge turning point in this fight.

As the fight grew into the championship rounds, Smith seemed to be fading and unable to muster anything on Vlasov. There was controversy late, as a Smith hit to the back of Vlasov’s head near the closing moments of the eleventh round sent him down.

This wasn’t ruled a knockdown, and he was given a few moments to capture his breath, which had the broadcast pan over to an irate Top Rank matchmaker Carl Moretti and Smith’s co-promoter Joe DeGuardia flipping out at referee Gary Ritter.

This was not his best night in the ring.

The fight resumed and Smith squeaked out the decision win.

With the win, Smith is lined up for a unification bout against WBC/IBF champion 175 lb. champ, Russian Artur Beterbiev. We’ll see when and where that fight happens later this year in what should be a fun one for light heavyweight straps.