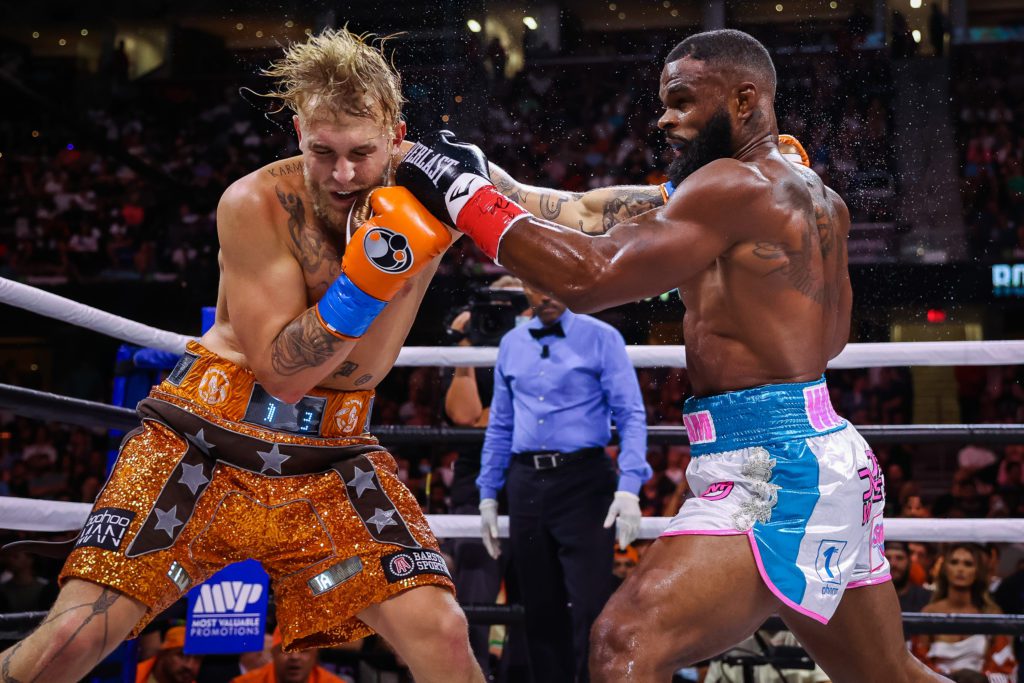 Paul was pushed the distance for the first time in career and even survived getting shaken up by a Woodley right that nearly sent him through the ropes. But in the end, he was the taller, younger and more polished fighter, who did enough to win.

This was the fourth pro bout for the Ohio native Paul, who had previously demolished former amateur wrestling champ Ben Askren in a single round in May. He also kayoed former NBA basketball player Nate Robinson in the second round last November.

Woodley, who was the former UFC Welterweight champ for over three years in the last decade, was credible, but not very skilled in terms offense and putting punches together. However, the near 40 year did do something that Paul’s three previous opponents could not- he shook Paul with a good right hand in the fourth round.

Paul was sent through the third and fourth strands of ropes before grabbing on to keep from falling over. It was not ruled a a knockdown and Woodley could not follow up.

Paul controlled most of the fight at distance landing many more jabs and occasional right hands. He did enough to win, but was far from impressive only landing 35 “power” punches over the eight rounds. Woodley wasn’t much more effective, but did total 41 “power” connects in the bout.

“I don’t know what to say. He’s a tough opponent. He’s been boxing, fighting, striking- whatever you want to call it for 20 years. I’ve been doing it for three years,” Paul told Showtime in the ring.

“This one’s for my city. This one’s for Cleveland….My legs felt weird, since the locker room. I don’t know what’s wrong with me, but he’s a tough opponent. All respect to Tyron.”

Clearly, Paul brought attention and eyeballs to this one, as the downtown home of the Cavaliers, the Rocket Mortgage Fieldhouse had an announced crowd of 16,000. We’ll wait for the Showtime PPV numbers to trickle out in the coming days. The Paul-Woodley main event had been hyped for weeks and also featured women’s World Featherweight Champ, Amanda Serrano winning by decision and young, British Heavyweight contender, Daniel Dubois, scoring a first round KO in his U.S. debut.

However, the main event was far from a great fight, and Paul clearly showed that he has work to do, as an opponent who was in shape and stood up to his previous booming right hands, was able to take him the full distance Sunday night.

Now, we’ll see if Paul chooses to fight an experienced boxer in his next fight or soon? Or else, he risks losing most of his leverage to have fans care about his fights.