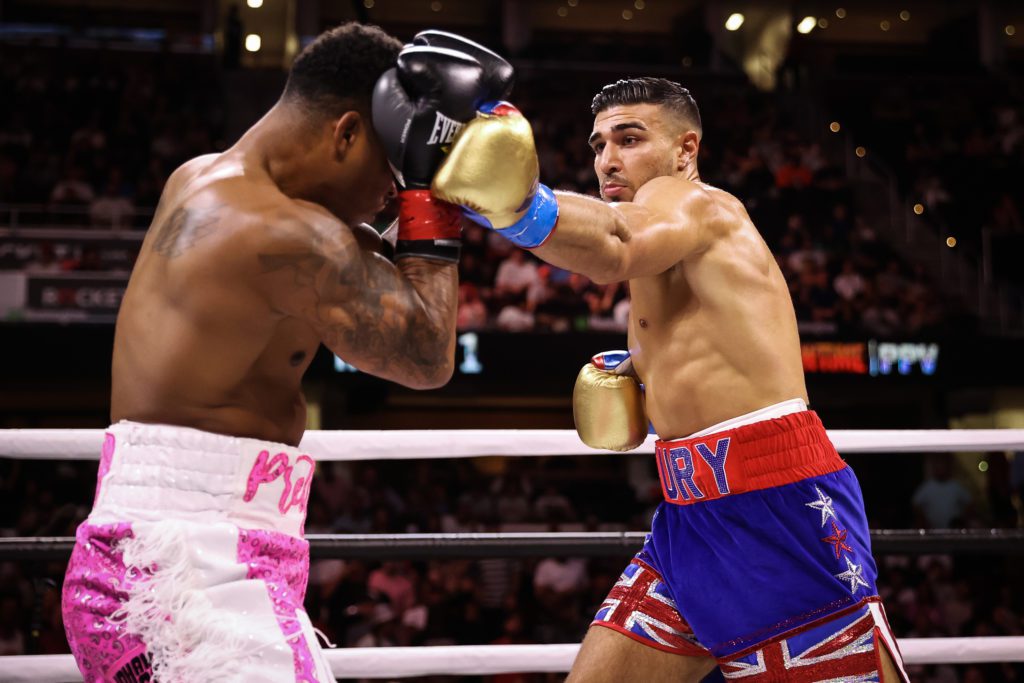 Once the lovefest for Youtuber/Social media star turned boxer Jake Paul had ended in the Cleveland ring Sunday night, a potential opponent who had fought on the undercard was waiting in the hallways by the dressing rooms. And, Tommy Fury made clear that he wants the internet popular Paul, next.

First, as we wrote Sunday night, Paul ran his record to 4-0 as a professional fighter with a sloppy decision win over former UFC Welterweight champ, Tyron Woodley. While Paul got the official nod on two of the judges cards for an eight round split decision, he didn’t get his big, early knockout.

In fact, the biggest punch was landed by the 39 year old Woodley with a hard right sending Paul through the third and fourth ropes in round four. Alas, Woodley was unable to follow up in that round or the rest of the fight. And, Paul scored enough with his jab and occasional punches to get the victory.

However, the Cruiserweight Fury, the younger half brother of WBC Heavyweight Champ Tyson Fury, had already won his own fight on the undercard.  And, he was waiting for Paul to emerge backstage, post-fight.

Here’s the video of their brief encounter, as enough security to secure downtown Cleveland, proceeded to get around and between them,

"You need to stop running my friend!"

"Take the fight!"@tommytntfury and @jakepaul finally came face-to-face backstage and it was absolute chaos! 👀 pic.twitter.com/1398ZTZzMZ

The 22 year old Tommy Fury ran his record to (7-0) beating former MMA Lightweight fighter Anthony Thomas in a four round decision. The bout was only scheduled for that length, as it was Thomas’ first boxing match in over three years and only his second ever. Fury has fought in scheduled eight rounders in the past.

While he landed the cleaner punches and won easily, it wasn’t the impressive KO the Brit had hoped for in joining up on Paul’s undercard.

Still, he wasn’t going to pass on the chance to confront Paul,

“Listen, you need to stop running my friend,” Fury said while he stood nose to nose briefly (tweet above) with Paul. Then several people and security crowded around and between them to interrupting the “trash talk.”

Still, a few seconds later, Fury got again off,

“You wanna keep running or take the fight?” Paul replied quick, “you can barely be my sparring partner.”

Then Fury summed up everyone’s assessment of Paul not wiping out Woodley,

“You could barely beat a guy that’s never been in a F#@K^&g boxing match…. Take the fight! Take the Fight!, “ Fury continued to shout while being ushered down the hall away from Paul.

In the end, it was a small part of the hype and internet video circus around the whole week.

And, as Paul could be heard shouting back at Fury at the end of the video, Fury didn’t look spectacular himself in his own bout to up his leverage for a proposed fight.

Still, there is obviously something in play from longtime British promoter Frank Warren, who successfully got Fury and one of his top British Heavyweights, Daniel Dubois, on the Paul-Woodley card. By contrast, Dubois destroyed his American opponent in two minutes.

Now, we’ll see if the Youtuber has any interest in fighting the much more experienced Fury, next or whether he will “slow-play” that bout or any other one, where he has a chance to get hit by a legitimate boxer and worse, get beaten?