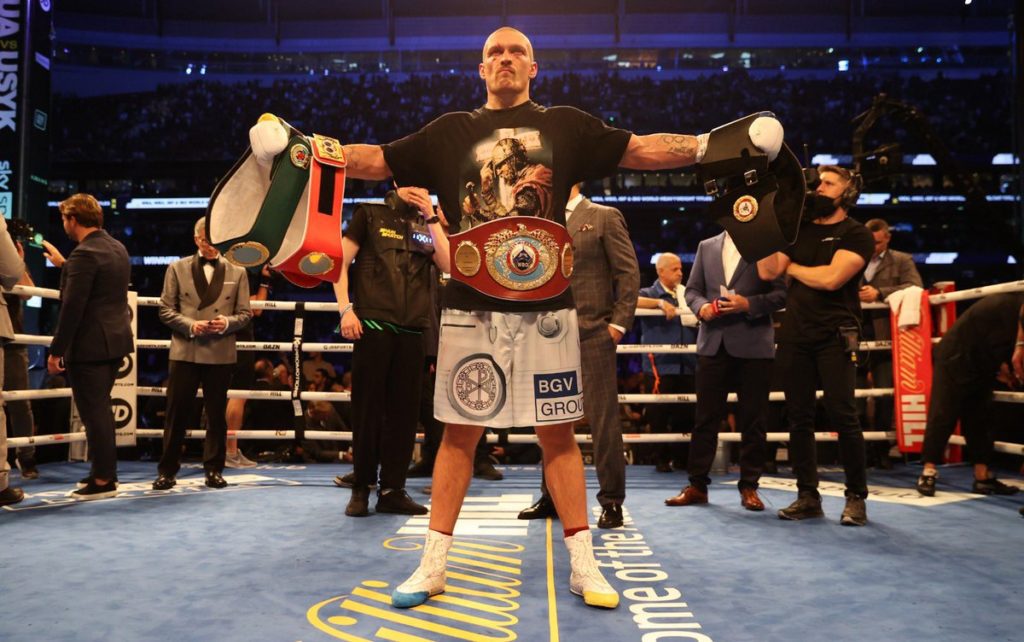 Earlier on Saturday morning in Ukraine, Unified Heavyweight champ Oleksandr Usyk took to social media in a direct plea to Russian President Vladimir Putin and his forces to withdraw from the southern neighboring country.

Usyk took to Instagram for approximately a minute with what appears to sound like gunfire going on in the distant background where he was,

Good morning to everybody. My name is Aleksandr Usyk. I’d like to speak to the people of Russia. If we consider ourselves as brothers, orthodox ones. Do not let your children to set out to our country, do not fight with us,” the unbeaten Ukrainian sports hero said.

“Also I’m addressing this to the President Vladimir Putin. You can stop this war. Please just sit down and negotiate it with us without claims. Our kids, wives, grannies are hiding in the basements… We are here in our own country, we cannot do it other way – we are defending… Stop it! Stop this war.”

Friday night was the third consecutive one of ground fighting throughout the country of over 40 million residents, including Russian forces on the ground, in tanks, etc. in and around the capital of Kiev. There continues to be outrage and economic sanctions from the U.S. and its European allies over Putin’s invasion of Ukraine, which had been threatened for weeks.

Hear us discussing the situation in Ukraine and how it might ultimately affect and delay Usyk’s proposed rematch with Britain’s Anthony Joshua on the “Big Fight Weekend” podcast guest with “The Boxing Writer,” David Payne by clicking below,

The Usyk-Joshua rematch of the Ukranian’s 12 round decision win last September has been rumored for May or early June at a location yet to be determined.

Usyk is 19-0, 13 KOs, as a professional and is the former Undisputed World Cruiserweight champ, as well. The Ukranian southpaw is also a national hero for having won the Gold Medal in the Heavyweight division at the 2012 London Summer Olympics.

It continues to be day by day on the latest with the Russian invasion and whether, as Usyk said in his plea, they will eventually withdraw.