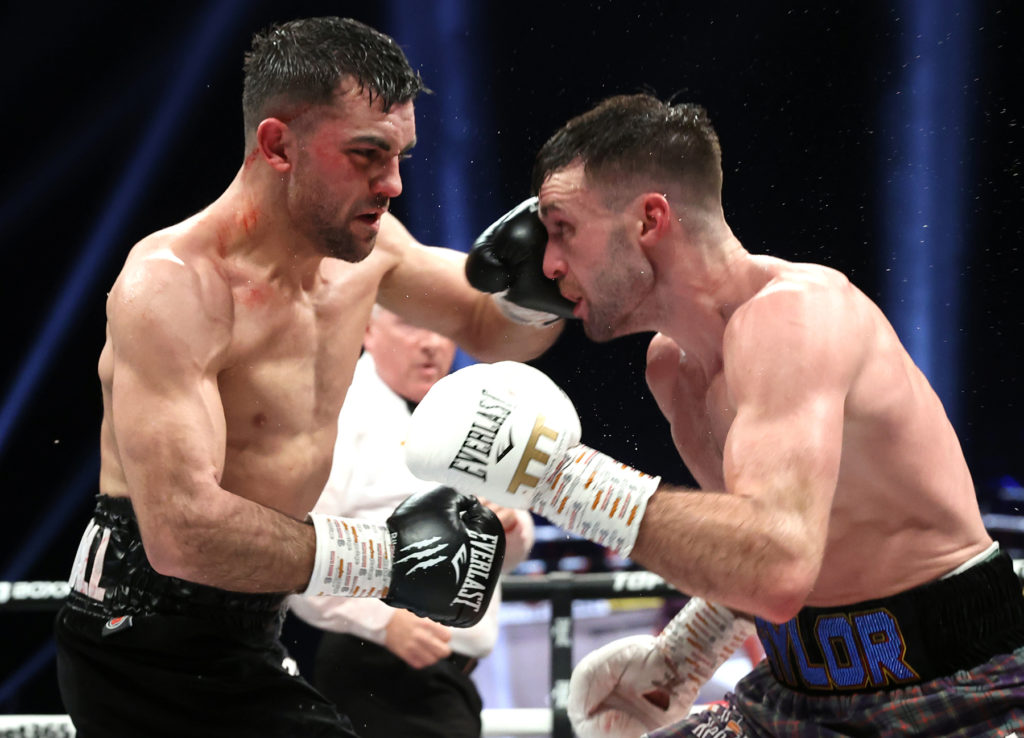 Scottish Undisputed Junior Welterweight champion Josh Taylor returned to his homeland and got more than he bargained for in a wild split-decision win in his first defense of all the belts Saturday night.

Taylor needed every ounce of guts and scoring to come up with the narrow victory over previously unbeaten English Challenger Jack Catterall by scores of 113-112 on two cards with the third judge scoring it 114-111 for the challenger,

Despite facing a raucous home crowd of over 14,000 fans behind Taylor, Catterall controlled the fight throughout and scored the only knocked out of the bout. That came with two hard overhand lefts that dropped Taylor onto all fours in the eighth round stunning the crowd.

However, Taylor wasn’t seriously hurt and continued to press forward in the final rounds trying to land his straight lefts out of the southpaw stance.

A critical moment came later in the 10th round when referee Marcus McDonnell, who spent most of the fight interjecting himself and warning the fighters, finally took a point away from Catterall for holding and hitting the champ. And, obviously, that point would end up being huge for the ultimate outcome.

In a bizarre moment, the ref later took a point away from Taylor at the end of the 11th round for throwing a jab punch just after the bell at Catterall’s midsection. That deduction made the final decision more dramatic.

Taylor, now 19-0, 13 KOs, got the nod despite being out-landed by Catterall 120-73 in total punches in the fight. That means the champion got the decision, while being knocked down, and while only landing on average 6 punches a round. Catterall also cut the champion on the outside of the right eye and eventually, Taylor suffered a significant gash under the right eye as well.

Big Fight Weekend had the card 114-111 or 7 rounds to 5 for the challenger with the knockdown and each fighter being deducted a point.

“He was trying to spoil a lot. Pull me down (holding) a lot. He caught me with a couple of good shots. It wasn’t my best performance. I put a lot of pressure on myself,” Taylor told Sky Sports in the ring.

Taylor was coming off his Undisputed win over Jose Ramirez of California by decision last May in Las Vegas.

Catterall had been 26-0, but had not fought the same caliber of competition as the four belt champ had over the last three years. Still, many believe that he was the better fighter and deserved the decision Saturday night.