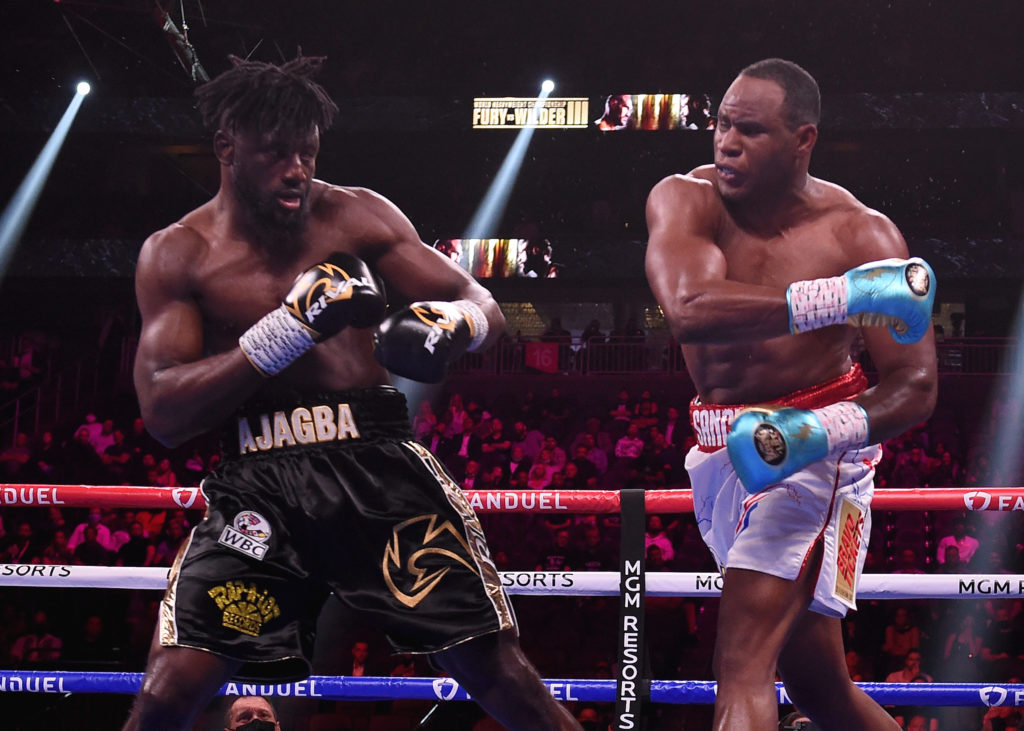 Efe Ajagba and Frank Sanchez was the co-main event Saturday night, and they quietly boxing to an uneventful ten-round decision won by Sanchez to remain undefeated.

The judge’s scorecards were 97-92, 98-91 x 2, all in favor of Sanchez, who made the impression of doing a little more than Ajagba in this one.

This was the co-main event leading into Deontay Wilder taking on Tyson Fury for the third time.

It was a tactical matchup from the onset as the feeling-out process took a few early rounds. One thing that was certain in this one was that Ajagba had a hard time stringing punches together. Part of that may have been that fact that both weren’t doing much at all. As the 5 round started, Sanchez landed less than 50 punches. By the end of the fifth round, the boo birds were out for this one as both weren’t letting their hands go enough to satisfy anyone with eyes watching.

Frank Sanchez scores the first knockdown of the fight, tagging Efe Ajagba with two right hands, and following it with a left while his opponent had a knee down. #AjagbaSanchez

At the arena after the end of the fifth round, you could he a pin drop, as the arena music volume seemed to get a little louder than usual. What was going on in the ring was more of the same as Sanchez had an advantage in footwork and made Ajagba pretty one-dimensional and unable to get anything going.

Some poor referee work in the seventh as Efe Ajagba was hit clearly by Sanchez while on a knee, but referee Mark Ortega missed the call, which generally would be a disqualification. Instead, it was ruled a knockdown, and the fight pressed on and what transpired was more of the same nothing burger from the opening bell. Shocked that they didn’t use replay for it as that is a practice that is an option in the state of Nevada.

The biggest takeaway going into this fight was to see which one of this undefeated heavyweight was ready for the next step up. After sitting thru what felt like the worst action fight of the entire card, they both have a long way to go. Tonight, however, Sanchez was a notch better.