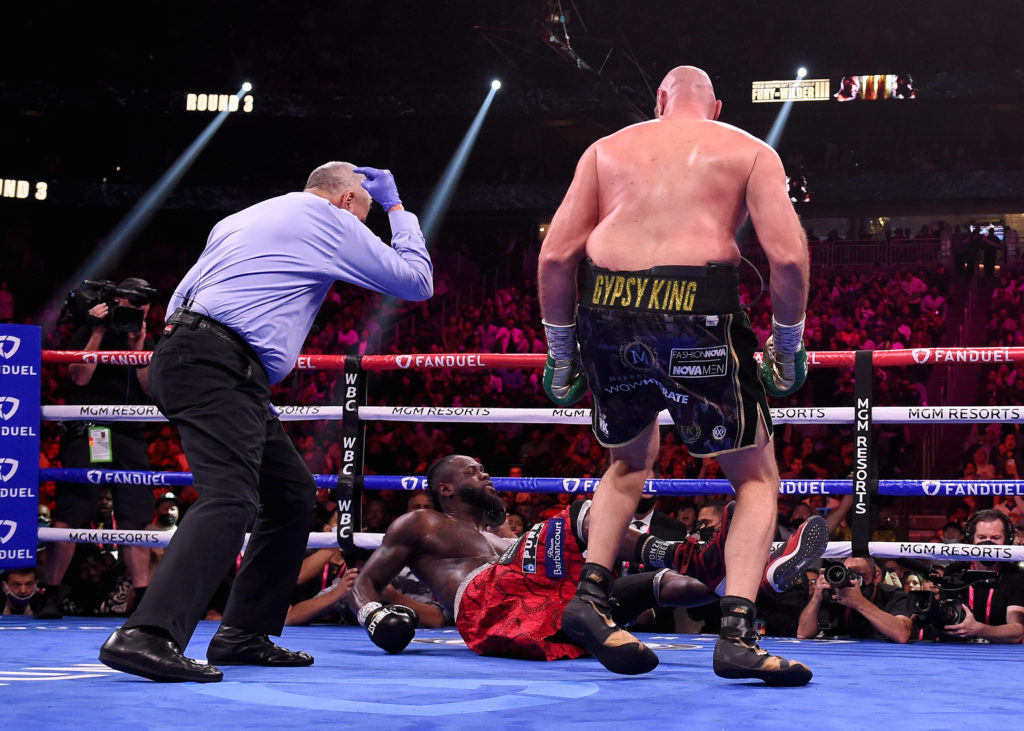 Tyson Fury and Deontay Wilder created bedlam Saturday night as both slugged it out for eleven rounds for the WBC Heavyweight title with Fury retaining by stoppage.

The main event bout from the T-Mobile Arena in Las Vegas for Fury’s version of the heavyweight title was the third and final contest between these two, and once the bell rang, you could see that Wilder was making a conscious effort to go the vast body of Fury. It was well known that both came in heavier than last time out (Fury 277, Wilder 238). First-round was a feeling out round nonetheless.

The second round of this bout showed that both are still trying to look to capitalize. One thing for sure was that the crowd was all into this one, and it made a world of difference from the previous bout as Efe Ajagba and Frank Sanchez bought.

Don’t ever doubt me, when the chips are down I always deliver!

In the third round, Wilder was knocked down with a flush right, and at this point of the fight, Wilder looked out for the night. He survived the last 15 seconds of the round but wasn’t looking good at all. By the start of the fourth, this looked to be the final round of this one as Wilder didn’t have his legs under him at all, and you could sense it in the arena.

That was until Wilder caught with a right that had Fury doing the “Stanky leg” before crashing to the canvas. Fury was knockdown again as the round ended by Wilder but could respond to referee Russell Mora’s instructions. It was an unreal turn of events giving the way the fight was going at the time.

When the start of the sixth round, you can see the bombs just flying as both seemed to be headhunting to send the almost sell-out of 15,820 home. What transpired was a few back and forth exchanges between two fatigued fighters. Fury, despite what was happening, was able to use his jab to keep Wilder in check.

The way the action was going, this felt like the next knockdown of this fight would be the last of it, and Fury was slipping a lot of punches by Wilder, who looked to be fading as well. Ringside doctor warned Wilder at the start of the ninth round as he was insisted on the fight continuing despite looking worse for wear. It helped as it was another solid round for Wilder despite looking like both are still standing on pure adrenaline and will. Wilder was caught again in the tenth round with a left that sent him down again in the fight.

The eleventh round was the last for this one as a spent Wilder ran into a right on the ropes by Fury and was sent down, signaling the end of the fight. Was a solid delayed moment as the ringside doctors were checking on Wilder while Fury celebrated.