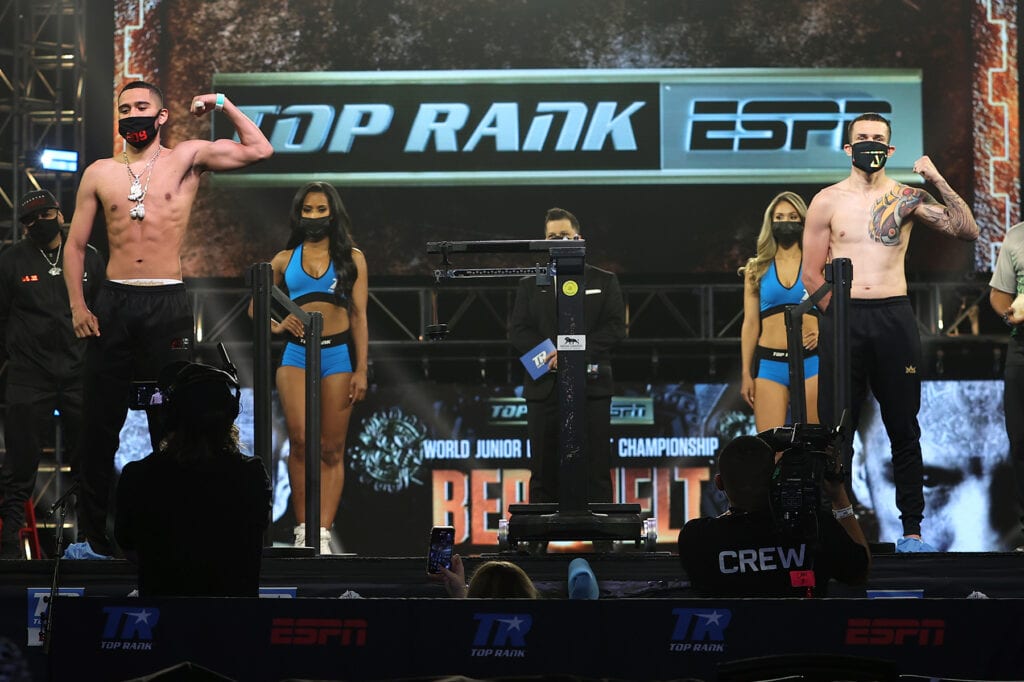 Gabriel Flores Jr. made a big statement Saturday night stopping Jayson Velez in six rounds to remain undefeated as he kicked off the main broadcast card from inside “The Bubble” of the MGM Grand in Las Vegas.

Flores (20-0, 7 KOs) was making his second return back to “The Bubble” and made noise with it as Velez for him was a huge step-up fight in the competition. None of that seemed to matter as Flores made it look easy in this one against Velez, who was last seen in action almost going the distance against Oscar Valdez.

“Being patient and making sure to land the right shot,” Flores said after the victory.

Flores did just that in the sixth round as he landed a right that wobbled and sent Velez down in the sixth, Velez got back up but Flores came in and closed it out as he sent Velez down again signaling the stoppage of the fight. Before that stoppage, he was in complete control as he kept Velez off balance throw the whole fight.

🗣 "WHO RUN IT?!?!" 👑@G_Squad_Nation aimed to make a statement on the big stage, and the rising star Junior Lightweight did just that. 😱#BercheltValdez | LIVE NOW on ESPN & ESPN+ pic.twitter.com/CGXpLlW3h1

I sent a statement that I’m ready for a world title.”” Flores said after the fight when asked what he wants next in the ring.

“I hit him, and he didn’t see the punch coming. That’s why he was so hurt.”

“I could’ve done it earlier. I was playing with my food. {Trainer Gabriel Flores Sr.} told me I just gotta press it. Nothing was really going on those first five rounds, to be honest. I was just feeling him out.

Flores said after the fight that he was looking forward to the winner of Jamel Herring-Carl Frampton, which will take place in March. That line for the WBO belt is going to be loaded and long one at 130 so we’ll see how that slot Flores as he moves up the ranks but he looked good in this one to kick off the ESPN broadcast.