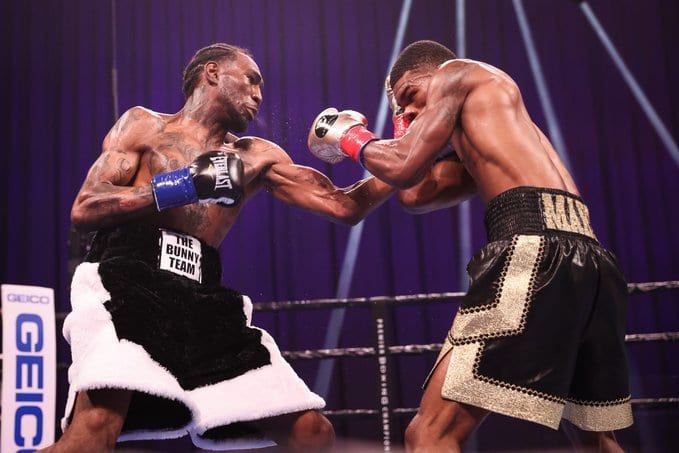 Robert Easter Jr. made his second crack at junior welterweight and made it a solid effort for him as he outboxed Ryan Martin to kick off the Showtime broadcast airing from “The Fightsphere” from the Mohegan Sun Casino.

The biggest challenge that Easter told us on the Big Fight Weekend podcast was staying focus, but that wasn’t the problem once the bell rang. Easter from the opening of this contest was establishing the jab against Martin, a riding theme for the fight.

These two had met in 2011 back in the Olympic qualifiers, and Easter won that contest also. Not only was Easter more active, but he was also just outboxing Martin for the first half of the fight.

Martin’s corner was frustrated in his effort throughout the fight. SO much so that after the end of the seventh round told him that “He was doing nothing in the ring” to try to jumpstart a ring adjustment. That led to perhaps his best effort in the fight and also a clash of heads that caused a cut on Easter in the later rounds.

The championship rounds were more of the same as Martin wasn’t able to cut the ring off and pretty much let Easter use his footwork to keep his distance away from Martin, which led to what was seemingly an effortless victory. With the win, Easter moves to 23-1-1 with 14 Kos and has been undefeated in two bouts since moving up to 140 pounds.

After the layoff during this pandemic, great win for him, which kept him out of the ring in 2020. We’ll see who they have for him in a crowded field for the former IBF lightweight champ.

This fight was in the leadoff spot leading to the conclusion with Adrien Broner taking on Jovanie Santiago.