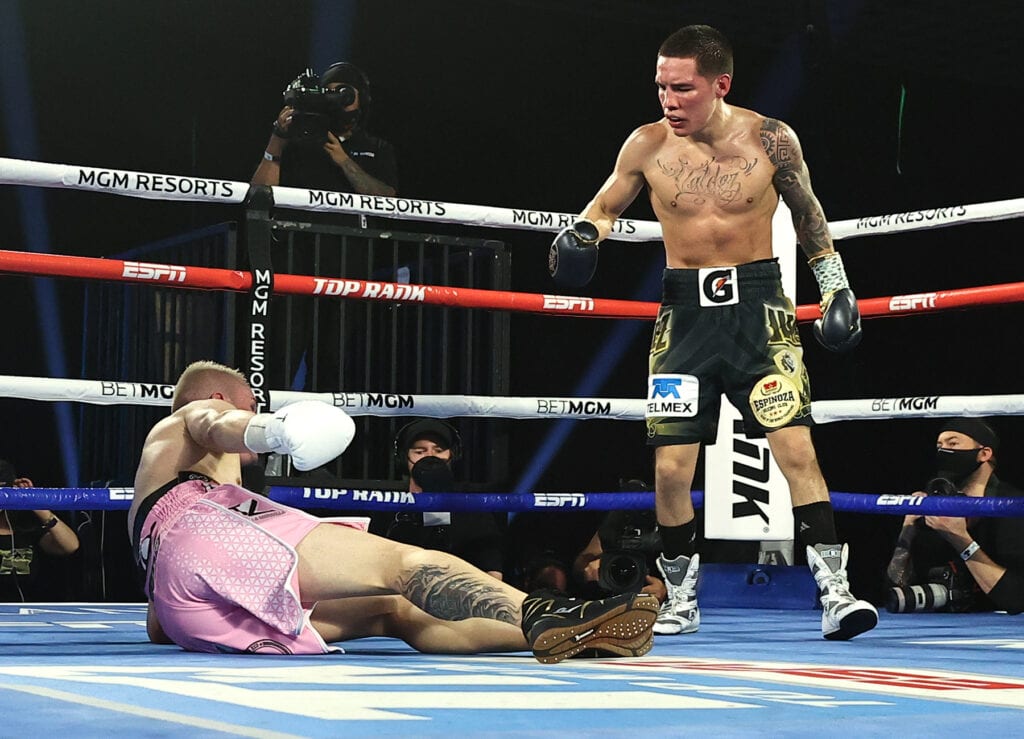 Jayson Velez and Oscar Valdez closed down what will be the first leg of Top Rank Boxing from inside The MGM “Bubble” Tuesday night. The main event that aired on ESPN ended with a tenth round stoppage win by Valdez.

2:23 of the final round was the official time of the TKO victory for Valdez.

Early on in the fight, Velez (29-7-1, 21 KOs) looked to be the aggressor despite the fact that Valdez (28-0, 22 KOs) was landing more. Made for an interesting fight to score round wise as Valdez didn’t look sharp going in. So much so, that during the first half of the fight broadcast analyst Tim Bradley was vocal about not liking what he was seeing from him. Bradley continued after him until…

A left hook in the closing moments of the fifth round changed all of that in the fight for Valdez, sending Velez down. From that point on, Velez looked worse for wear as he then tried challenging Valdez on the inside. That was a complete 180 from what he was doing before the knockdown.

The latter end of the fight showed that despite the knockdown in the fifth, Velez wasn’t going away easily and seemed to get back on track with his fight in the seventh and eighth rounds. The start of the ninth round began with a point deduction to Velez for a low blow by referee Tomy Weeks.

Seemed like a quick hook for a point for Velez in a fight that appeared close. And, any hopes of a comeback by Velez looked bleak as Valdez rocked him late to close that round. Valdez sealed it, once again, with the another left hook knockdown with a minute left in the contest.

A quick second knockdown in the round seconds later forced Weeks to finally end this. For Velez, this was his first-ever stoppage defeat.

Valdez got the victory which will sooner or later get us to the matchup between Miguel Berchelt that has been the goal for those two for quite some time.  Valdez was the underdog going into that fight and nothing tonight would change most boxing viewer’s opinion on that after this.