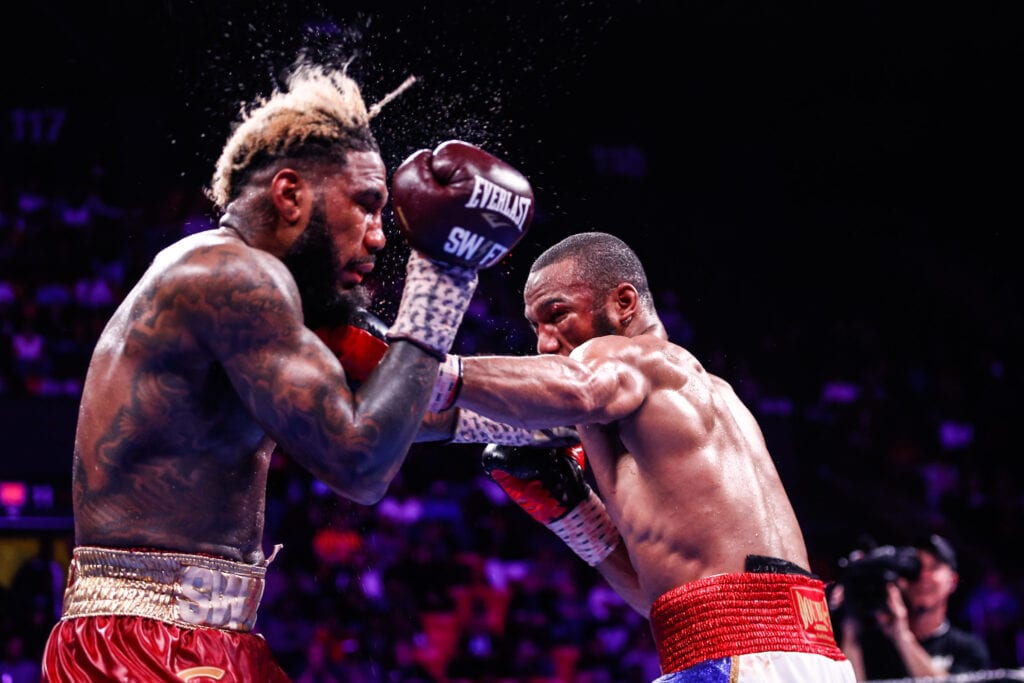 So far in 2019, we have some fantastic fights go down, and while we still have some blockbusters and mega fights coming down the line, I wanted to take a quick look back and highlight some of the matches that I’ve liked so far this year.

This contest is right now the front runner for Fight of the Year by every boxing media outlet and fan, and it is for a good reason. Williams came into this fight as an underdog with it taking place in Hurd’s backyard. Hurd himself had the Washington Redskins marching band play him into the ring. Once the music stopped, and the bell rang, however, Williams was able to become the aggressor and control the fight. Hurd as champ wasn’t going down without a fight and what happened in the ring was a throwback slugfest over 12 rounds. One that would show Hurd battered and Williams required to have surgery on his elbow afterward. Williams would come out victorious and the new WBA and IBF light middleweight champion. If you haven’t seen this one, check this one out as you will not be disappointed.

A lot of people stateside have not taken a gander at this so let me set this one up for you because this scrap is a doozy.

Polish Middleweights Patryk Szymanski and Robert Talarek squared off back in April with Talarek coming in with a record of 23-13-2 while Szymanski was 19-1. On paper, this stacks up as the usual rebound fight where the “fight veteran” would go against the young upstart fresh off his first defeat. The first round even played out as such with Talarek going down not once but twice in the first round. Seemed to be all wrapped for Szymanski, right?.

What happened from there would be eight more knockdowns to total ten total over a five-round contest scheduled for eight. That is not a typo, these two played rock ’em, sock ’em robots in real life in what is one of the craziest slugfests I’ve seen in a while. Talarek would become the victor after the ten and final knockdown after landing a vicious right to Szymanski causing the ref to stop the bout in the fifth round.  Szymanski would announce his retirement right after this session of punishment.

The video below is in Polish, so if you don’t speak it, you’ll learn quickly what a knockdown sounds like by the commentary in what was such a wild affair.

This battle would be the last one for the former champion Lamont Peterson, and he decided to go out with a bang standing toe to toe against Sergey Lipinets.  It also was terrific as throughout ten rounds scheduled for twelve how both were going at it trading blows to one another. As the contest wore on you can tell that Peterson was getting the worst of these exchanges and was finally stopped by Lipniets in the tenth with a right that sent him down and his corner throwing in the towel shortly after. While Peterson would announce the end of his boxing career after this one, he went out in fashion and definitely in a good one to watch back.

– Angel Acosta vs. Elwin Soto.  Did I like the like the ref stoppage to close out this one? I’ll stand by it seemed a little early, but I think there was more outrage by everyone watching the fight than from Acosta who was in it against Soto who was behind on everyone’s card in a dogfight until the final round.

–Anthony Joshua vs. Andy Ruiz Jr. Now before you write my list off because I have the biggest upset in recent memory down here and not in the Top 3, I’ll remind you that for the first two rounds and the fifth and sixth were some pretty ho-hum boxing. That seventh-round however where Ruiz stopped Joshua causing chaos in boxing is going to win Round of the Year by most boxing fans and pundits without a blink of an eyelash.

This is my list of the best fights of 2019 so far. There have been hundreds, let me know which ones I’ve missed!