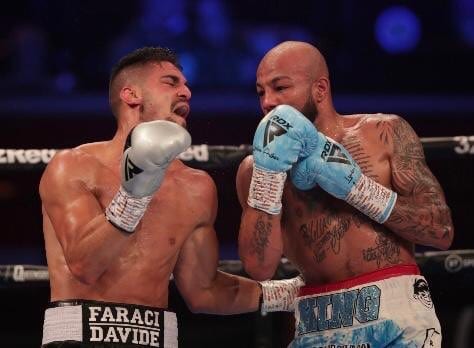 Unbeaten British Light Heavyweight contender Lyndon Arthur was hoping for an impressive showing Saturday night in London and while it took a while, he eventually delivered. Arthur scored two knockdowns and got a TKO stoppage with 10 seconds remaining in the ninth round to defeat Italian, Davide Faraci.

The bout was the main event of the Queensberry Promotions show from legendary Royal Albert Hall in London in front of nearly 4,000 fans.

That was some finish from @LyndonArthur 💥

He found the answer against Davide Faraci. King Arthur delivers on his promise to make it 1-0 England 🙌 #ArthurFaraci pic.twitter.com/KWWZt6ydYU

Arthur, now 19-0, 13 KOs was in action for the first time since his December split-decision win over fellow English contender Anthony Yarde. And although the Manchester native started fast scoring with good straight right hands, Faraci took his punches early and Arthur seemed to tire somewhat, as the fight wore on.

This was especially in the seventh round, when Faraci, now 15-1, caught him with a couple of right hands of his own and Arthur was bleeding from his nose. At that point, there was some debate about whether there would be a dramatic finish from the Italian at the end?

However, the ninth round saw the 30 year old Arthur catch Faraci with a straight right hand flush on the chin dropping him on the seat of his pants. Faraci rose wearily the count of 6 and Arthur quickly moved in for the finish. He scored a solid left uppercut followed by a right cross that had Faraci down again almost going through the lower strands of ropes.

The Italian just beat the count and referee Marty McDonald allowed the fight to continue. However, Arthur finished things with another solid, straight right that staggered Faraci with just seconds remaining in the round.

The win puts Arthur in possible position for a title shot with WBO 175 lb. titleholder Joe Smith Jr. of the United States. Smith is apparently in talks for Unification fight with WBC – IBF champ Artur Beterbiev of Russia for later this year..

Instead of fighting Arthur though, Smith may also opt to fight fellow American Daniel Jacobs later this year, who would move up to Light hHeavyweight for the first time to fight him.

It may be that Arthur ends up fighting Yarde, again, who was also supposed to be on the Queensberry Promotions undercard Saturday night until his opponent was injured early this week and could not fight.