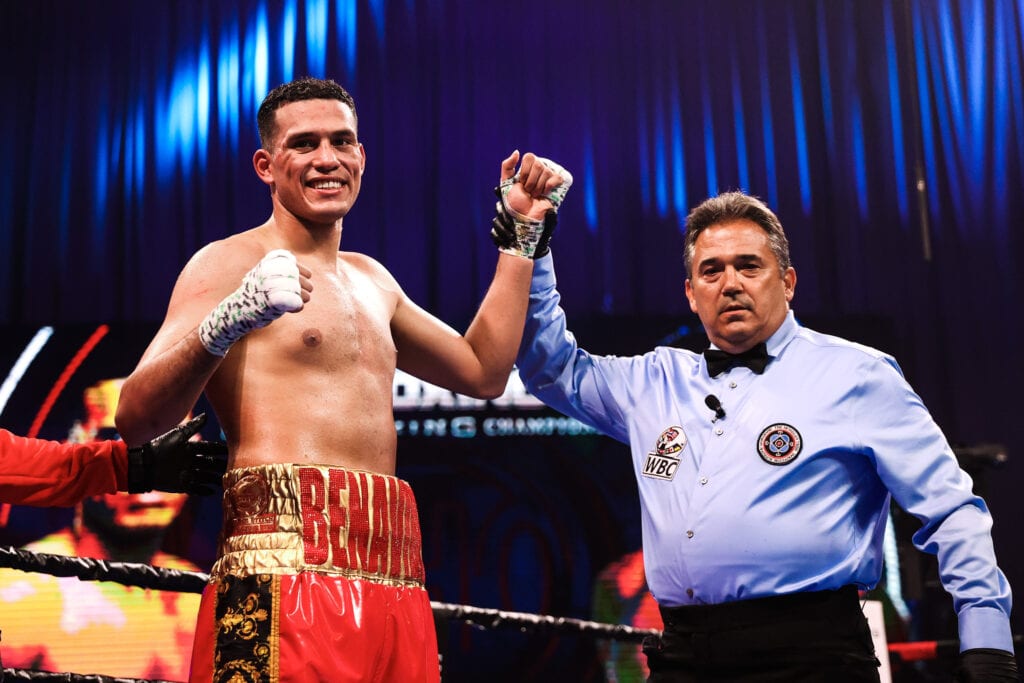 The SHOWTIME CHAMPIONSHIP BOXING® telecast also features two under-25 lightweight contenders Isaac Cruz and Matías Romero in a 12-round co-main event bout. A 10-round super welterweight affair between Terrell Gausha and Jamontay Clark will open the telecast on SHOWTIME. The event is promoted by TGB Promotions and Sampson Boxing.

“The super middleweight division has quickly become red hot with so much talent bubbling to the top. David Benavídez is one of the most talented boxers at 168 pounds, which is proven by the fact that he’s an undefeated two-time 168-pound world champion,” said Tom Brown, President of TGB Promotions. “Benavídez is fighting to reclaim his world championship and Ronald Ellis is fighting to claim his spot among the elite at 168 pounds. With that kind of motivation on both sides, this promises to be an explosive match. Isaac Cruz and Matías Romero are fighting to get to the top of the lightweight division and Terrell Gausha and Jamontay Clark are fighting to remain at the top of the super welterweight division. The entire show has intrigue that ripples through some of the best divisions in the sport.”

“On March 13, David Benavídez will move another step closer to regaining his beloved green and gold belt and remind the world he is the best super middleweight in all of boxing,” said Sampson Lewkowicz of Sampson Boxing. “There will be no doubt in anyone’s mind after another spectacular performance by David ‘El Bandera Roja’ Benavídez.”

David Benavídez (23-0, 20 KOs), a boxing prodigy from Phoenix, Arizona, returns to the ring following a stoppage victory over Alexis Angulo at the “Fight Sphere” at Mohegan Sun last August. Benavídez turned pro at 16 and captured his first world title at age 20, becoming the youngest 168-pound world champion in history. An undefeated two-time super middleweight champion, Benavídez looks to earn another title opportunity at super middleweight. He was stripped of his WBC crown due to missing weight against Roamer Angulo. With nine of his 20 knockouts coming in the first round, the 24-year-old possesses one of the most devastating arsenals in all of boxing. It was on full display when he captured the super middleweight title for the second time via ninth-round TKO over fellow two-time champion Anthony Dirrell.

“I’ve had an amazing camp in Big Bear and this is the strongest I have ever felt so I’m looking to get an early stoppage against Ellis,” said Benavidez. “I’m glad this is a title eliminator and it’s going to be another step to being a world champion once again.”

The 31-year-old Ellis (18-1-2, 12 KOs) has been calling for the biggest fights at 160 and 168 pounds, and he has landed the toughest challenge of his professional career against Benavidez. Ellis, a native of Lynn, Mass., is fresh off a win over three-time world title challenger Matt Korobov who was forced to retire due to an injury during their December fight on SHOWTIME. Ellis has exhibited his slick boxing ability in recent outings but also possesses ferocious power, as evidenced by eight first round knockout victories in his career.

“It’s a fight but not just any fight,” said Ellis. “This is the type of fight I have trained for and wanted since I turned pro. He’s going to bring his best on March 13 and that will bring out the best in me.”

Cruz (20-1-1, 15 KOs) returns to the ring following the most impressive performance of his career – an emphatic first-round knockout against former world title challenger Diego Magdaleno in October. Fighting out of his hometown of Mexico City, the 22-year-old is quickly climbing the ladder in the lightweight division in pursuit of a world title. Cruz turned pro in 2015 at the age of 16 and suffered his lone defeat a year later, but his aggressive ring generalship has kept him unbeaten over the past five years.

“I’m very excited to be fighting on SHOWTIME on March 13,” said Cruz. “The lightweight division is the hottest in boxing right now. This fight puts me one step closer to my dream of winning a world title for my Dad, Isaac Cruz, Sr. and my country, Mexico.”

Romero (24-0, 8 KOs) will put his perfect record on the line as he attempts to rise from prospect to contender with a win over Cruz. In his most recent fight this past November, Romero of Cordoba, Argentina defeated Javier José Clavero via unanimous decision in a fight at 130 pounds. The 24-year-old Romero’s most recent knockout came in March 2020 over Gabriel Gustavo Ovejero when he scored a fifth-round TKO in his last fight at lightweight. This fight will mark Romero’s U.S. debut and first appearance on SHOWTIME and Premier Boxing Champions.

“I’ve come so far from Argentina to bring myself one step closer to reaching my goal of being a world champion,” said Romero. “I know that Isaac Cruz is a big puncher but he’s never fought anyone with my speed and heart.”

A decorated amateur who represented the United States at the 2012 London Games, Gausha (21-2-1, 10 KOs) continues his quest to win a world title. Following a sensational first-round knockout against Joey Hernández in 2018, Gausha fought former world champion Austin Trout to a split draw and lost a decision against world title challenger Erickson Lubin in back-to-back bouts. Born and raised in Cleveland, Ohio, the 33-year-old now lives and trains out of Encino, Calif., under the tutelage of accomplished trainer Manny Robles.

“I’m just blessed to be able to do what I love to do,” said Gausha. “I’m excited to be back on PBC and SHOWTIME thanks to Al Haymon. On March 13, I’m ready to go out there and show everybody what Terrell Gausha is made of and put on a show.”

Clark (15-1-1, 7 KOs) comes into this fight off a unanimous decision victory against Anthony Lenk last February. Fighting out of his hometown of Cincinnati, Ohio, the 26-year-old has only lost one professional fight, which came against former unified super welterweight champion Jeison Rosario in 2018. This will mark the southpaw’s first fight during the COVID-19 pandemic.

“It’s been a while since I was in the ring and I’m just excited to be back taking on someone like Terrell Gausha, who will bring a good challenge and let me display all of my talents,” Clark said. “This is the first step in getting back to regular action and I’m not going to waste this opportunity. I’m going on a big run after I beat Gausha. As McFadden and Whitehead said, ‘Ain’t No Stoppin’ Us Now.’”