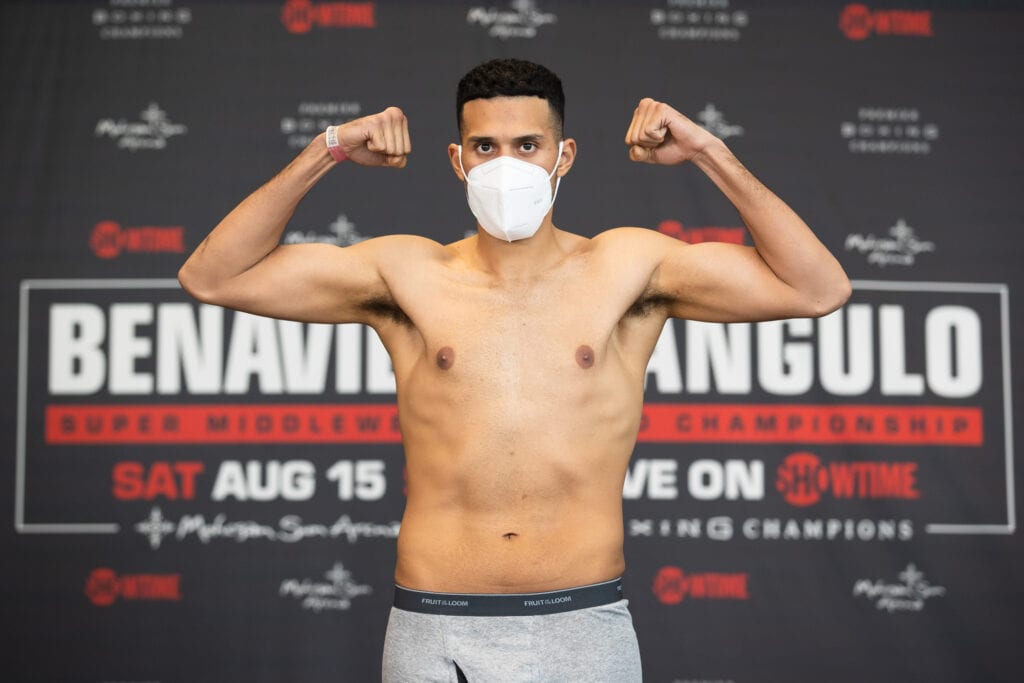 Out of the ring issues have once again cost WBC Super Middleweight champion David Benavidez his title. This as the unbeaten 168 lb. champion has been stripped of his title for a second time after failing Friday to make weight prior to his scheduled Saturday night title defense with Roamer Angulo.

Benavidez (22-0, 19 KOs) stepped on the scales at the Mohegan Sun Casino in Connecticut in advance of his scheduled 12-round title defense late morning and was 2.8 lb. overweight. He then told Premier Boxing Champions,  Connecticut officials, as well as, the Mohegan Tribe Department of Regulation, that even though they were willing to give him a couple of hours to try to shed the extra nearly 3 lb., he had no hope of making the limit.

Benavidez gave his first comments about the weight issue on the “Morning Combat” podcast/show from Showtime and CBSsports.com.

David Benavidez checks in with @lthomasnews and @BCampbellCBS after stepping off the scale. #BenavidezAngulo tomorrow 9PM ET/6PM PT on Showtime. pic.twitter.com/k7gVSAU33l

“I put the blame on myself,” Benavidez said. “You know, just the last three pounds wouldn’t come off. Maybe, you know, not having the proper things I needed – maybe a sauna. I was only able to go to the gym for an hour a day here, you know, since I’ve got here. You know, it’s a just a couple different things.

But, you know, obviously I’m very disappointed [with] the stuff that’s happening right now. But I’ve still got a job to do tomorrow. You know, I’m definitely getting another opportunity later, in the future, but I’ve still got a fight to win.”

Benavidez also made reference to the fact that he arrived earlier this week from where he’s been training in Seattle, WA, spent time in isolation, and has had no sauna, etc. to help him shed anymore weight this week.

Angulo made the weight at 167.5 lb and is now in the unusual position to potentially captured the WBC championship with a victory, even though Benavidez would be stripped of the title, no matter if he wins.

Further, Benavidez has to compensate Angulo for being overweight per the agreement and it’s believed that that was at least a six figure payment.

Benavidez was last in action in September, when he stopped Anthony Dirrell in the 9th round to regain his WBC 168 lb. belt in Los Angeles on the undercard of Errol Spence’s victory over Shawn Porter. The fight was stopped in large part due to a nasty gash that Benavidez opened over Dirrel’s eye in the sixth and continued to score at will from then on.

Benavidez regained his WBC title that night after previously having lost it due to testing positive for cocaine in a voluntary anti-doping agency (VADA) pre-fight drug test in August of 2018.

He was subsequently stripped and suspended by the WBC for four months.

As for the Colombian-born Angulo, he challenged Super Middleweight champion Gilberto Ramirez unsuccessfully in 2018 for his only pro loss (26-1). He was last in action in a split decision win in January.

PBC was hoping for a Benavidez victory and then to potentially have him fight IBF Super Middleweight Champ, Caleb Plant, late this year or early in 2021.