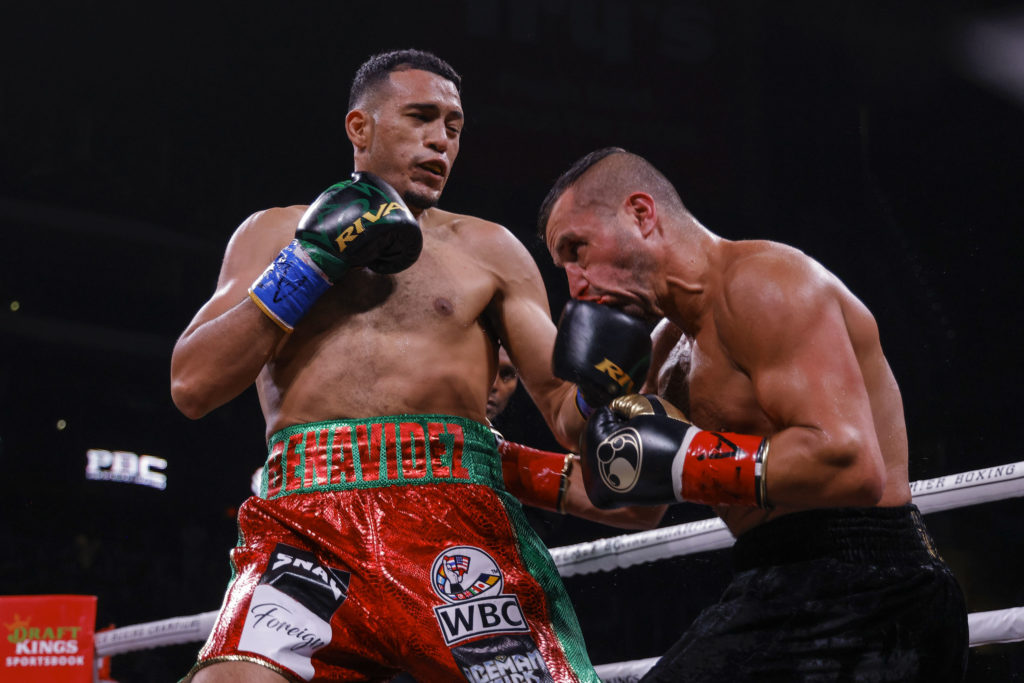 David Benavidez was expected to make a statement in the Showtime/PBC Saturday main event in Glendale, AZ and boy, did he deliver with an emphatic third round TKO win over veteran David Lemieux.

Fighting in front of a raucous crowd at the Gila River Arena, Benavidez swarmed Lemieux from the beginning and Lemieux’s corner had seen enough of him pummeling their fighter and threw the towel in to stop things.

Benavidez, who improved to 26-0, 23 KOs, was the bigger, harder punching fighter from the outset. This, as he jumped all over the former IBF middleweight world champ in the first with left hooks and left uppercuts.

Too big. Too strong. Too good. @Benavidez300 earned the TKO win after Lemieux's corner stopped the fight in round 3. #BenavidezLemieux pic.twitter.com/IRg9Nqmj48

Lemieux was staggered and his nose was already bleeding just over halfway through the first round. And, veteran referee Harvey Dock was looking closely at stopping things. He allowed the fight to go on and in the second round Benavidez scored again with a big left hand and then, a swarm of several punches that sent Lemieux into the bottom strand of the ropes and the canvas for a knockdown.

Lemieux, now 43-5, got up, but it was only a matter of time before Benavidez would finish things. A barrage of punches, including the left hook as the biggest weapon staggered Lemieux in round three with Lemieux’s corner asking for the stoppage 1:31 of the third.

“I just want to thank everyone who came out tonight. If it wasn’t for my people from Arizona, then I wouldn’t be here. It’s surreal to me. I’m going to give my heart in the ring for all of you every day,” Benavidez told Showtime in the ring post fight.

“Mike Tyson gave me the name ‘The Mexican Monster’, what do you thinl I’m gonna do? I just feel like I’m the strongest 168 pounder. No one can mess with me.

“Lemiuex is a special type of breed. This guy was swinging until the end. I had to be on my p’s and q’s. He’s a tough champion, so my hat’s off to him. He’s the only one with the guts to face me.”

The final Compubox numbers showed just how one sided things were in under eight minutes of action, as Benavidez landed a 58-24 advantage on power shots.

The win gives the 25 year old Benavidez the WBC interim super middleweight title back. Benavidez has held the interim and world title twice before, having lost it out side of the ring twice, as well. He previously tested positive for cocaine, while training to fight Anthony Dirrell which cancelled their bout. And, Benavidez was then stripped in 2018.

Then, coming off the shutdown of the sport due to Covid 19 in 2020, Benavidez came in significantly overweight for his title defense against Roamer Angulo in August of that year. Again, the WBC took the belt away, even though he won by KO over Angulo.

Still, Benavidez is undaunted and won Saturday night for the sixth straight bout by KO or stoppage. And, he clearly had made himself the top fighter for the WBC to face Canelo down the road.

If Alvarez does not, then the organization will elevate him to super middleweight world champion status.