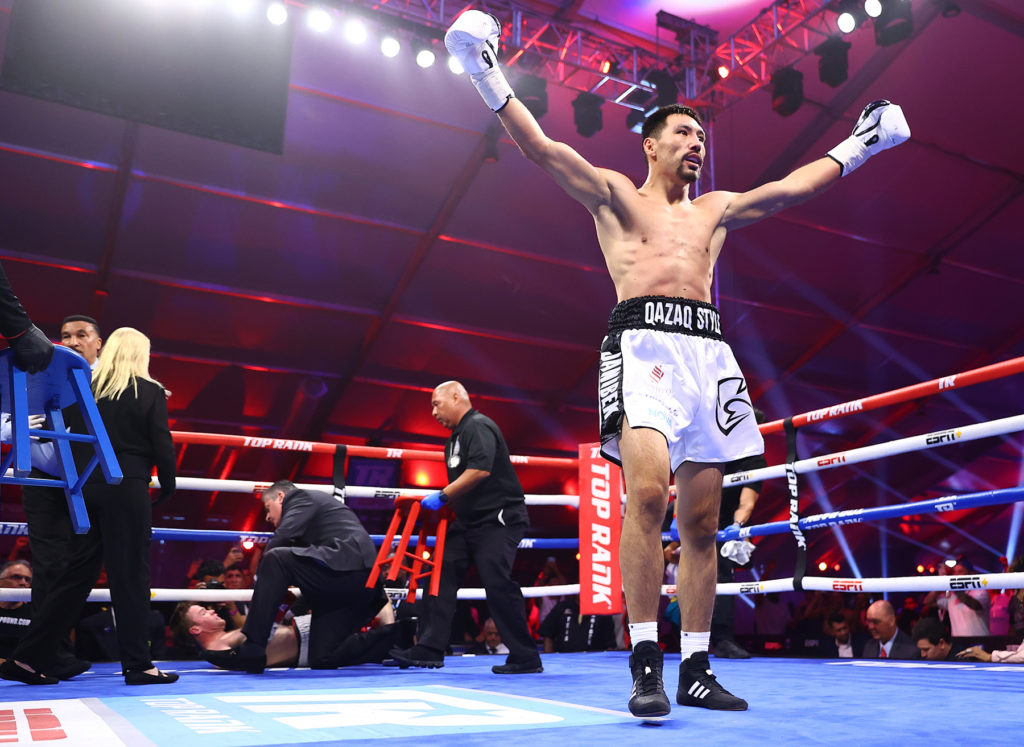 In a devastating performance, Janibek Alimkhanuly destroyed overmatched Danny Dignum in the second round to win the vacant WBO interim middleweight title on Saturday night.

Headlining a Top Rank Boxing on ESPN card for the first time, Alimkhanuly looked sensational in an absolutely dominating victory as he scored a knockout of the year candidate that left Dignum out cold at Resorts World Las Vegas

“Janibek is the next middleweight superstar,” Top Rank chairman Bob Arum proclaimed. “There is no doubt that he is the future of the division. What a sensational performance from a great young man and fighter.”

As impressive as Alimkhanuly was, he was not all that impressed with himself.

“I haven’t shown my best punches yet,” he said through interpreter Egis Klimas, his manager. “Maybe in my next fight.”

Those punches, however, were still more than enough to easily dispose of Dignum.

Alimkhanuly (12-0, 8 KOs), 28, a 2016 Olympian from Kazakhstan fighting out of Oxnard, California, started fast and never let up. He landed a left-right combination on Dignum’s chin with a minute left in the first round for a knockdown. Dignum also ate many jabs in the round that reddened his face.

In the second round, Alimkhanuly cracked fellow southpaw Dignum with a hard left hand that he managed to take, but he was so skittish about what might be coming at him after that, he bit hard on two Alimkhanuly feints that twice made him fall to the canvas.

Later in the round, Dignum (14-1-1, 8 KOs), 29, was forced the ropes and Alimkhanuly hammered him with three left hands to the head before erasing him with a clean left uppercut on the chin that dropped him hard near the edge of the mat. Dignum was out cold on his back and referee Tony Weeks immediately waved off the fight at 2 minutes, 11 seconds.

A few minutes later, Dignum, who was fighting outside of his home country of England for the first time and taking a major step up in opposition, was able to get up under his own power and seemed OK.

“I told him I wish him luck for his future,” Alimkhanuly said. “I think he’s a good fighter. He showed good skills and has a big future.”

The CompuBox punch statistics were overwhelming for Alimkhanuly as he landed 34 of 94 (36 percent) and Dignum a measly 6 of 45 (13 percent). Alimkhanuly closed the show by landing 15 of 17 power punches in the second round.

“He gets better and better each fight, each training camp, because he’s willing to learn,” said Hall of Famer Buddy McGirt, Alimkhanuly’s trainer. “When we start camp, he tells me what he wants to work on, and we do it and he puts it all together.”

The interim title was available because WBO titlist Demetrius Andrade decided to move up to super middleweight to challenge England’s Zach Parker for the organization’s interim 168-pound title. However, the fight, which was scheduled for Saturday, was canceled three weeks ago when Andrade suffered a right shoulder injury. He is expected to be sidelined for about four months.

He hopes to unify titles. He’d like to fight Andrade and also mentioned interest in WBC titlist Jermall Charlo. He also lamented that to contender Jaime Munguia declined to face him.

“Maybe Charlo will come out,” Alimkhanuly said. “I am in the ring right now, and I want to tell every champion in this weight class, I am here waiting for you. I am asking every champion to come and fight me.”

Klimas then told him, “We’ll try, we definitely will try (to make those fights).”