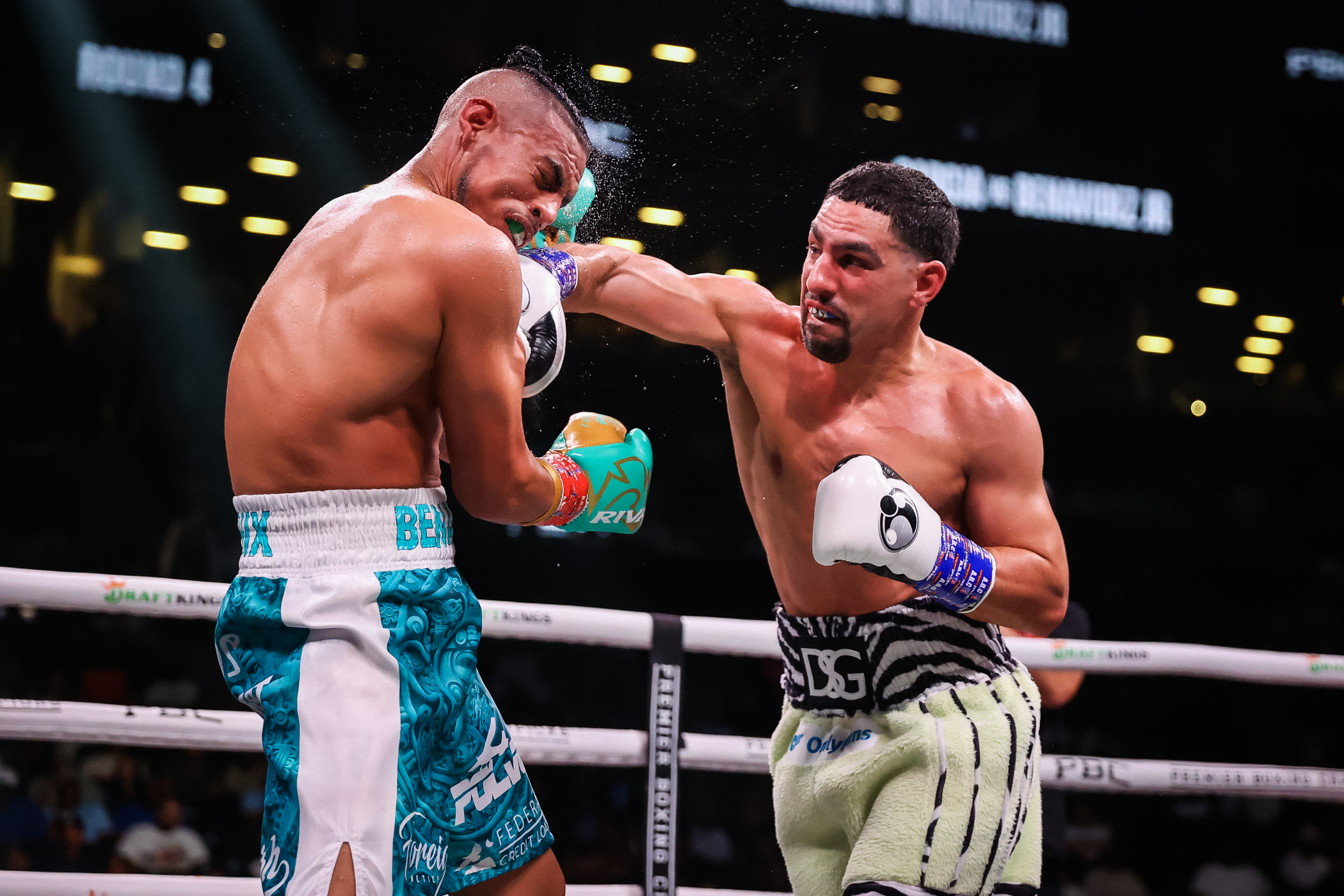 If you didn’t know Danny Garcia had been out of the ring for 19 months you wouldn’t have realized it watching his sharp performance against Jose Benavidez Jr. on Saturday night.

Making his debut at junior middleweight, former welterweight and junior welterweight world titlist Garcia more or less did as he pleased in what appeared to be a one-sided domination of Benavidez in the main event of a Showtime-televised Premier Boxing Champions tripleheader at Barclays Center in Brooklyn, New York, where Garcia improved to 9-1.

No ring rust in Brooklyn 😎@DannySwift earns the impressive m ajority decision win over Benavidez in his first fight at 154-lbs. #GarciaBenavidez pic.twitter.com/u3AJXl0jeZ

But the result did not come without a typical scoring controversy. While judge Tony Paolillo (117-111) and Glenn Feldman (116-112) had Garcia winning, Waleska Roldan stunningly had it 114-114, finding a way to give the largely inactive and ineffective Benavidez six rounds.

After the loss to Spence, Garcia took the longest break of his career to, as he said before the fight, recharge his batteries, spend time with his young family, enjoy all the money he has earned and rekindle his love for boxing.

After the fight, Garcia got emotional in the ring during his Showtime interview with Jim Gray and said he also went through some mental health issues.

“I did take a break going through mental things. Things went dark,” Garcia said, as he began to cry. “I went through anxiety, deep depression, just trying to be strong.

“It was the pressure of life, being a good dad. (I’m) just letting it out right now because it was stuck inside. It rained on me for a year and a half and the only way to do better is to fight and I’m a fighter. If you battle anxiety and depression, you can get out of it. That’s what I did today. I fought. I still battle some days. I have dark days, but I try my best to stay positive. But I feel good. I gave the fans a good fight tonight.”

He credited the support of his ever-present father and trainer, Angel Garcia, for helping him see his way through.

“He was there with me the whole way. I’m nothing without this man,” Garcia said of his father. “I thank him every day.”

Garcia, who was sharp from the outset, dominated the fight with a relentless body attack, combination punching and a steady, stiff jab while Benavidez struggled to land effectively.

Garcia (37-3, 21 KOs), 34, of Philadelphia, landed many good right hands, including a clean one that seemed to buzz Benavidez in the seventh round.

Round after round, Garcia continued to do as he pleased while Benavidez only occasionally landed anything cleanly.

Rarely, did he throw combinations. He did land a crisp right hand that got Garcia’s attention in the ninth round, which was his best of the fight and a round all three judges gave him. Other than in that round, however, Benavidez had few answers for Garcia’s steady onslaught.

Before the 12th round, Benavidez’s father and trainer, Jose Benavidez Sr., implored his son to step it up. “It’s the last round! Go for it!” But Benavidez didn’t do anything of the sort and Garcia closed him out with no difficulty in a lopsided final round during which Garcia confidently raised his right arm and encouraged the pro-Garcia crowd to cheer for him.

According to CompuBox, Garcia landed 233 of 746 punches (31 percent) — including connecting with a career-high 153 body shots — while Benavidez landed 117 of 600 punches (20 percent). Garcia also outlanded him in every round and landed double-digit punches in every round except for the first, when he connected with nine blows.

Benavidez (27-2-1, 18 KOs), 30, of Phoenix, a one-time can’t-miss prospect, whose career was derailed when he was shot in the leg in 2016, dropped to 0-2-1 in his last three fights. He suffered a one-sided 12th-round knockout loss challenging welterweight titlist Terence Crawford in October 2018. A nearly three-year layoff followed until a generous 10-round draw with journeyman Francisco Torres in a November middleweight bout.

“I’m happy with my performance. I feel like I did good,” Benavidez said. “I’m fighting in his backyard, one of the best. I took his punches like they were nothing. I thought I won the fight. But it is what it is. A loss makes you stronger.”

Garcia’s path to a title shot is blocked because undisputed champion Jermell Charlo has all four belts and is likely headed to mandatory defenses in at least his next two fights, leaving Garcia to look elsewhere for a meaningful bout.

Former junior middleweight titlist Tony Harrison was ringside and said he would like to fight Garcia next but Garcia was not so interested. He has other ideas.

“I’d like the rematch with Keith Thurman. He took my ‘0,’” Garcia said of losing his first bout to Thurman by split decision in a welterweight unification fight, also at Barclays Center, in March 2017.

If he can’t get a rematch with Thurman, he has another name in mind.

Whomever Garcia faces next, he seemed at ease back in the ring, having learned how to deal with his mental health.

“In order to be Danny Garcia again I had to be back in the ring to do what I love, to be a fighter,” Garcia said. “People ask me everyday, ‘You make good money in boxing, why do you still fight?’ I feel like I’m a fighter, this is what I do, same way Warren Buffett is 90 years old and still making money in stocks.

“I’m a fighter. So, this is what I love to do and hopefully I don’t become a meme with my crying face like Michael Jordan.”