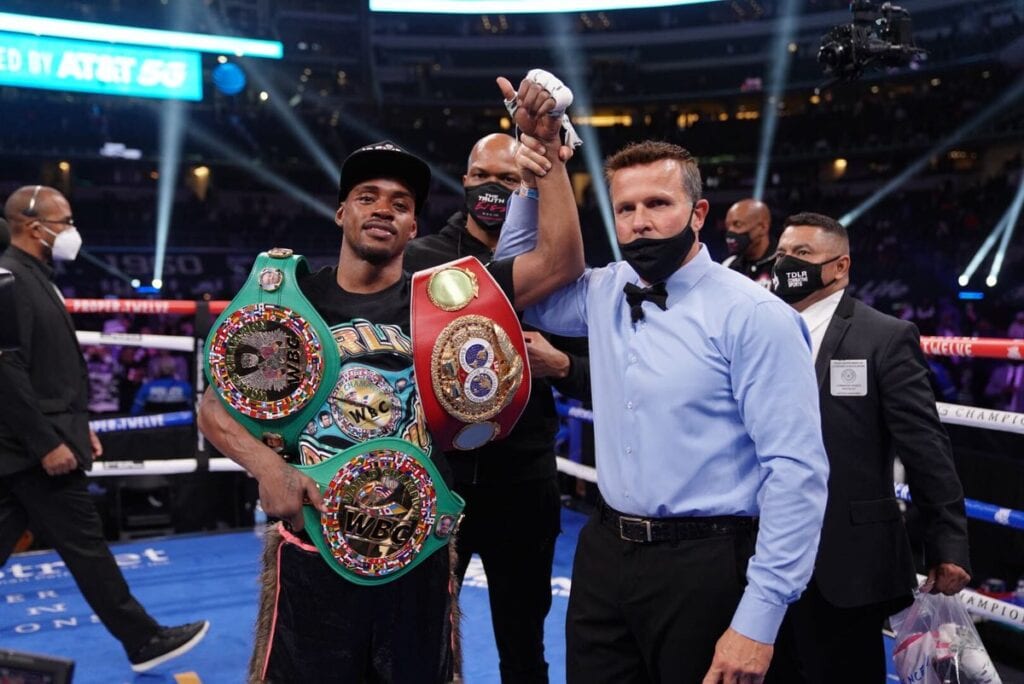 In his return to the ring 14 months after a horrific car crash, Unified World Welterweight champion, Errol Spence, put on a dominant performance Saturday night by scoring a 12-round unanimous decision over Danny Garcia to retain his IBF/WBC World titles.

Spence won by scores of 117-111 and 116-112 on the other two cards in a fight that he controlled from the opening bell with his straight right jab and left hands behind it.

Garcia, the former Unified Junior Welterweight Champion lost for the third time in his career bidding for a Welterweight Title, as he never could sustain offense against Spence’s high guard and elusive movement.

Spence improved to 27-0 with 21 KOs and answered all critics or whether he would have serious ring rust and apprehension from the one car accident in Dallas in October of 2019 that sent his vehicle catapulting across the median with him being thrown from it.

Spence escaped with only a concussion and slight fracture of his right jaw. However, he was unable to train for more than two months after the crash.

However, in his return in his home area of AT&T Stadium in Arlington, TX, the champ out landed Garcia 187 to 117 over the course of the 12-round fight. Both fighters scored 103 power punches for the bout, but it was an 84-14 margin in jabs landed that showed Spence in complete control.

Spence was scoring so effectively with the jab that Garcia’s left eye began to swell in the middle of the fight and became more of a problem in the final few rounds.

Known as “The Truth,” Spence closed the fight strongly by scoring more than Garcia over the final three rounds of the bout to seal his win.

“Ya’ll have to forgive my cobwebs out there tonight. But, next time I’ll be back and I’ll be 120%,” Spence told Fox Sports in his post fight interview. Spence also repeated that he knew Garcia would be a tough opponent in his first fight back, “I knew I had to train for Danny Garcia…. He’s a great fighter. It motivated me.”

Saturday’s night’s win was Spence’s first, since capturing the WBC belt to add to his IBF World title with his 12-round decision victory over Shawn Porter in Los Angeles in September of last year. The car accident came just 12 days after that victory.

Now, the attention will turn to what Spence will do next? There is speculation that he may be fighting Porter in a rematch or could go for a mega pay-per-view with WBA World Champ and future Hall of Famer, Manny Pacquiao.

Pacquiao captured the WBA belt in his last bout, now a year and a half ago in a 12 round decision of previously unbeaten champ, Keith Thurman.

One fighter that very much would love a shot at Spence’s titles and a huge payday is WBO 147 lb. champ, Terence Crawford. Crawford most recently defended his title by TKO over Kell Brook in Las Vegas, and he was in attendance to see Spence dominate Garcia Saturday night.

Spence refused to name a possible next opponent saying to Fox immediately afterwards, “I just bought a new ranch and I have horses and some new chickens. And, I want to enjoy this time with them and my family.”

One thing is for sure, he silenced all critics and doubters after the car crash and looked like his dominant self on Saturday night.