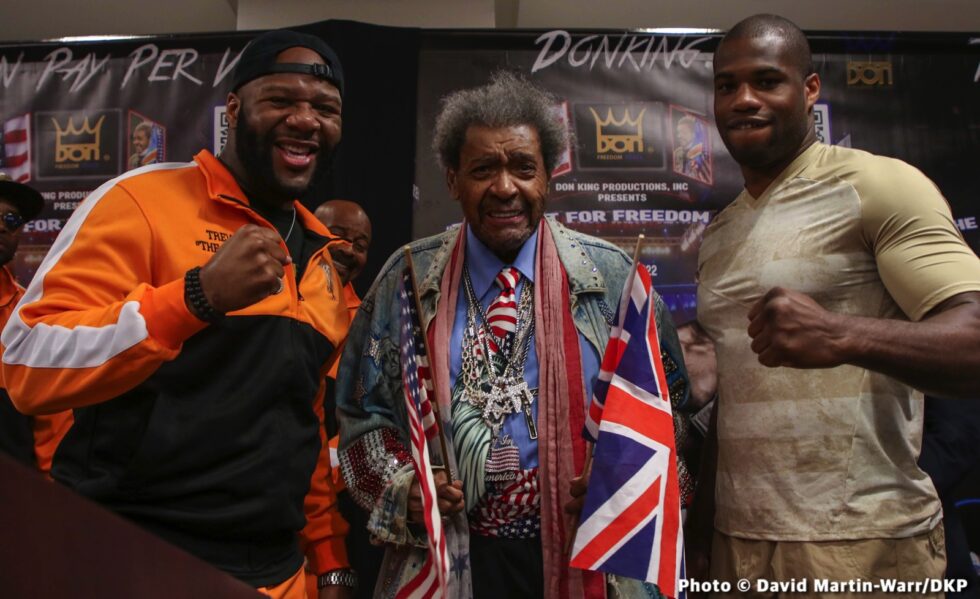 Daniel Dubois still has a belief that he belongs in the heavyweight championship conversation and Saturday afternoon in Miami, FL he only helped his cause by wiping out WBA secondary Champion Trevor Bryan on a 4th round KO.

Dubois was the younger, sharper fighter from the beginning and dominated the action even in Bryan’s adopted backyard of South Florida. The end coming with a hard left to the chin by the fighter known as “Dynamite” and Bryan fell face-first to the canvas unable to beat the count at the 1:54 mark of the fourth frame.

Dubois, 18-1, 17 KOs, gets his hand raised in victory for the third straight time since suffering his only career loss in a battle at that time of unbeaten heavyweights with fellow countrymen Joe Joyce. Joyce, who’s now ranked #1 by the WBO, stopped him after fracturing Dubois left eye orbital in A ninth-round TKO in November of 2020.

Since then Dubois has regrouped, including demolishing little-known American Joe Cusumano last August in his USA debut in Cleveland, Ohio on the undercard of the first Jake Paul-Tyron Woodley PPV bout. Bryan was making the second defense of his WBA secondary championship Saturday (Oleksandr Usyk holds the world title for the WBA).

But, Bryan, now 22-1, was clearly outclassed from the beginning by the Englishmen on this day. Du Bois continued to score with solid jabs and hard right hands early on in the fight and wobbled Bryan near the end of the third round. The New York- born Bryan appeared to be winded already just three rounds into the fight and Dubois, eventually finished him after landing a solid overhand right and then seconds later after a brief clinch, the final blow to the chin with the left.

With the victory, Dubois is now the mandatory challenger for Usyk, but it’s going to be a while before he gets that opportunity. This is, because Usyk is slated to rematch Anthony Joshua later this summer for the unified WBA/WBO/IBF titles. Then, it’s believed that the winner of that fight will take on WBC heavyweight champion Tyson Fury in an undisputed contest.

Still, Saturday night demonstrated Du Bois is a force to be reckoned with with big-time power as he has now scored a knockout in each of his last six victories