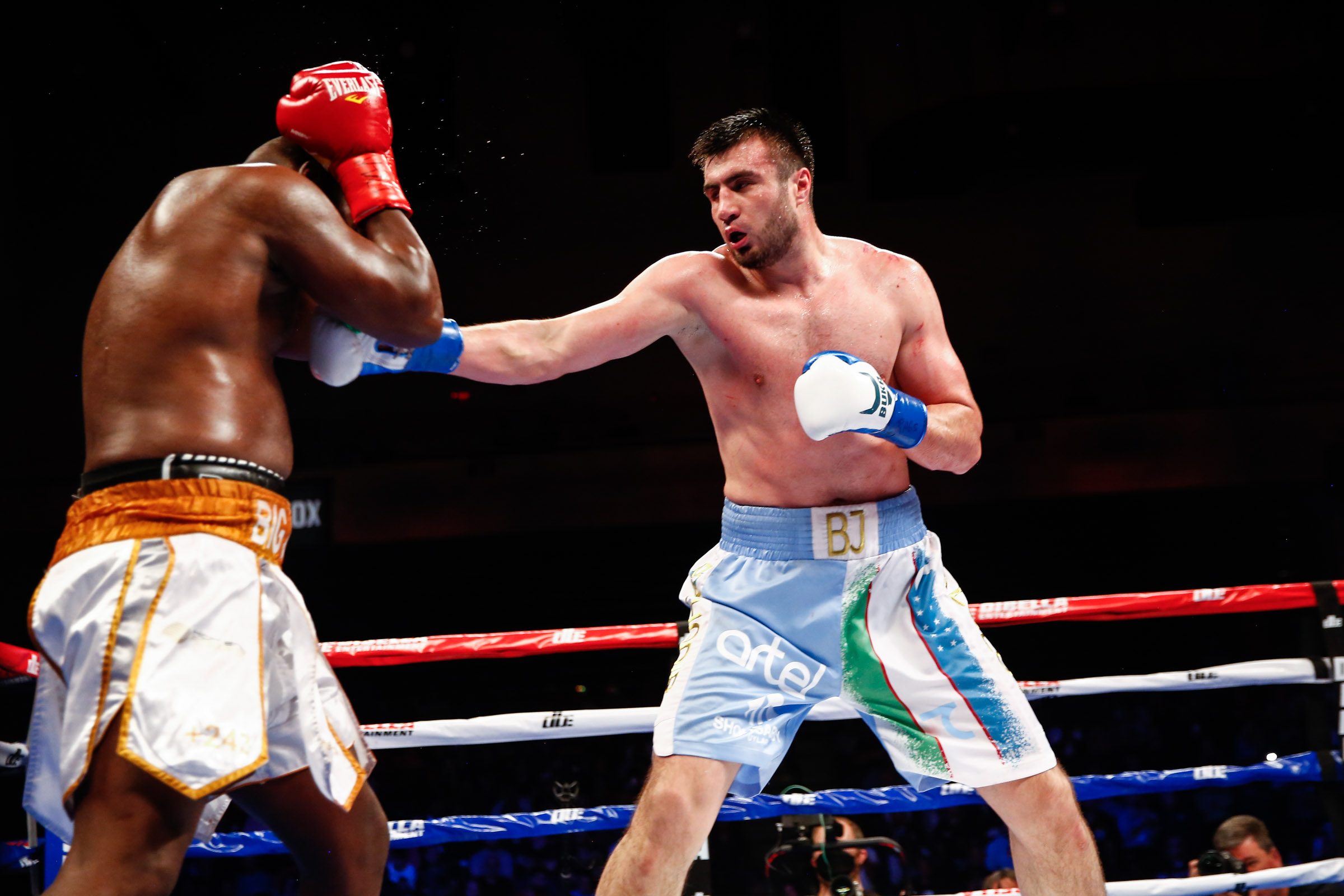 Undefeated heavyweight knockout artist Bakhodir Jalolov took his time on Friday night, but ultimately closed the show in dramatic fashion with an eighth-round knockout over Jack Mulowayi in the main event of the ShoBox: The New Generation telecast at Turning Stone Resort Casino in Verona, N.Y. Jalolov’s latest win helped kick off the International Boxing Hall of Fame Induction Weekend in nearby Canastota, N.Y.

Known as “Big Uzbek”, the 6-foot-7 Jalolov, a two-time Olympian and 2020 Gold Medalist from Uzbekistan, improved to a perfect 11-0 with 11 KOs when he landed a huge left hand that sent Mulowayi (11-3-1, 7 KOs) flat on his back in the eighth and final round.

KO TO CLOSE THE SHOW 💥@BakhodirJalolov knocks out Jack Mulowayi in the final round to remain undefeated! #SHOBOX pic.twitter.com/s8fVd37P8I

“I’m feeling really good about the performance,” said the 27-year-old Jalolov. “The opponent was at a really good level and a great fighter. He was a really tough, durable guy. I landed some big shots on him and he can take a punch.”

In front of a who’s who of boxing royalty including the likes of Andre Ward, Shane Mosley, Antonio Tarver and Terence Crawford, Jalolov put an exclamation mark on an exciting night of boxing during an historic weekend of Hall of Fame inductions which will include the last three classes of inductees during Sunday’s ceremony.

In addition to having already won several pro fights, Jalolov was allowed by the International Olympic Committee to go back and compete as an amateur in the year-delayed Tokyo Summer Olympics last August. He won the Gold Medal in the super heavyweight division beating American Richie Torrez in the final. That has added to the interest and intrigue in the massive fighter now trying to climb the ladder as a pro contender.

Hear Dan Rafael talking more about the trilogy Hall of Fame induction class in New York this weekend on our “Big Fight Weekend Preview” by pressing play below,

Jalolov was dominant throughout the entire fight, with the only question being whether or not he would continue his knockout streak? It looked likely in both the third and fifth rounds, as Jalolov wobbled Mulowayi but the game Belgium showed heart in making it out of both rounds unscathed. In the sixth round, Mulowayi was dropped for just the second time in his career by a left cross as the bell sounded. He rose to his feet and beat the count, but was knocked down for good with yet another signature left hand at 1:20 of the final round.

“I thought I was going to stop him at the end of the sixth round when I dropped him, but the referee let him continue and the round was over,” said Jalolov, who was deducted a point for holding in the fourth round. “I thought that was the time. But I had to wait until the final round. I’m happy that I got the stoppage. I feel like I hurt him three or four times.”

Jalolov went past the fifth round for the first time in his career, landing 47 percent of his power punches and out-landing Mulowayi 99-17 in total punches.

.The event was promoted by DiBella Entertainment, whose owner, Lou DiBella, is a 2020 Hall of Fame inductee and will be formally inducted along with the classes of 2021 and 2022 on Sunday.