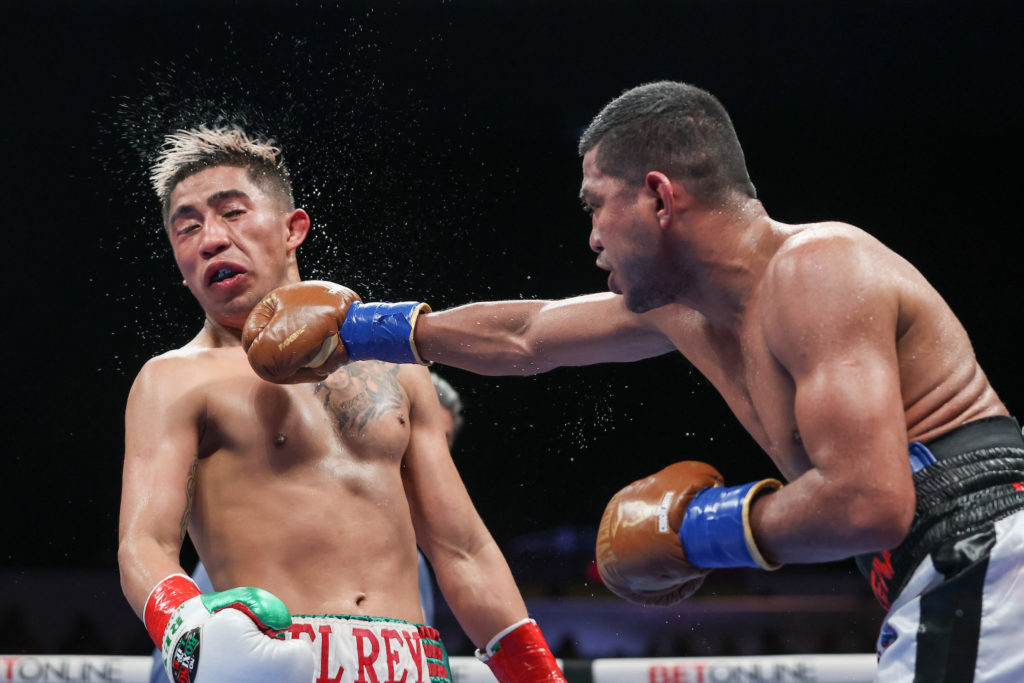 Having lost out on fighting a trilogy title bout with Juan Francisco Estrada due to him having Covid 19, former multi-division world champ, Ramon “Chocolatito” Gonzalez wasn’t sure if his Saturday night Matchroom Boxing replacement main event was going to happen either? However, after a day of controversy over whether an overweight, world Flyweight titleholder Julio Cesar Martinez was even going to be allowed to fight, Chocolatito dominated him in a unanimous decision win.

Chocolatito, a former three division world champ who improved to 51-3, 41 KOs, took control from the second round on, especially with his trade mark hard right hands that have dispatched so many other opponents. He landed two significant ones in the second round that backed the smaller Martinez to the ropes.

The capacity crowd at San Diego’s Pechanga Arena tried to bolster “El Rey” Martinez with chants of “Mex-i-co, Mex-i-co” resounding the through the arena early in the bout. And, Martinez did have a good fourth round landing combinations, especially lefts to the body with rights to the head.

However, the 34 year old Gonzalez regained control of the fight and then had a tremendous sixth round where he pressured and punished the seven years younger “El Rey” along the ropes. Chocolatito landed 39 shots in what was his best round to that point of the bout.

While there were no knockdowns in the fight, he continued to be more effective throughout landing 374 shots to just 182 for Martinez over the distance. Chocolatito registering a staggering 346-682 (51%) power shots, as well.

So, the decision was not in doubt, especially when Gonzalez remained the aggressor into the 10th and backed Martienz to the ropes, rocking him with an uppercut and then another three punch combo to finish off another round. He swept the final three rounds on all three scorecards.

““I’m very surprised he took that much punishment,” Gonzalez told DAZN through an interpreter in the ring. And, not surprisingly, he added that he wants , “My bosses will decide what is next for me. Whatever they decide, as long as it pays well.

The satisfying win for Chocolatito capped off a controversial weekend on the scales. As we wrote Friday night, there was doubt that the bout would take place. This after the WBC Flyweight champ Martinez, who had five weeks to train after Estrada withdrew from the main event, showed up over 2 lb. over the Super Flyweight limit. He came back two hours later and was still at 116.4 lb. Friday.

At that point, Chocolatito and his camp had all but decided to cancel the bout until a compromise was reached. Martinez would give Chocolatito 10% of his purse ($25,000)  and give back another $25,ooo to the California Athletic Commission. And importantly, he had to weigh-in again Saturday morning under an agreed to limit of 125 lb. for the re-hydration of the smaller fighters.

“El Rey” was easily under that limit by three pounds and the fight was still on. However, that was his only small victory of the weekend.

Now, it looks like we’ll get the trilogy Chocolatito-Estrada later this year.