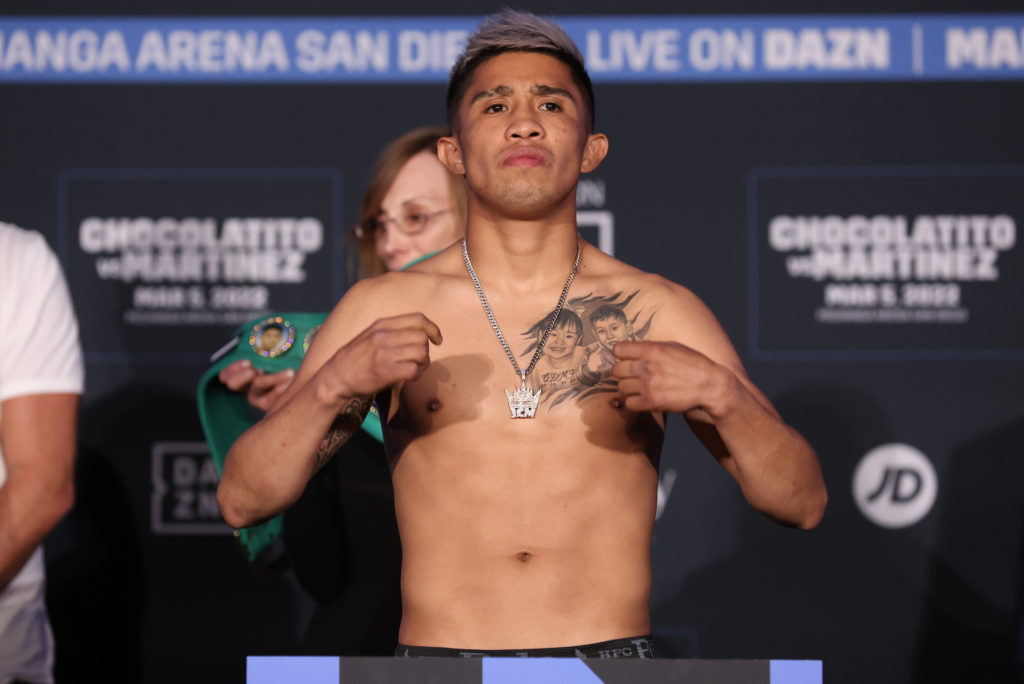 It was a wild Friday in San Diego, as for a while it looked as though the Matchroom Boxing Main Event between Roman “Chocolatito” Gonzalez and “El Rey” Julio Cesar Martinez was not going to happen. This due to Martinez being significantly over the contracted 115 lb. weight limit.

First, Martinez, who was slated to move up from Flyweight at 112 lb to meet Chocolatito at 115 lb., came in more than 2 lb above at 117 lb.+ at the late morning Pacific Time weigh in. With the fight slated to headline the Saturday night DAZN /Matchroom show, Martinez was given two hours to come back and try to lose the weight.

But, he did not come close, still weighing over 116.4 lb. on the second try. That’s when an agreement was finally brokered that Martinez will have one last chance after re-hydrating on Friday night and Saturday morning to not be over 125 lb. or the fight will, in fact, be called off.

That would be a serious blow at the last minute for Matchroom on a main event that was already put together in late January. This came, when it was learned that Juan Francisco Estrada contracted Covid-19 and could not fight Chocolatito for a third time defending the WBC Super Flyweight Championship.

Saturday night’s bout is essentially an “eliminator” from the WBC for the winner to get their chance at Estrada later this summer.

Hear us previewing the bout (if it happens) on “Big Fight Weekend” podcast with guests Todd Grisham of DAZN and Gayle Falkenthal of NYFights.com, who’s based in San Diego by clicking here:

Gonzalez is 50-3, 41 KOs and is one of the most exciting knockout fighters in the world at the smallest  classes.He and Estrada fought a thrilling, action punching bout in Texas last March with Estrada nosing out Gonzalez on a decision.

Martinez was last in action in June, when he defended his 112 lb. world title with a sixth round beating of overmatched Joel Cordova in Guadalajara, Mexico. “El Rey” 18-1 (14 KOs) has now defended his Featherweight title three times and was willing to help salvage the date and what will be a sold out venue for his fight.

So, now we wait to see if Martinez does too much re-hydrating and eating and ruins the Saturday fight, once and for all.