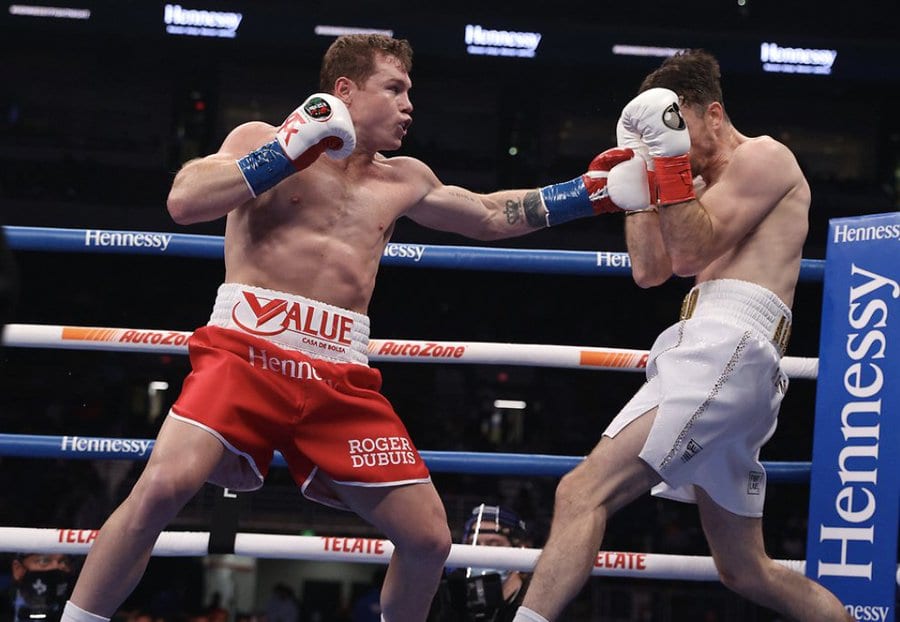 Canelo planned February Mexico Fight Will Now Be In USA

We’re already looking forward to another Canelo Alvarez world title bout in February, but word Thursday is he will not be able to fight in his home country of Mexico.

ESPN Deportes reported first that the potential plans to have Alvarez defend his unified WBC/WBA 168 lb. titles against contender Avni Yildirim at an outdoor stadium in Guadalajara February 27th will be changed.

ESPN’s Salvador Rodriguez wrote that due to continued concerns with health and safety over Covid-19, Canelo, his promotion and DAZN streaming will look to move the bout to the U.S.,

“In the next few days, the announcement of the future of the international boxing star is expected, since the advances both for February and May are great, but they would be destined for U.S. soil where conditions have allowed to hold more boxing events with public under certain measures.”

Later in the item Rodriguez added,

“With the high salaries of the Mexican Álvarez, his return home has become more and more complicated, but since he became a free agent a few months ago, he was willing to make sacrifices in the economic part in order to fulfill the dream of returning to territory tricolor; However, now the conditions of the pandemic have not allowed it and they are not going to cling to something that will backfire.”

Alvarez, 54-1-2, has not fought in his home country of Mexico in a decade. That’s when he was victorious twice in 2011 with the last fight being a TKO of Kermit Cintron defending his WBC Jr. Middleweight title in Mexico City. As Rodriguez also wrote, Alvarez was looking at this opportunity as a give back to his home country and his legions of Mexican fans.

Instead, it is highly likely he will fight again in Texas, where he just defeated WBA Super Middleweight champ Callum Smith of England at the Alamodome in San Antonio. That was with approximately 15,000 fans present in late December.

There have now been several big time championship or noteworthy fight cards to be hosted over the last two to three months in the “Lone Star State” with some fans/live gate.

That, includes unbeaten star Gervonta Davis having scored a devastating knockout of Leo Santa Cruz in San Antonio’s Alamodome on PPV on Halloween night. Then, Errol Spence successfully defended his Unified World welterweight Championship with a dominant 12-round decision over Danny Garcia on PPV at Arlington, Texas’ massive AT&T Stadium – the home of the Dallas Cowboys.

And, last Saturday night a Lightweight contender showdown between Californian Ryan Garcia and England’s Luke Campbell had a socially distant crowd of just over 5,000 inside the American Airlines Center. Garcia kayoed Campbell with a single body shot in the 7th round in the arena where the Dallas Mavericks play basketball and the Dallas Stars play hockey.

It’s unclear from the article where Canelo would prefer to fight, but those are the logical venues, especially only eight weeks away from the likely easy fight with Yildirim.

It’s believed that Alvarez would then fight England’s Billy Jo Saunders next in May on the festive “Cinco de Mayo” weekend, as he has done numerous times in his career.