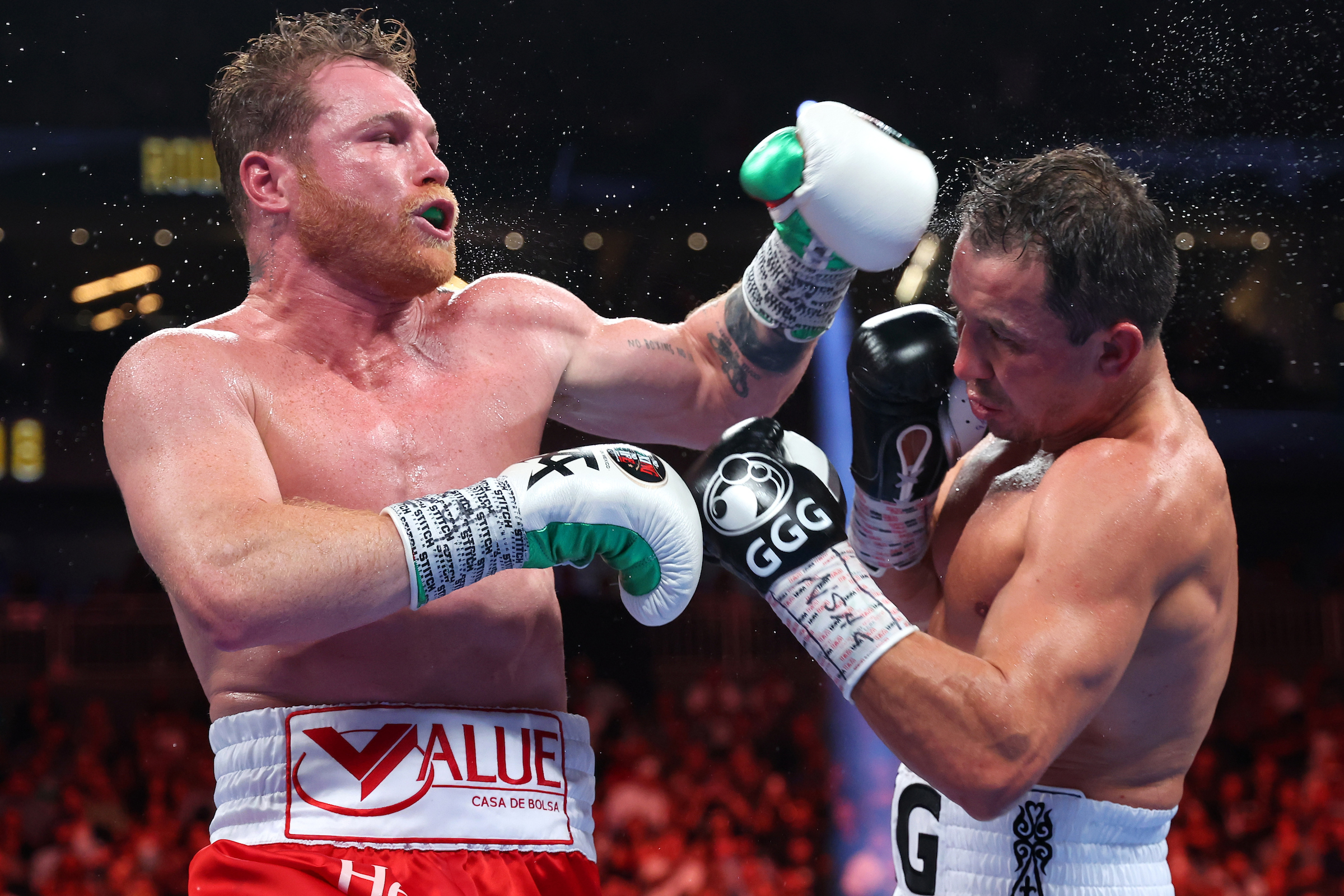 LAS VEGAS – The Canelo Alvarez-Gennadiy Golovkin trilogy, which produced two classic fights and a pair of controversial decisions, ended with a whimper, but at least with a definitive conclusion in fight No. 3 on Saturday night at before a heavily pro-Alvarez crowed of 19,519 at T-Mobile Arena.

In a fight that paled in terms of action compared to their first two, Alvarez won a clear unanimous decision to retain the undisputed super middleweight title and bounced back from a decision loss challenging light heavyweight titleholder Dmitry Bivol in May.

Judge Dave Moretti had it 116-112 and Steve Weisfeld and David Sutherland both had it 115-113 for Alvarez in a fight he seemed to dominate far more than the scores indicated. Big Fight Weekend had Alvarez winning 119-109, a common score from ringside media.

The series – with each bout taking place at T-Mobile Arena and on Mexican Independence Day weekend — began with them as friendly rivals and degenerated into bad blood on both sides. Alvarez talked throughout the promotion about how personal the fight was to him because of all of the disrespect Golovkin had showed toward him for the past few years. But when the fight was over they fell into a lengthy embrace and had put it all behind them.

“(Golovkin is) a really good fighter. He’s strong. That’s why we are here. I’m going to keep going forward, keep my legacy going.”

Asked if their beef was settled, Golovkin answered, “Yes, 100 percent.”

The first fight in 2017, for Golovkin’s three middleweight world titles, ended in a heavily disputed split draw most had Golovkin winning and the second fight. One year later Alvarez won a disputed majority decision to take GGG’s belts and end his historic middleweight title reign after a division record-tying 20 successful defenses.

But the bad blood began in the lead up to the second fight, which was delayed because Alvarez failed a drug test and was suspended. He was positive for a trace amount of clenbuterol, which he blamed on tainted Mexican beef.

All of those storylines made for a compelling and much anticipated third fight, but it didn’t come close to living up to the hype, perhaps because Golovkin looked his 40 years.

“More tactical, like chess,” is how Golovkin described the fight compared to their first two all-out battles.
Chapter 3 began with a feeling-out round with Canelo probing with his jab and Golovkin studying him but not doing much of anything.

Alvarez had repeatedly said he would look for a knockout from the opening bell with the hope of ending GGG’s career, but he knew that was not in the cards almost immediately.

Alvarez began to look for body shots in the second round and also launched his overhand right but didn’t catch Golovkin cleanly.

While Golovkin continued to be relatively inactive, Alvarez nailed him with a solid left hook in the fourth, although GGG did not budge. Moments later, Alvarez landed a solid right hand to the head.

Four-division champion Alvarez (58-2-2, 39 KOs), 32, of Mexico, put a seal on a good fifth round when he landed a hard overhand right with about 20 seconds left with Golovkin doing nothing in return.

With little happening in the sixth round the crowd began booing as the clock wound down. Alvarez continued to control the fight in the seventh and landed an overhand right to the side of Golovkin’s head that got the crowd excited.

Finally, in the ninth round Golovkin (42-2-1, 37 KOs), a Kazakhstan native fighting out of Santa Monica, California, went on the offensive and had success. He landed a right hand to the head and got in a few more solid shots that backed Alvarez up. Alvarez came back in the final seconds with a combination to the head, but GGG did enough to win the round.

There was good two-way action in the 10th round, but it was relative to the lack of it overall action in the fight but Golovkin was closing better than he started

“It didn’t surprise me. I know him,” Alvarez said of Golovkin’s finish. “He’s a strong fighter. For me I’m just glad to share the ring with him. He’s a really good fighter. I’m glad to be involved in that kind of fight.”
Of his relative success in the final few rounds Golovkin said it was because of his “strategy. Second half, I feel not bad. It’s a good fight.”

With the trilogy in the books, both men have clear paths ahead.

Alvarez will address his left hand injury and then hopes to face Bivol in a rematch as long as Bivol defeats Gilberto “Zurdo” Ramirez on Nov. 5.

As for Golovkin, he remains a unified middleweight champion and with no plans to retire will go back to 160 pounds.

The ugliness and bad blood between them had melted away and after 36 rounds together in the ring in three fights over five years the rivalry slipped into history.

‘Bam’ Rodruguez Grinds Out Win To Retain Junior Bantamweight Title
What’s Next for Canelo And Golovkin After Saturday Night?
Advertisement
To Top