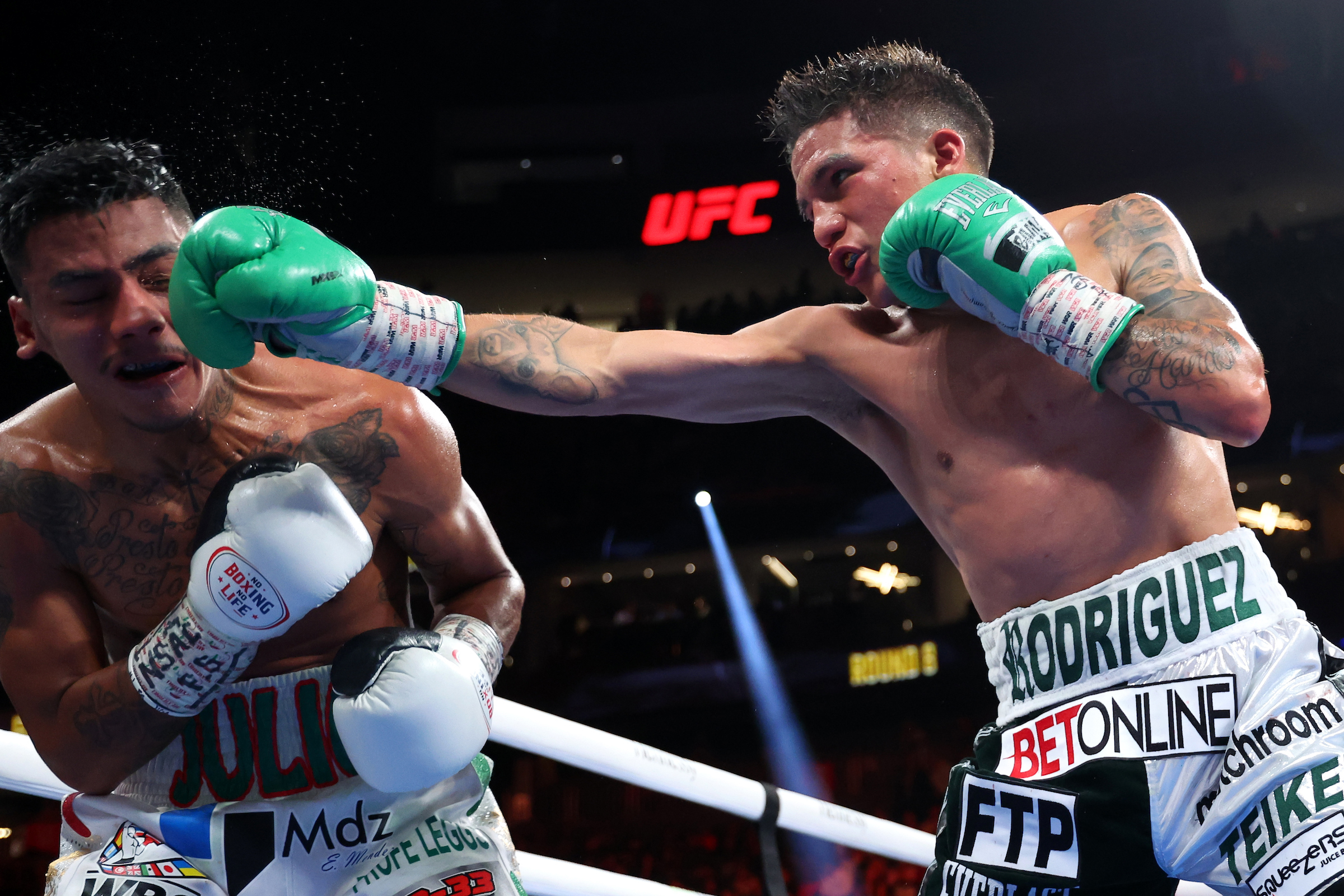 Rodriguez, who at 22 is the youngest active world titleholder in boxing, retained his 115-pound title for the second time and won his third fight of the year although he by no means had an easy time with Gonzalez.
The judges scored it 118-109, 117-110 and 114-113 for Rodriguez, who got hit quite a bit and did not have the kind of impressive performance he had in his two big wins earlier in the year.

Rodriguez was considered a top prospect when he burst on the world scene in February and won the vacant belt. He dropped and handily outpointed former titlist Carlos Cuadras in a fight that he took on six days’ notice – and moved up in weight for — as a replacement for the ill Srisaket Sor Rungvisai.

Then in June, Rodriguez thrilled a San Antonio hometown crowd in his first defense by knocking out former two-time champion Sor Rungvisai in the eighth round of an even more impressive performance than his victory over Cuadras.

Next up was Gonzalez, who went back and forth with for much of the fight.

There was a lot of back-and-forth action in the fourth round when Gonzalez (28-5-1, 11 KOs), 25, of Mexico, found some success as he forced Rodriguez to the ropes put a tremendous amount of pressure him. But Rodriguez (17-0, 11 KOs) also got his licks in as both men let their hands fly.

They threw plenty of body shots but also strayed low and referee Kenny Bayless warned them at the same time in the fifth round to keep their punches up.

In the eighth round an accidental head butt caused a brief timeout while the ringside doctor examined Gonzalez. Right after the fight resumed, Rodriguez hit Gonzalez low and Bayless warned him again.
And then Rodriquez went low again. Gonzalez went to the canvas and Bayless docked Rodriguez one point while giving Gonzalez time to recover.

Rodriguez had a strong ninth round, perhaps looking to make up for the point deduction, and attacked Gonzalez all out and landed several clean punches. The 10th was more of the same as Rodriguez continued his late-fight surge, although he did hit Gonzalez low yet again in the 11th round, although he was not penalized.
With the win, Rodriguez may return on Dec. 3 to fight in the co-feature of the third fight between lineal champion Juan Francisco Estrada and legendary four-division champion Roman “Chocolatito” Gonzalez. If Rodriguez wins on that card, Matchroom Boxing promoter Eddie Hearn would like to match him with the main event winner next year.

Israel Gonzalez dropped to 0-4 in a world title shots, having also lost Jerwin Ancajas by 10th-round knockout in 2018, by majority decision to Kal Yafai later in 2018 and by wide unanimous decision to Roman Gonzalez in 2020.

Akhmedov (19-1, 14 KOs), 27, of Kazakhstan, was quick with his punches and put together many combinations while Rosado (26-16-1 15 KOs), 36, of Philadelphia, never landed much of anything of note. A right hand in the fifth round rocked Rosado, who was cut in his hairline.

Fighting on his second Alvarez undercard, Williams won 97-92, 97-92 and 96-93 in his first fight since returning to longtime trainer Dwight Pratchett for the fight after an amicable split with Kevin Cunningham, who he had worked with him his previous three fights.

As the more aggressive Williams, who threw a lot of right hands, began to tag Conway more regularly in the later rounds, Conway started to hold.

In the ninth round, Williams (12-0, 9 KOs), 26, of Houston, dropped him to his knees in a corner with a quick right uppercut. Conway (17-3-1, 3 KOs), 26, of England, got up quickly but his face was a smeared with blood.
Conway fell to 0-2 in fights in the United States, having dropped a 10-round split decision to Souleymane Cissokho on the Alvarez-Billy Joe Saunders card in May 2021 in Arlington, Texas .