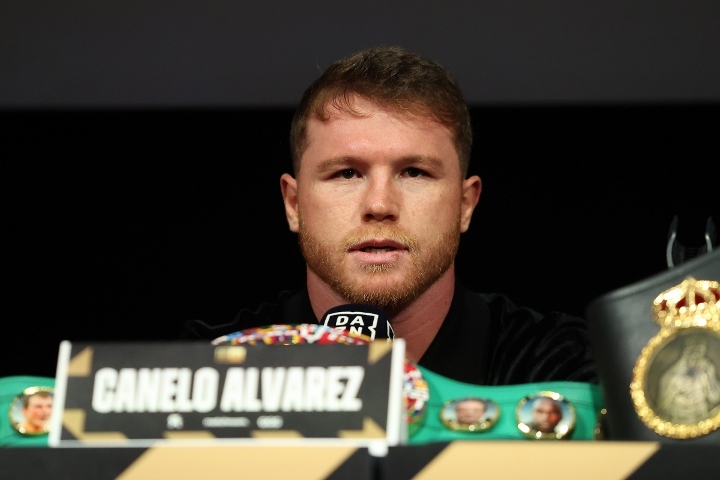 We’re beginning to understand more the full motivation for undisputed super middleweight champ and future hall of famer Canelo Alvarez wanting to fight Gennady Golovkin for the third time. This, as he and “Triple G” met with the media to crank up publicity for their upcoming September pay per view battle.

Alvarez and Golovkin had their first of several kickoff press conferences Friday in Los Angeles and Canelo made it clear that it’s not just money or prestige that he’s after with this bout, but rather, he has personal motivation too,

“He talked a lot of things. That’s why it’s personal. I just can’t wait to be in the ring.”

Now, it’s not all positives for Alvarez (57-2-2) at the moment, this after he suffered just his second pro loss, and first in 9 years, when Russian WBA light heavyweight champ Dmitry Bivol out boxed him for a 12 round decision in Las Vegas in May. Canelo did exercise his rematch clause to fight Bivol again, but has chosen to stay with the original plan to fight GGG in September after Bivol.

This is no small part because the Golovkin fight is much more lucrative for all involved, as GGG is regarded as one of the top 2-3 middleweight champs of all-time. And, he and Canelo fought two dramatic fights a year apart with the first one being declared a draw and Alvarez getting the second win by narrow decision.

And, Golovkin (42-1-1) has recovered from that loss to Alvarez to win both the IBF and WBA world titles at 160 lb., including his TKO win in April over Ryota Murata in Japan. However, he’ll move up to fight Alvarez at super middleweights for all the belts in September.

A fight that he is equally ready to have to not only avenge his only pro loss, but to try to shut Alvarez up at the same time.