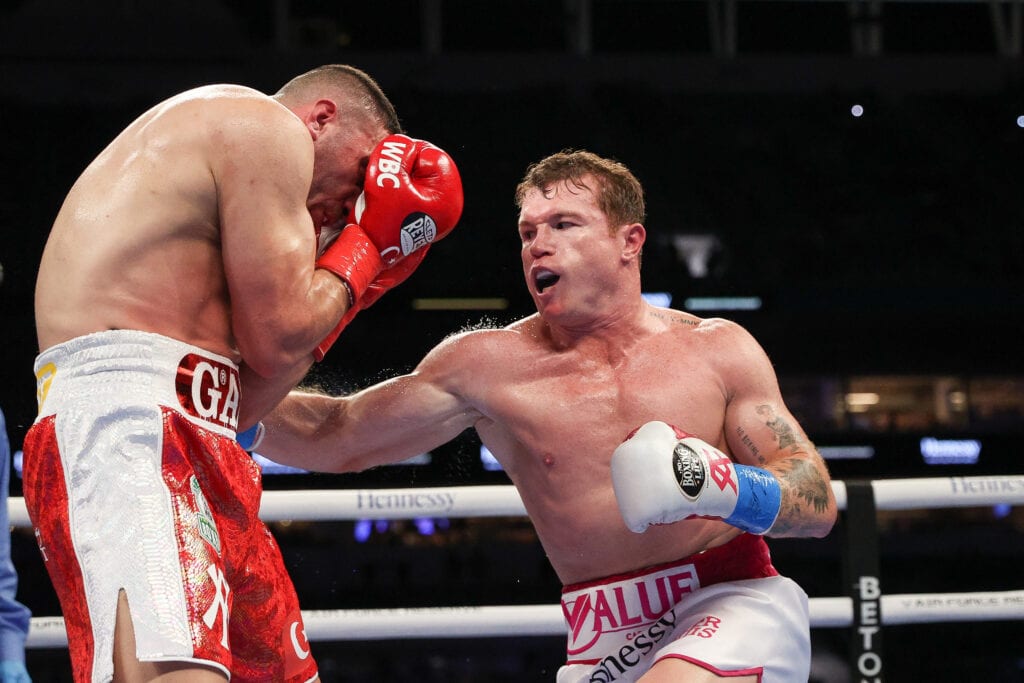 In the latest twist to the saga of whom four division world champ Canelo Alvarez would fight next and when? The Mexican legend has come back around to an Undisputed fight with IBF Super Middleweight Champion, Caleb Plant, that will reportedly happen now in November.

Mike Coppinger of ESPN had the confirmation first that Alvarez has finally agreed to at least part, if not most, of what Premier Boxing Champions wanted (including a second fight for them) to get the proposed bout with Plant finalized,

Sources: Canelo Alvarez and Caleb Plant have agreed to a deal for a November pay-per-view fight presented by PBC. All four 168-pound belts on the line. Full story coming to ESPN pic.twitter.com/47Q1FEApvi

Per Coppinger’s report, it will be a PBC/Fox Sports PPV just like had been negotiated for September 18th, however, Alvarez decided ultimately to not agree for that date. And, he even flirted with possibly trying to fight unbeaten, WBA Light Heavyweight champ Dimitry Bivol of Russia instead.

Alas, that didn’t materialize either, so, Canelo is back to his chase of being Undisputed in second division. He previously won all the Middleweight titles off Gennady Golovkin in September of 2018.

Alvarez tweeted later Thursday afternoon that the fight is confirmed for November 6th, but the site, while believed to be Las Vegas, is still TBD.

For his part, Plant remained patient and even expressed frustration late last month that Alvarez had been given concession after concession, financially and otherwise, to still not agree to fight on September 18th.

“It was always agreed that it was a [title] unification; no rematch for either fighter. Towards the end of negotiations they asked for a rematch when they lose. No problem, you can have the rematch as well, I just wanna fight.

“One that is absurd: If I get injured or sick then he gets a late replacement for the same amount of guaranteed money, but if he gets sick or injured, then we gotta wait for him,” Plant added. “We’re at seven-and-a-half weeks from the fight; we’ve lost valuable time that should be spent promoting and drug testing for a fight of this magnitude.”

Plant has a valid point about the late replacement negotiations and Alvarez’s demand to be able to make the same on everything and pick his late opponent clearly was the obstacle that kept the fight from happening in September.

There was also the ongoing debate about whether Alvarez would have to agree to a multi-fight deal with PBC to get the shot at Plant. That appears to have happened, as well.

Now, though? The eagerly anticipated fourth bout in less than 12 months for Canelo appears ready and likely in Las Vegas, as originally proposed, for late in the year.