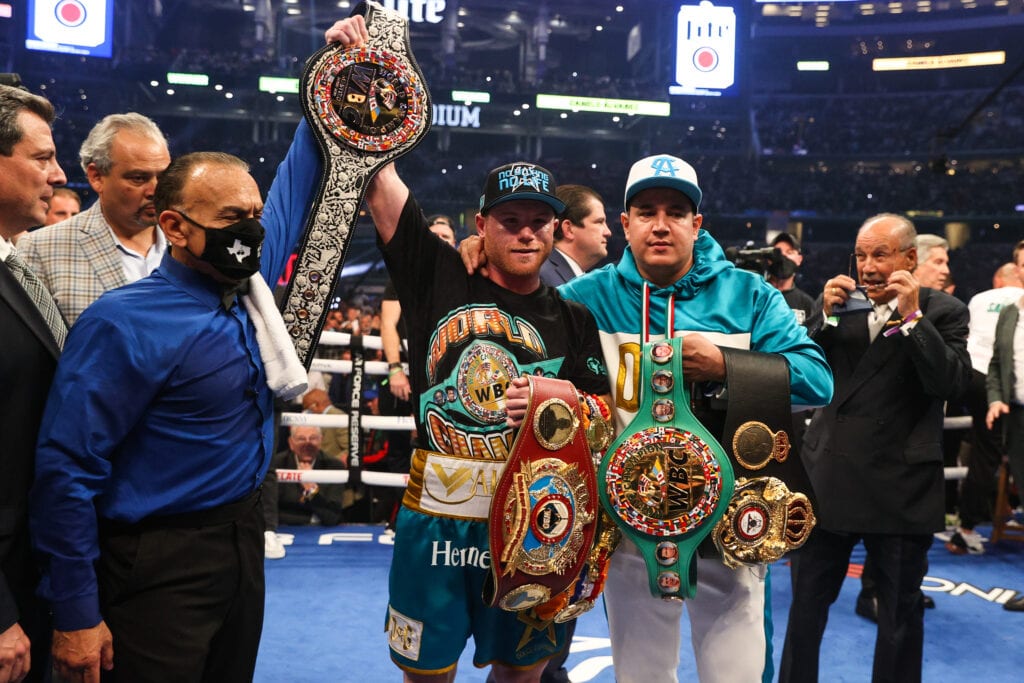 One of the obstacles that lingered for almost a year in the negotiations for Unified Super Middleweight champ, Canelo Alvarez, and IBF World Champ, Caleb Plant, was whether the Mexican star would be required to do a multi-fight deal with Premier Boxing Champions? Well, a report out Thursday night says the deal finally is done and apparently, Alvarez is only obligated for one PBC bout.

Boxing Insider Dan Rafael reported on social media first that he’s learned that Alvarez will face Plant on November 6th without an obligation to PBC, if he wins the Undisputed bout,

As it relates to #CaneloPlant, per source with knowledge of the deal, it is a one-fight agreement with PBC, no options. Canelo is a free agent after the bout, although he has a rematch clause should Plant pull the upset. #boxing

Thursday afternoon word leaked that the bout that has been discussed since last December between the four division world champ Alvarez and the unbeaten Plant, was finally done. Alvarez tweeted it himself a few hours later using November 6th as the date.

An official announcement could come as soon as Saturday night’s Manny Pacquiao-Yordenis Ugas PPV from PBC and Fox Sports. It is believed that Fox will be involved in the Canelo PPV, as well.

Hear us discussing the Canelo-Plant deal dynamics and more on the latest Big Fight Weekend Podcast by clicking below,

As for the particulars about the Undisputed bout and whether PBC backed off wanting a multi-fight deal with Canelo, just liked they’ve required from Pacquiao and all their prominent fighters, we wrote more about it on Thursday.

PBC/Fox Sports were in talks all through June and July for a Canelo-Plant PPV just like with the target of “Mexican Independence Day” weekend, September 18th in Vegas.  However, Alvarez decided ultimately to not agree for that date and the terms. And, he even flirted with possibly trying to fight unbeaten, WBA Light Heavyweight champ Dimitry Bivol of Russia, instead.

Alas, that didn’t materialize either, so, Canelo came back to his chase of being Undisputed in second weight division. He previously won all the Middleweight titles off Gennady Golovkin in September of 2018. Alvarez (56-1-2, 36 KOs) was last in the ring in May, when he stopped England’s Billy Joe Saunders, in front of over 60,000 fans in Arlington, TX, to capture the WBO 168 lb. belt.

For his part, Plant has waited patiently through the Summer, but finally expressed frustration and revealed key details of the proposed bout to ESPN back in July.

“It was always agreed that it was a [title] unification; no rematch for either fighter. Towards the end of negotiations they asked for a rematch when they lose. No problem, you can have the rematch as well, I just wanna fight.

“One that is absurd: If I get injured or sick then he gets a late replacement for the same amount of guaranteed money, but if he gets sick or injured, then we gotta wait for him,” Plant added. “We’re at seven-and-a-half weeks from the fight; we’ve lost valuable time that should be spent promoting and drug testing for a fight of this magnitude.”

Plant has a valid point about the late replacement negotiations and Alvarez’s demand to be able to make the same money on everything, plus, pick his late opponent. That was clearly an obstacle that kept the fight from happening in September.

How much did Canelo relent financially?

Is there in fact an option for PBC on Canelo’s next fight, despite Rafael’s report?

Did PBC decide to “bet BIG” that Plant upsets Alvarez in November, which would force him to come back to them on lesser terms financially in a rematch?

All are unanswered questions.

But, something clearly changed for the fight to get done.

Boxing fans and observers are just glad that it did.