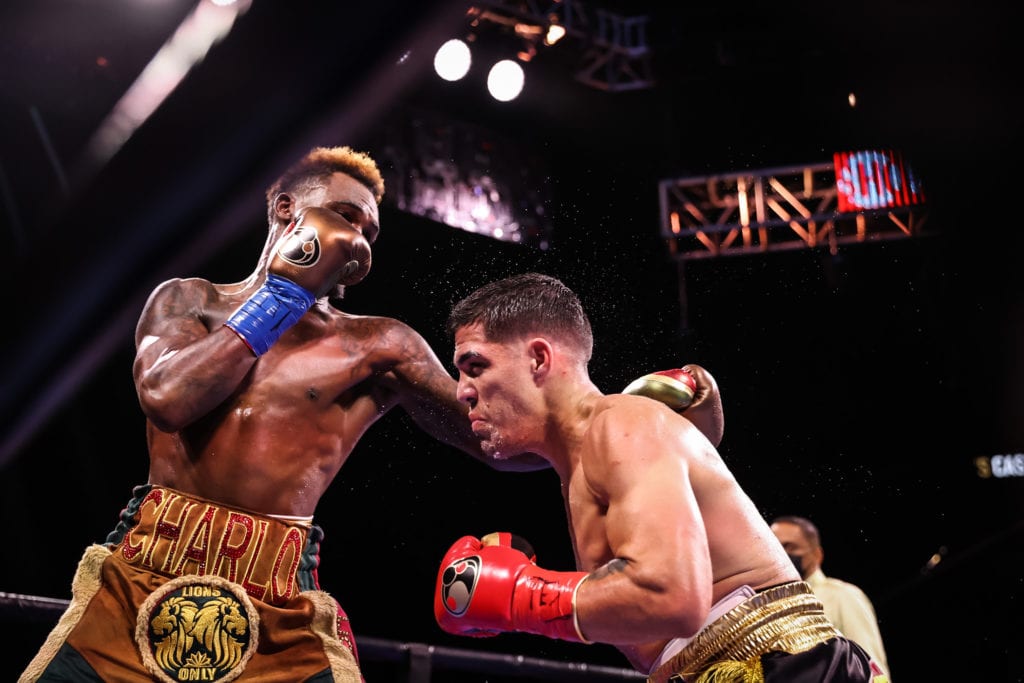 Brian Castano and Jermell Charlo Fight To A Draw

The four-belt era began thirty-two years ago. Brian Castano and Jermell Charlo tried to settle who would be the first person at Junior Middleweight, but in the end, it was a split decision draw.

The main event that aired on Showtime, coming from the AT&T Center in San Antonio, Texas, had a lot at stake as this bout determined who would be number one with a bullet at 154 pounds in this history-making event.

The opening round started as a feeling-out process between the two, as Charlo now 34-1-1 was looking to establish the jab, and Castano, now 17-0-2 was looking to land and try to attack the body. Big lead up into this fight, and what made it so intriguing was that Castano was the biggest volume puncher at 154 against least throwing in Charlo.

The second round saw a counter left hook land by WBC, WBA and IBF champ Charlo that buzzed the WBO champ Castano was the first real moment of danger in the fight, and he spent the rest of the round on the defensive, as he was visibly hurt by it. Castano was, however, able to stay upright with some solid defense to close out the round.

Castano, in the third, had his best moment of the fight as he caught Charlo with a counter hook and had him wobbled on the ropes. Despite landing an uppercut before the bell, Charlo was able to avoid any peril in the final moments of the round.

From here, the violence picked up.

Castano’s volume continued to give Charlo issues in the fourth as he kept getting unloaded on with combinations in the corner for most of it. Charlo’s trainer Derrick James advised Charlo that he was giving rounds away and staying off the ropes at the end of that round. At this point of the fight, he was right as Castano was winning these early rounds.

The sixth round had some solid two-way action as Charlo caught Castano with a shot, but took it and fired with his own. Both had flurries as the final minute of the round, but as it seemed for the first half of this fight, Castano seemed with the advantage. This was more of the same in the seventh, as Charlo once again had to deal with the lack of real estate while Castano kept throwing punches in bunches.

After 8 rounds, Brian Castaño has out landed Jermell Charlo, 119-78 in total connects — outlanding Charlo in 7 of the 8 rounds

Castano’s pressure continued as he continued his attack on the body of Charlo as the fight reached the championship rounds. At the start of the tenth round, you can see the urgency needed Charlo in the fight as he picked up throwing more, and it worked as a  straight jab early on by Charlo landed and had Castano on his bicycle as he was clearly hurt. This continued as punishing rights kept Charlo in his best round since the second of the fight.

Charlo was looking to end the night when the eleventh round started and made the adjustment that his corner had preached all night long. Castano, who was hurt, was also not throwing as much because of it but weathered the storm and was still able to fire back with shots of his own.

The final round was a close round with both men leaving everything in the ring, but the 129 unification bout in history went to cards that ended in the split decision draw.

Castano closed as a 3-1 underdog in the battle for 154 lb. supremacy, yet he controlled the action for the first 9 rounds.

“The draw wasn’t what I wanted to hear. If anything, I won this fight,” Charlo said in the ring to Showtime afterwards. “I hurt him more…Brian Castano is a tough warrior. He’s gonna give a lot of people problems, but like I said, my power is something serious at this weight division.”

When asked whether he knew he needed a knockout or not, Charlo added, “Yeah, my coach (Derrick James) told me I needed a knockout in the 9th round. I knew he knew what he was talking about…you know, this is my first time experiencing this (a draw) This comes with boxing, baby.”

For his part Castano told Showtime through an interpreter,

“I won the fight. There were some rounds that he did hit me. There’s no doubt about it. He hit me hard. But I won the fight, definitely.”

When asked about being hurt in the 10th and still needing to maybe win one or both of the last two rounds to get a decision, Castano added, “Yes, you’re right, in the 10th round I was hurt. I was trying to recoup a little bit at the start of the 11th round, but I did enough to win the fight.”

An awful way to end what was a great fight, but one that looked to be clearly for Castano. Now we must wait for either he or Charlo to be “Undisputed” by winning a potential rematch.