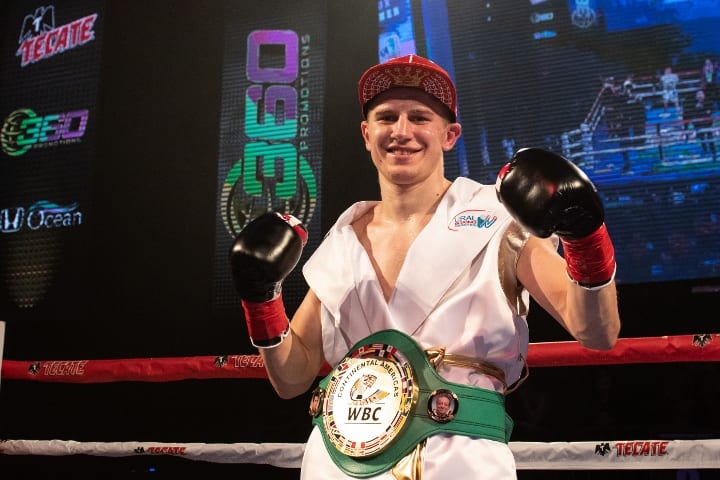 All three of Ring City’s events in 2020 will be broadcast live from Hall of Fame trainer Freddie Roach’s Wild Card Boxing Gym in Los Angeles.

“We are excited about the quality of the fights Ring City is delivering to fight fans,” said Head of Boxing Evan Rutkowski. “As a developmental platform, our mission is to put together the most competitive matches that challenge our fighters and entertain viewers. Bohachuck-Adams and Conwell-Ashkeyev are two matchups that we are confident will meet those goals.”

The hard-hitting Bohachuck has steamrolled through opposition on his way to an 18-0 record, all of which have come via knockout. Bohachuk, who trains with Manny Robles out of Legends Boxing Academy, proved himself with a knock-out win over Tyrone Brunson in October of 2019. Most recently, he put on an electric performance in September when he knocked out Alejandro Davila in six rounds out of Mexico. The Ukrainian-born Bohachuck, who is promoted by Tom Loeffler at 360 Promotions and Ural Boxing, continues to take the Southern California boxing world by storm with his dominant performances in the ring and magnetic personality out of the ring.

“I’m looking forward to fighting Brandon Adams; He’s an experienced challenger who has already fought for the world title and I am up for this challenge,” Bohachuk said. “I appreciate Ring City giving me this opportunity to fight on NBCSN from the legendary Wild Card Gym.”

The battle-tested Adams, who hails from Watts, C.A. and works with accomplished trainer Dub Huntley, challenged WBC Middleweight Titleholder Jermall Charlo for the title in 2019 after defeating Shane Mosley Jr. to win the Epix Television Series “The Contender.” Adams boasts a formidable group of sparring partners, including Shawn Porter and Gennadiy Golovkin. Adams, who went professional inside of two years, is known for his fast rise within boxing. He started competitively training at age 19, fought his first amateur fight at age 20 and turned professional at age 21. Adams’ return to the ring Dec. 3 will be his first fight since his June 2019 matchup with Charlo. He is promoted by Banner Promotions and Tournament of Contenders.

“I appreciate this challenge,” Adams said. “Bohachuck’s team thinks he is ready to fight at the top level and my team is confident that I am already fighting at that level with the top fighters in the sport.”

Cleveland native Conwell, who competed in the men’s 2016 Summer Olympics middleweight event as an amateur, returned to the ring for the first time this year in February when he scored a fifth-round stoppage against Ramses Agaton. Known for his decisive punching power, Conwell recently capped off an impressive performance in the Oct. 7 main event of ShoBox: The New Generation with an eruptive knockout of Wendy Toussaint. A swift uppercut in the ninth round ended the contest and broke Toussaint’s nose in a fight that Conwell was comfortably winning. The highly touted super welterweight contender who is promoted by DiBella Entertainment, also reached a pivotal moment this year when he welcomed a daughter earlier this fall to become a first-time father.

“I’m happy to be getting right back in the ring to show my skill, class and dominance on NBC Sports Network,” Conwell said.

Ashkeyev, who fights out of boxing hotbed Oxnard by way of his native Kazakhstan, returns to face Conwell a year after his last fight in which he stopped Rodolfo Martinez at the end of the fifth round. Ashkeyev was an excellent amateur who participated in the World Series of Boxing. The undefeated Ashkeyev is promoted by Main Events and managed by Egis Klimas.

“I am very happy to have the chance to fight on NBCSN,” Ashkayev said. “I will be ready to make a big statement in my first televised main event in the United States and have waited a long time to show everyone what I can do.”

In Dec. 3 undercard action, former Olympic hopeful Ceballo, who is promoted by 360 Promotions, faces off against Gomez in a clash of welterweights. Perkins, who is the most recent U.S. Amateur World Champion boxer since Claressa Shields in 2016, is a formidable fighter who played Division I basketball at George Mason University and St. John’s University followed by a stint playing basketball professionally in Europe. Her basketball career came to an end when she suffered debilitating injuries after being hit by a car in 2008. The 6-foot southpaw made her professional boxing debut in 2014 after an impressive amateur career. She is managed by longtime boxing executive Mark Taffet, who has also guided Shields throughout her career. Perkins faces Hairston, who will fight just her second professional fight after winning her debut via knockout in July of 2019.