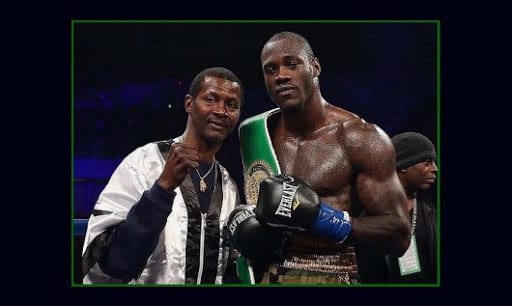 Breland took to Instagram to address being scapegoated and blamed by Wilder for his 7th round TKO loss to Tyson Fury in February,

Anyone who really knows me, knows I wouldn’t go back & forth with anybody UNLESS it’s in the Ring! I’ve been Boxing since I was 8 yrs old. So I didn’t give a big portion of my life to the sport, I DEDICATED MY ENTIRE LIFE TO THIS SPORT!

But I have never seen the things I’m seeing now in ALL of those years! I’m only on social media because of my girl. We went somewhere and there was a picture of me & we were very surprised & she said “this is one of the reasons you need social media in this day & time. She said there are people who have deep admiration for you & social media is a way to give them some access to you.

She asks me all the time am I tired of it, do I want to go back to life without it. I always say no..because the amount of support, love & gratitude I get let’s me know all the hard work I put into my career was worth it! I looked at & read thousands of videos texts & comments & I would put up a thousand of them if I could because so many of them was ??? but I can’t..but I do have a file for ALL of them that moved me.

I THANK ALL OF YOU FOR YOUR WORDS! I chose this one because it hit most of the marks & said like only he could! Thanks Teddy Atlas let me add this last…The Twitter pic that’s out there is not from me.it’s not how I speak & there’s nothing funny about this show that’s going on! Stay tuned! Stay well & I’m still standing! ??

Breland was making reference in his post to a video by famed trainer/boxing analyst Teddy Atlas.

Atlas was defending Breland’s handling of stopping the Wilder fight when he did, and went so far as to say on his video show/podcast: “Breland was the only guy in that corner who cared about Wilder.” And further that “he saved Wilder from getting seriously hurt.”

Wilder, now 42-1-1, 41 KOs, took to social media himself late last month and in a video blasted Breland, who had been in his corner for his entire rise to the WBC corwn, publicly for the first time.

“In the end, it took a ‘crap in the bucket’ referee (Kenny Bayless) and a disloyal trainer (Breland) throwing the towel in, just to stop me,” Wilder barked on the video.

Wilder went on a podcast later that weekend and outright accused Breland of putting something to “spike my water” in between rounds. Wilder hinted that it was a muscle relaxer that weakened him as the fight continued.

For all the excuse making after his first pro loss, Wilder had initially defended Breland in the days after the defeat. But, in early October it was confirmed by his business manager Shelly Finkel that Breland would no longer train him moving forward.

Breland rarely gives interviews and hasn’t had anything to say for the last few months, while his decision to throw the towel into end Fury domination of Wilder caused controversy in the Wilder camp.

It’s unclear when “the Bronze Bomber” will be back in action, as Fury has decided to move on, for now, from their third fight that had been tentatively scheduled for December in Las Vegas. Fury wants to fight December 5th and the likely opponent will be Kurdish-German Heavyweight, Agit Kabayel.

Ball looking to shine in title bout against Guanini
Bohachuck, Conwell in action on Ring City Cards
Advertisement
To Top