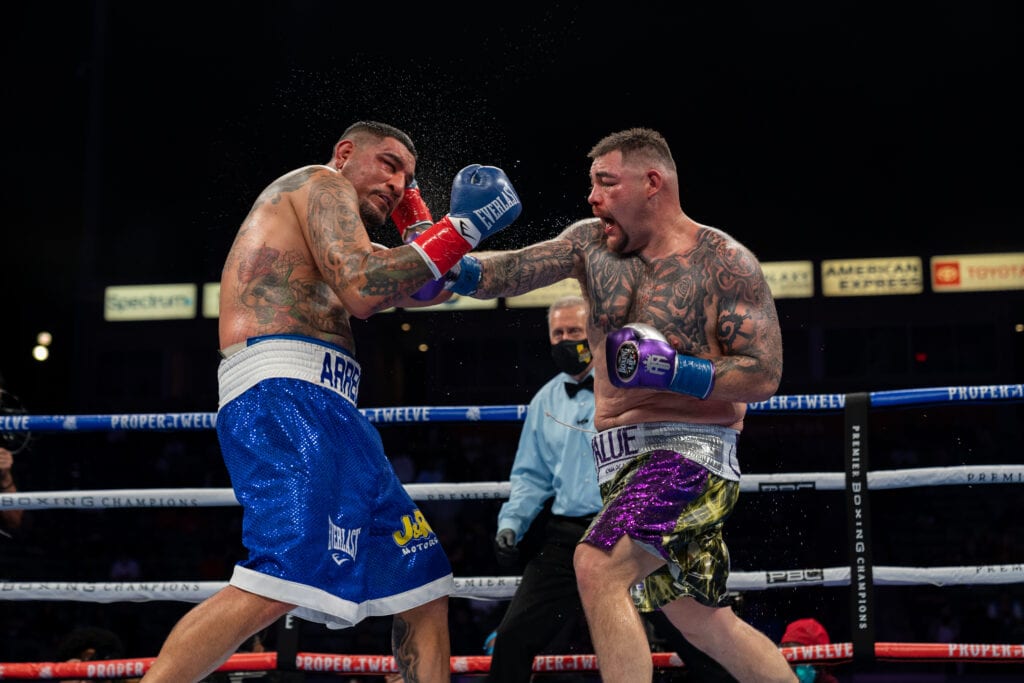 Andy Ruiz Jr. wasn’t in the ring since 2019 and had some rounds to work out the kinks against Chris Arreola, winning by unanimous decision after a very rocky start.

The main event fight labeled as the battle of Mexican heavyweight supremacy in front of a capacity allowed sellout of 3,940 fans at the Dignity Health Sports Park in Carson, California, was a fun one that closed out the Fox pay-per-view broadcast. The biggest storyline going into this contest was the shape that both men came into since their last fight as Ruiz came in slimmer than his rematch against Anthony Joshua and Arreola in the best shape of his storied career.

Ruiz was sent down by a clubbing right hand in the second round, and from there, this fight picked up quickly. Arreola spent the rest of the round trying to close the show, but Ruiz survived the round. The third round started more of the same for Ruiz as he was stunned early by a right hand from Arreola.  In the early rounds, Arreola was able to time up Ruiz on numerous occasions when he was able to come in.

.@nightmareboxing sends Andy Ruiz Jr. to the canvas in RD2 with an overhand right. #RuizArreola

In the sixth round, we saw the fast hands that Ruiz has by popping Arreola early in the round when both guys were in range. The lack of output from Arreola was starting to mount up by this point, as while he was up and firing in the second, he fell back into losing exchanges and the pace of the fight. By the ninth round, the broadcast noted that Arreola was slowing down, and Ruiz was timing his shots better.

Arreola took a solid shot from Ruiz on his shoulder in the eleventh round that caused him to grimace. At this point in the fight, it was clearly bothering him, and he wasn’t able to have the same pop on his jab from earlier. Referee Jack Reiss asked him after the end of the round if his shoulder was okay, and Arreola responded by saying, “No, it’s f—– up .”

So what is next for Ruiz? The next likely target, Luis Ortiz, was in attendance watching the fights and speaking with Mike Coppinger told him that he would likely be next up.

Caught up with Luis “King Kong” Ortiz, he told me he’s here to check out Andy Ruiz and is confident he’ll land a fight with him next. Love that matchup. Ortiz’s only losses came to Deontay Wilder and he was winning both fights handily before the KO #RuizArreola pic.twitter.com/7xD5YEBBMs