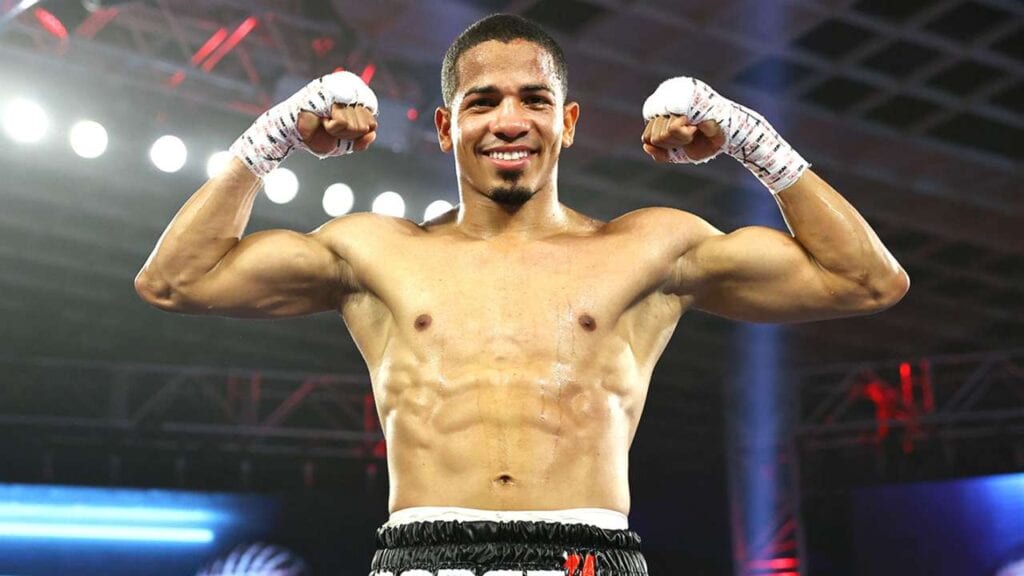 On Sunday night, what appeared to be an inevitable formality happened in Puerto Rico, as lightweight contender Felix Verdejo turned himself in to Federal authorities on charges of carjacking, kidnapping and the murder of 27 year old Keishla Marlen Rodríguez Ortiz, found dead in a lagoon Saturday.

Verdejo appeared just before 9 p.m. Puerto Rico time with his attorney at the FBI offices in the Hato Ray section of San Juan and was taken into custody charged with killing of the woman, who allegedly had gone to tell him Thursday morning that she was pregnant with his child.

According to the paper, federal agents and San Juan police criminal investigators had been keeping surveillance on Verdejo Sunday, while the evidence collected at the scene of Rodriguez Ortiz’s death Saturday continued to be processed.

The coroner in San Juan made positive identification of Rodriguez Ortiz Sunday morning, in part through dental records.

As we have written, there had been a frantic search for the young woman after she failed to show up for work Thursday and didn’t return any of her family’s calls or text messages. Rodriguez Ortiz’s mother told the San Juan CIC investigative officers that her daughter confirmed to her she was pregnant and had gone to tell Verdejo.

Rodriguez Ortiz’s family, which had been pleading Thursday and Friday with Verdejo and the public to help with the search for Keishla, came to the scene on the water near Carolina, Puerto Rico, Saturday with authorities. That was, once there was confirmation that it was a blond female matching her general description found in the lagoon.

They waited for several hours, while forensic technicians and a local prosecutor investigated the scene, in and around the water for clues and evidence of the death. The body was removed around 5 p.m. local time and according to El Vocero, taken to the Institute of Forensic Sciences crime lab in San Juan for further identification and examination.

Also, the paper reported that San Juan authorities have obtained surveillance video from Thursday morning for the bridge over the lagoon, where the body was found. That video reportedly shows a Dodge Durango SUV, just like one that Verdejo owns, dumping what looks like the body into the lagoon.

There is reportedly an accomplice in the case who is apparently cooperating with investigators about his and Verdejo’s involvement.

On Friday mid-day, Verdejo appeared with two attorneys at the San Juan police headquarters, but refused to answer any of the investigators questions. That included, refusing to confirm a relationship with her, much less, if he had been with her or where?

However, a San Juan police source confirmed to El Nuevo Dia newspaper Friday that they have cell phone records of multiple calls from Rodriguez Ortiz’s phone to Verdejo’s phone on Thursday morning around the time of her disappearance.

Further, Verdejo’s wife confirmed their relationship to them Thursday night.

El Vocero further reported that Marlen Rodriquez Ortiz’s wallet, ID, an iPad and more personal items were in the vehicle. They also reported that a fire-rescue, dive team searched the waters by the car for her without finding anything.

That changed Saturday with reports of a deceased woman found in the water .

A more formal announcement of the charges is expected either later Sunday night or Monday morning. The U.S. FBI and the U.S. Attorney’s office based in San Juan is involved because of the high-profile nature of the case and the serous charges of kidnapping and murder that Verdejo is facing.

He reportedly could be facing the death penalty, if convicted of the most serious crimes.

However, his boxing career is obviously no longer a priority, as the developments of the last 72 hours in Puerto Rico continue to unfold.

Andy Ruiz Outlasts Chris Arreola In Carson
Lara Makes Quick Work of LaManna
Advertisement
To Top
We use cookies to ensure that we give you the best experience on our website. If you continue to use this site we will assume that you are happy with it.OkPrivacy policy