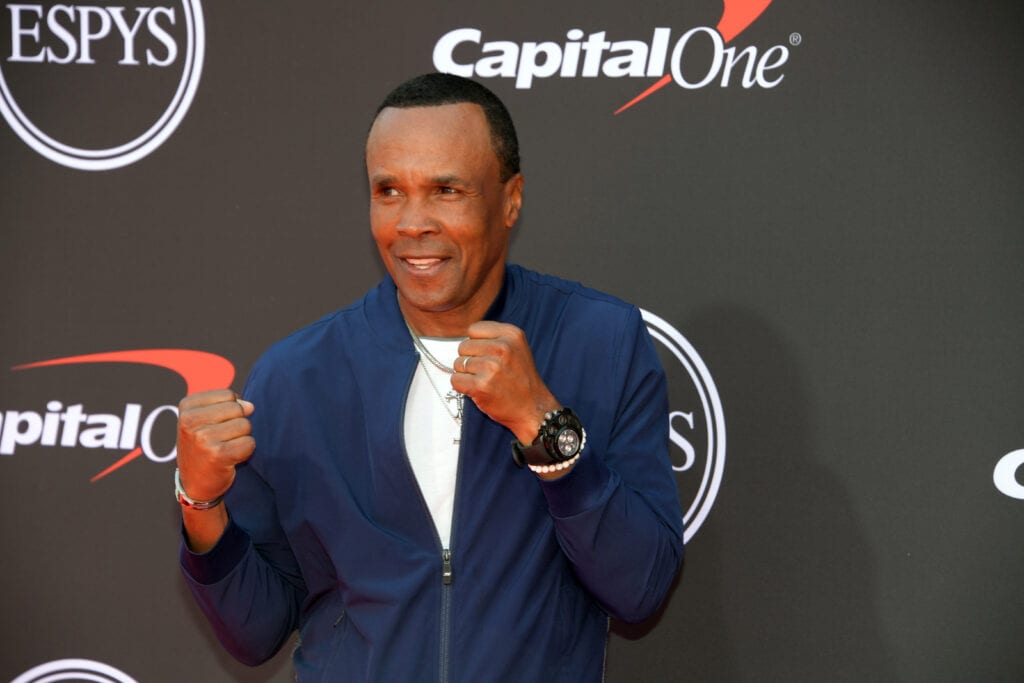 On November 25, 1980, the Louisana Superdome in New Orleans, Louisana, was rocking as the huge rematch of Sugar Ray Leonard took on Roberto Duran in the second contest of their trilogy.

To catch you up to speed, the first match named now The Brawl in Montreal lived up to its title took place earlier in June of 1980, which saw Duran win an all-out war by unanimous decision and was coming into the champion of this one. Leonard, having suffered his first professional defeat, was on a quest for revenge and to gain his WBC Welterweight title back from Duran.

You know it is a big fight feel when Ray Charles is singing “America the Beautiful” before the action begins in the ring. Excellent rendition, too, which is in the video below of the fight called by iconic broadcaster Howard Cossell.

The biggest takeaway from the first fight was that Leonard didn’t fight his style of fight and stood toe-to-toe with Duran. Made for awesome action, but was not his style of boxing and cost him the match.

That was all changed in the second fight.

For Leonard the second time around, he was quicker than Duran and using his movement to his advantage. Anytime that Duran would get Leonard on the ropes, Leonard would stick and move away from Duran. Different from their first contest and one that saw Duran take jabs from Leonard, all fight. Not only was Leonard able to land more, but Duran also wasn’t able to land with as much success. Leonard averaged 29 thrown punches per round, and 17 connects, while Duran averaged 43 thrown punches and eight connects.

This however was not to say that Duran was completely blown out in this fight. Duran had a lot of success finally cutting off Leonard and coming inside in the third and fifth rounds of the contest which had plenty of back and forth action. It was shaping up to be another classic.

You can tell that Leonard was frustrating Duran in this fight, especially in the seventh round, as he was taunting him while landed at will. Then in the closing seconds of the eighth round, Durán turned his back to Leonard and quit, waving his glove and saying to referee Octavio Meyran, “No más” (“No more” in Spanish). Leonard was then crowned the winner by a technical knockout (TKO) at 2:44 of round 8, regaining the WBC Welterweight Championship. 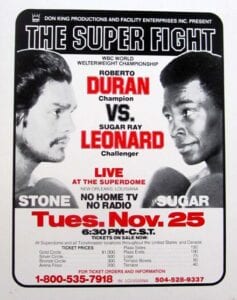 Duran, since this fight, has questioned that he had quit and had said he had quit in the match.

In the ESPN documentary No Mas, Duran said he didn’t say “No Mas.” He told Howard Cosell, “made that up.” However, referee Octavio Meyran said Duran did say those now infamous words. “I said, ‘Fight!’ in Spanish,” Meyran stated in the documentary. “He said, ‘No more.’ I ask again to continue boxing so I can assure myself and not commit an error. And Duran said, ‘No more.’ “.

Leonard said after the fight, ” “I did everything I said I was going to do, and he couldn’t accept it. He was frustrated, confused. I did everything I could to make him go off like a clock wound up too tight. He got wound up so tight, he blew a spring. . . . I made him quit. To make a man quit, to make a Roberto Duran quit, was better than knocking him out.”

At the time of the stoppage, Leonard was up on all three scorecards, (68-66 x 2 and 67-66) so it wasn’t a runaway by any means but more of the fact that Duran couldn’t hang with Leonard who wasn’t going to stand flat-footed with him like the first contest and exchange.

This Don King Promotion at the time was seen on closed-circuit at the time, which was shown on ABC a month later on December 19th (The Youtube video is that tape-delayed broadcast). Signs of the times as they paid more than $2.5 million for the rights, which was the highest fee ever paid for a delayed telecast.

These two would scrap one more time against each other in 1989 in what would be another win for Leonard, but on this day, he not only got a win, he made his man quit in front of him.