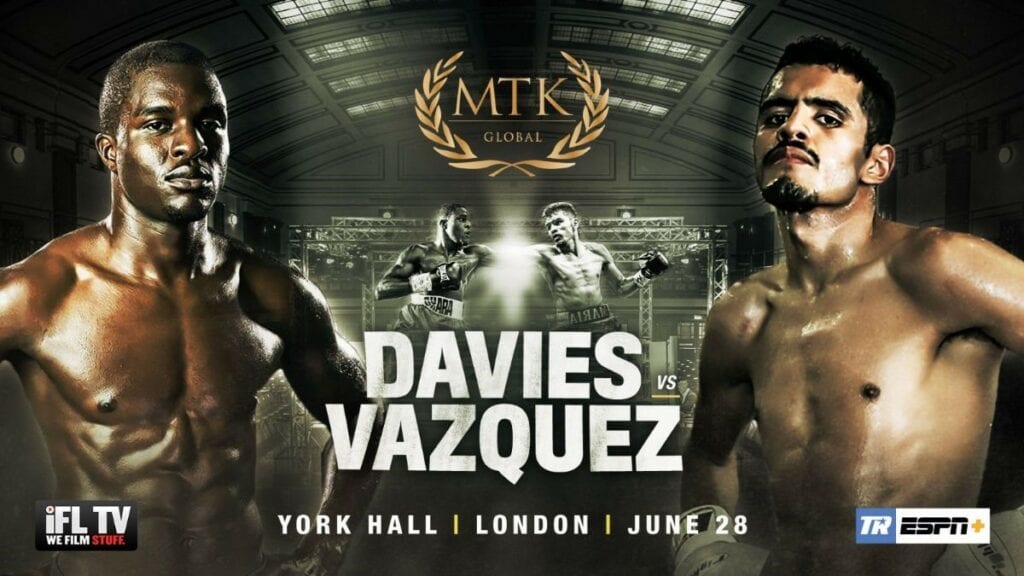 British featherweight champion Ryan Walsh will make the sixth defense of his title in a 12-round showdown against the unbeaten Lewis Paulin on the latest edition of #MTKFightNight Friday, June 28 at York Hall in London.

Paulin (12-0, 3 KOs), from Edinburgh, Scotland, is taking a massive step up in class, as he has only two wins against foes with winning records. He is two fights removed from winning the Scottish featherweight title via decision against then-unbeaten Stephen Tiffney.

Davies (18-2, 14 KOs) turned pro in 2014 following a brief amateur career and became one of Great Britain’s leading prospects following a 15-0 start to his pro career. He stumbled in a bid for the Commonwealth super lightweight title against Josh Taylor, suffering a pair of knockdowns en route to a seventh-round stoppage loss. Davies rebounded with a trio of wins before dropping a competitive decision to Jack Catterall last October.

Vazquez (41-7, 15 KOs), from Guadalajara, Jalisco, Mexico, famously lost a split decision to Canelo Alvarez in his professional debut in 2006. In August 2010, he won the vacant IBF world lightweight title with a unanimous decision over Ji Hoon Kim. He would go on to defend the title six times before dropping a razor-thin split decision to Mickey Bey in September 2014. He is 7-3 since losing the world title, most recently upsetting Ghislain Maduma by split decision in Maduma’s adopted hometown of Montreal.

We've got some more @MTKGlobal action this week! Ryan Walsh makes the 6th defense of his title against unbeaten Lewis Paulin, and Ohara Davies takes on former lightweight world champ Miguel Vazquez ?#MTKFightNight is back this Friday, June 28 on @ESPN+ starting at 3PM ET! pic.twitter.com/gB9WvKZVdT

Friday’s stream will also include:

In a 10-round showdown featuring a pair of unbeaten super lightweights, Daniel “Danny Darko” Egbunike (4-0, 3 KOs) will take on Martin McDonagh (5-0, 0 KOs).