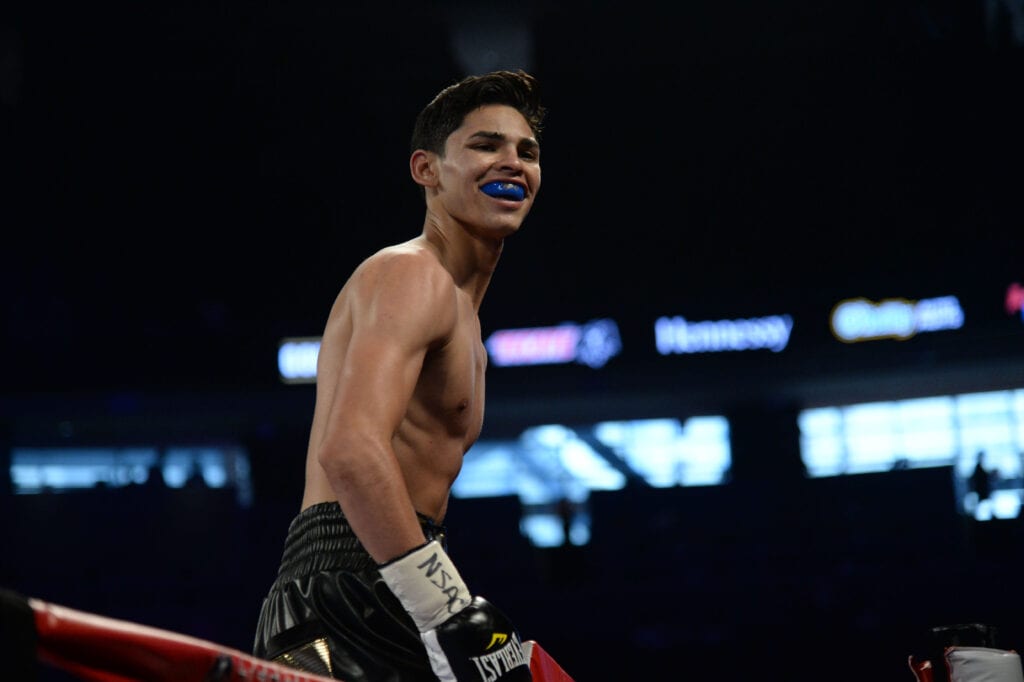 Exciting lightweight prospect Ryan Garcia will seek to get closer to a world title shot when he returns against Jose “Wonder Boy” Lopez in a 10-round bout that will be the main event in a night of action promoted by Golden Boy Promotions. The event will take place on Saturday, March 30, 2019, at the Fantasy Springs Resort Casino in Indio, Calif. and will be aired live on the streaming service DAZN.

Garcia (17-0, 14 KOs) is a upcoming talent who had a great year in 2018, fighting four times and scoring the NABF and NABO Super Featherweight Titles. The 20-year-old native of Victorville, Calif. in his last fight stopped Braulio “El Chavo” Rodriguez in the 5th round. Garcia plans to place his skills on display as he looks to climbs the ranks for shot at a title.

“I’m excited to come back for my first fight of 2019,” stated Ryan Garcia in a press release. “We sold out Fantasy Springs last March when I knocked out Fernando Vargas, and I expect this fight to be exactly the same: a big win in front of a huge crowd. Let’s get this win!”

Lopez (20-3-1, 14 KOs) is the 24-year-old contender who has earned two regional titles since making his professional boxing debut in September 2011. The native of Carolina, Puerto Rico has taken on competition the likes of Orlando “El Olimpico”Cruz and Avery Sparrow. Lopez’s biggest win was against Miguel Angel “Miguelito” Gonzalez in April of last year but is looking to rebound after losing to Jonathan Oquendo in the third round by knockout last October.

“I’m very excited for this opportunity,” Lopez said to the media  “Ryan is a great fighter and a top prospect at Golden Boy. I know the challenge that I have in front of me, and I am getting ready to make a great fight. I will get the victory no matter what.”

Ryan Garcia Vs Jose Lopez! Also the fight in the video is from my most recent fight! Im fighting Jose Lopez next a Puerto Rican with the record of 20-3 and 14ko’s so should be a good one ? Live on DAZN @dazn_usa • • • • Be there live at Fanstasy Springs casino in Indio ca ?? Gets your by going to FantasySpringsCasino.com Or calling the casino and asking to purchase tickets! I want this to have the craziest energy and best crowd for a fight ?Tag your friends and let them know the tickets are live!!!! #ryangarcia #boxing #boxeo #march30 #kingry #sport

Alvarez-Jacobs press tour to start next week
Truax, Quillin to square off in April
Advertisement
To Top