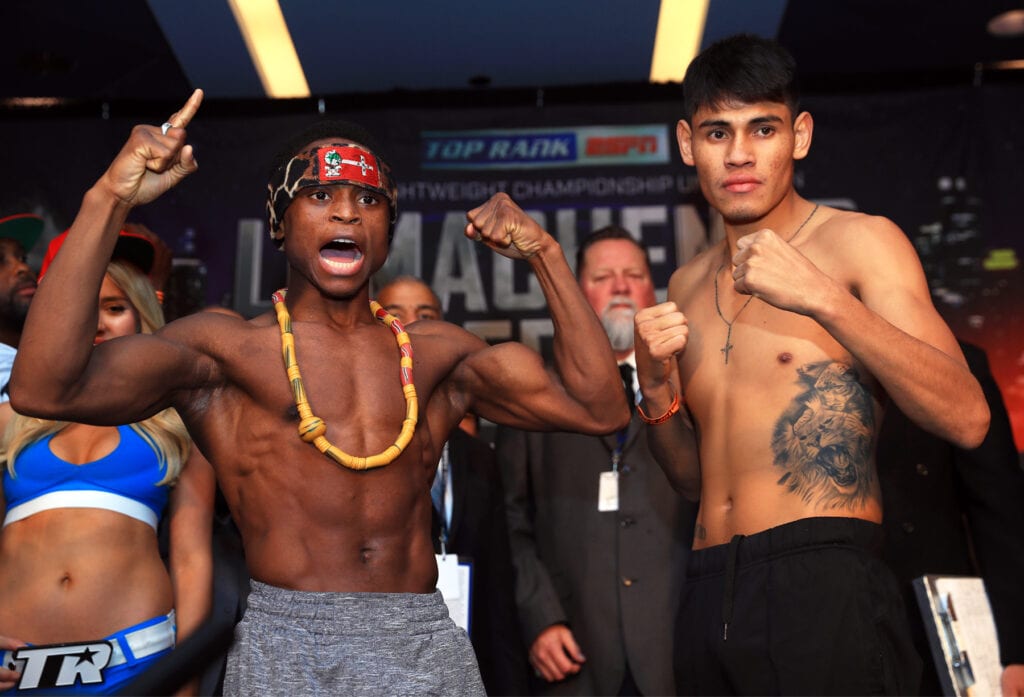 Navarete, Dogboe set for title rematch in May

In the co-main event of the Miguel Berchelt and Francisco Vargas fight, WBO junior featherweight world champion Emanuel Navarete will look to repeat again when he defends his title in an immediate rematch versus Isaac “Royal Storm” Dogboe, whom he defeated by unanimous decision last Dec. 8 on the Vasiliy Lomachenko-Jose Pedraza card.

Navarrete (26-1, 22 KOs) has won 20 consecutive bouts, bursting onto the world scene with his shocking upset of Dogboe. In their initial contest, he pressed the action and busted up Dogboe to notch the well-deserved decision. A two-fisted power puncher, the Dogboe victory ended his knockout streak at eight.

“I am ready to show the world that our first fight was no accident,” Navarrete said. “I am the better fighter, and I will show that again. Dogboe made a mistake in taking this rematch.”

Two BIG fights, two BIG rematches. #BercheltVargas2 and #NavarreteDogboe2 are coming to Tucson, AZ on May 11 on @ESPN and @ESPN+ pic.twitter.com/4K6ar3V52t

Dogboe (20-1, 14 KOs), 24, emerged in 2018 as the latest in the long line of fan-friendly Ghanaian champions. A member of Royal Badu family of Anyako in the Volta Region of Ghana, Dogboe snatched the WBO junior featherweight title from Jessie Magdaleno in April 2018, coming off the deck in the opening round to stop Magdaleno in the 11th. He defended his title in August, steamrolling Hidenori Otake in one round. Then, he ran into the upset-minded Navarrete, who put a halt to Dogboe’s belt run.

“Look, in my last fight, I wasn’t fit. I underestimated Emanuel Navarrete,” Dogboe said. “But you know something, at my lowest, he couldn’t knock me out. This fight, May 11, it’s a guarantee: Isaac Dogboe is here to set the record straight. Tucson, it’s going down. You don’t want to miss this fight. It’s a fight people are going to be talking about for a very, very long time. A fit Isaac ‘Royal Storm’ Dogboe is a dangerous Isaac ‘Royal Storm’ Dogboe. May 11, I’m coming for my title!”

Berchelt, Vargas rematch set to takes place in May
Easter Jr, Barthelemy square off in title fight
Advertisement
To Top