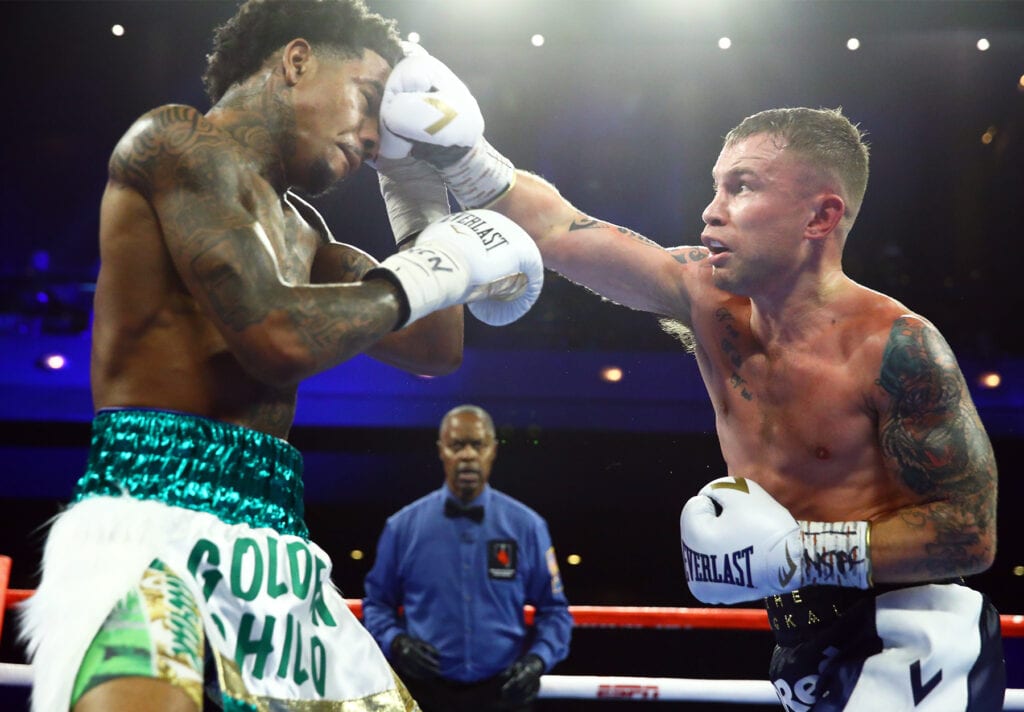 Carl Frampton said before the fight that he would retire if he couldn’t get past a guy like Tyler McCreary on Saturday night. In his Top Rank Boxing debut, “The Jackal” isn’t hanging them up anytime soon as he cruises to a comfortable unanimous decision victory.

Frampton (27-2, 15 KOs ) knocked down McCreary (16-1-1, 7 KOs) with a body shot in the sixth round and again in the ninth round with a pair of left hooks. Despite McCreary having a considerable reach advantage over Frampton, he wasn’t able to keep him at bay and was systematically broken down as the night grew on.

Frampton after this victory seems to be aligned for a title shot against WBO junior lightweight world champion Jamel Herring next year who ringside for the event.

“I was happy. That was the plan, to target the body,” Frampton said. “Tyler is pretty tall. We’ve seen that he’s left gaps. My hand wasn’t great coming into the camp as well. It’s always a bit softer hitting the body than the head. I feel like I hurt it again in the second round, so that’s why it wasn’t the most exciting fight in the world, but I just cruised to a points win. I just wanted to be safe with my hands.

One revelation that was made by Frampton in his post-fight interview is that once again, his hands were injured.

“I re-fractured the hand twice in camp, but I knew a lot of people were coming to support me. There was absolutely no way I wasn’t fighting. I know {Jamel} is the champ. I just want to fight for a world title next. I want to be involved in big fights. I would love the opportunity to fight Jamel. I’m not the champion. He’s the champion.”

Herring met Frampton in the ring was asked beforehand about the prospects of facing him.

Herring stated, “Wherever, whenever, I want to fight Carl Frampton. We’re under the same promotional umbrella, so it shouldn’t be a problem.”

Frampton and Herring seem to be a lock to square off in 2020, just a matter of when and where for these two.

Valdez defeats Lopez in featherweight debut
Teixeira outlasts Adames in war to capture title
Advertisement
To Top
We use cookies to ensure that we give you the best experience on our website. If you continue to use this site we will assume that you are happy with it.OkPrivacy policy