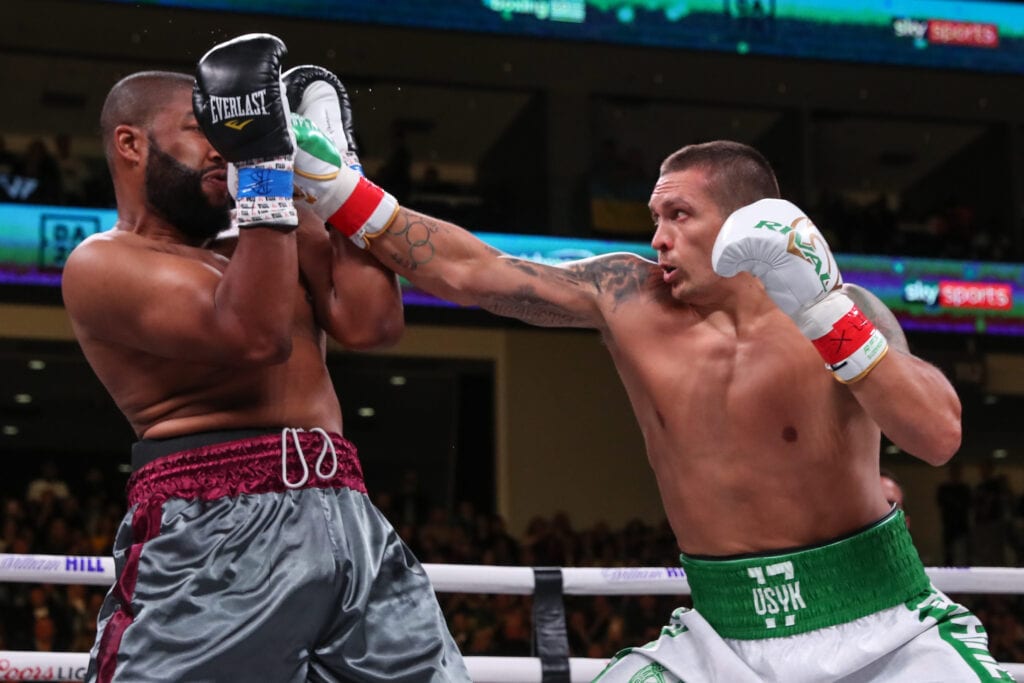 The Windhurst Arena in Chicago was treated to not only the one year birthday of broadcasting streaming service DAZN, but also the heavyweight debut of Oleksandr Usyk taking care of late replacement Chazz Witherspoon by TKO after the sixth.

The 9,073 who packed the arena was riled up for this one as chants of “Usyk! Usyk” were heard as he entered the ring. In the ring, it was just a practical and systematic performance by Usyk.

Witherspoon was a late replacement for Tyrone Spong, who had an adverse finding in his first drug sample and was pulled from the fight. Spong had his later samples come back negative, however but was still taken off the marquee for this one.

A fun note about Witherspoon, the second cousin of former partial world heavyweight champ of the 1980s, Tim Witherspoon, was before the opening bell of the bout. That’s when his original gloves didn’t fit, and they made a note to mention during the broadcast that they had to find new ones:

According to @ClaudiaTrejos, Chazz Witherspoon's gloves didn't fit. Therefore, he must change to a larger pair. #UsykWitherspoon pic.twitter.com/uxONhQvaxC

While this was a slow start for the undefeated Usyk in his heavyweight debut, this fight went longer than expected against a last-minute replacement.

The first two rounds of this bout were slow ones with nothing much happening in the contest. The third was completely different, however, as he was able to land straight shots and moving around more freely and almost running circles in the ring around Witherspoon.

By the halfway mark of this contest, you could see that fatigue was setting in for Witherspoon, who in his last match in March, had only gone two rounds. Usyk, at this point, was able to keep Witherspoon in the corner and was letting his hands go. At the end of the sixth round, Witherspoon, in his corner, put an end to this one, giving Usyk the TKO victory.

The final punch totals reflected the one-sided matchup as Usyk was throwing more than Witherspoon. At one point in the sixth and final round, Witherspoon only had landed a total of 19 punches

After the fight, Usyk said through a translator, “I was ready for this moment. I had some difficulties as we had to change opponents.” Usyk also stated that he was ready for the big-name heavyweights next year.

We’ll see where he goes from here as he is still the WBO mandatory as we await the winner of Joshua-Ruiz. Usyk in this performance wasn’t a reliable barometer if he’s ready for any of the big names at heavyweight.

Baranchyk, Ceballo deliver stoppages at The Garden
Is Usyk ready for the big names at heavyweight?
Advertisement
To Top