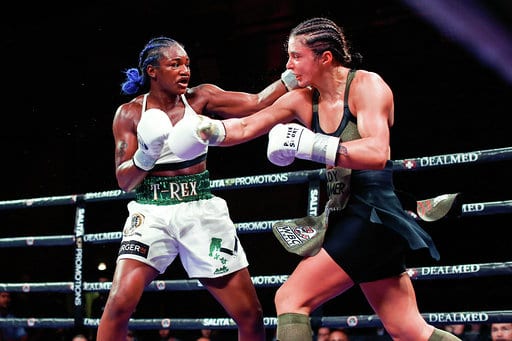 It had been billed as the biggest and most competitive women’s Title fight in boxing history. But, in the end, Michigan’s Claressa Shields turned it into a one-sided joke with a 10-round easy unanimous decision win to capture all the World Middleweight titles in defeating previously unbeaten Christina Hammer.

In doing so, Shields became the first unified middleweight champion and now holds the WBA, WBC, IBF and WBO belts with her impressive victory.

Hammer, now 24 – 1, actually appeared to win the first round using her height and left jab. However, from then on, Shields, who’s now 9-0, dominated as the aggressor by moving forward, landing jabs of her own, plus right hands and left hooks behind them, repeatedly.

Shields continued to pile up the punches and gain confidence, putting round after round in the bank. She also easily backed the bigger Hammer up and forced her to hold on repeatedly, as her only defense.

In the end, the stats bore out how dominant Shields was. She landed 94 power punches to just 24 for Hammer, who was born in Kazakstan but now fights out of Germany. The final tally for Shields was 112 overall landed to just 49 for Hammer through the 10 Rounds.

Shields very nearly ended the fight late in the eighth round with a barrage of rights and lefts along the ropes, where Hammers’ nose was bloodied and she was wobbly.

The referee looked closely at potentially stopping the fight, but Hammer survived to the bell.

Hammer stayed upright for the remaining two rounds, but looked almost exhausted, especially in the tenth. Meanwhile, Shields appeared to be in much better shape, was still fresh in the late rounds and scoring repeatedly

All three judges scored the fight 98 – 92, or 8 rounds to 2, for the new Undisputed Champion Shields.

Shields was heard of the Showtime broadcast just after the final bell, yelling “I’m the greatest women’s fighter of all time!” and continued with “She didn’t win a round off of me. She didn’t win, a round!”

In the end, the fight was a bit of a disappointment, especially when Hammer came in regarded as the more experienced fighter with more championship wins. Yet, she offered very little, and got overwhelmed by Shields all night at the Boardwalk Hall in Atlantic City.

Shields told Showtime in the ring after the fight about being cautious early,

“I was calculating. One, what’s her jab like? Two, how fast is she? What can I do? What can I counter off of? I saw her right hand was telegraphed. So I was just calculating.”

Then, when she was asked about coming on strong in the middle of the fight,

“I knew I could hurt her. There were times when I hurt her, and I was like ‘I don’t want to finish her, yet.'” Shields continued, “she held me excessively. I just told myself ‘stay cool, stay calm.’ I was trying to get the perfect punch to get her out of there. I did everything I wanted to do. Give me my credit! I won every round!”

It’s tough to argue with any of that after the way Shields backed up the bravado on Saturday night.